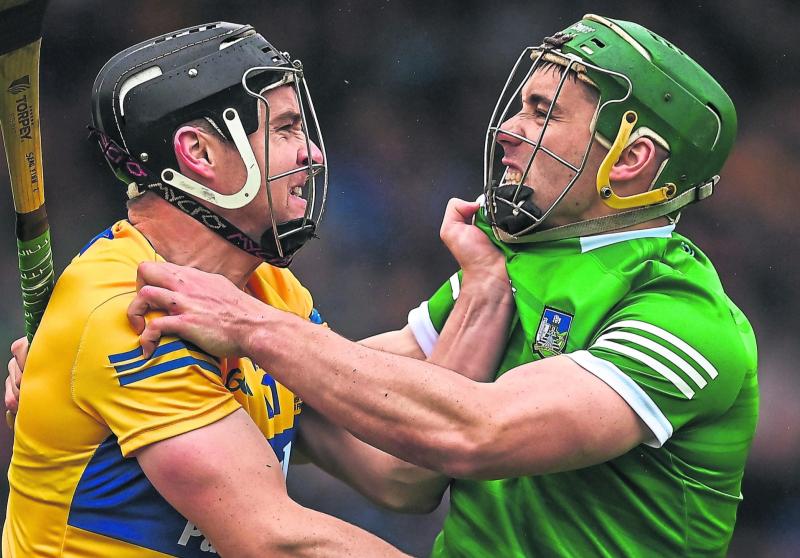 IT'S not often I call games right, but I just had a feeling that Sunday's Munster hurling final was going to be a be a humdinger.

It had every ingredient for it to be, and it didn’t leave us down! Growing up as I kid, I was never fortunate enough to see limerick competing in Munster finals.

I remember 2007, and going to Thurles in more hope than belief, and big Dan Shanahan ensured it was only ever going to be hope.

When the Munster final came again in 2013 I was so privileged to be part of that special occasion. And in the last number of years, it's dreamland stuff really.

There are many, many things I love about Limerick. But it’s the people of Limerick, the mindset and true love for sport that brings us all together.

Some might say that over the last few years and being successful that the appetite may not be the same and it would be easier to sit down at home, save a few bob and watch the game on TV. Like many counties do after success.

Limerick? Not at all. If anything, the appetite looks as if it growing greater and stronger. The turnout of Limerick supporters on Sunday, the overpowering emotion at the final whistle, was as if it was our first Munster title in many years.

The passion from both on and off the field. And I can tell you for sure the players feed off of that.

The times we are in now may finish this year, next year, five years time, whenever. I hope it keeps going for a long time.

But I can tell you one thing, having grown up watching Limerick being unsuccessful, I don’t take any of these times for granted and I never will.

Working in Dublin on Sunday night meant I couldn’t attend the game, but getting a few videos from the lads and looking at the Buff’s stories gave me a real insight into what the atmosphere was like.

The rain didn’t dampen the spirits one bit, on or off the field. I thought early on that Limerick looked like they were in trouble. I never felt comfortable at all and I thought Gearoid Hegarty's goal was absolutely vital - and absolutely class.

Seamus Flanagan has had a real topsy turvy year to date, getting sent off in the League, breaking his thumb, then was poor in Ennis, but by God did he come alive in Thurles on Sunday.

Rory Hayes was probably the best corner back in the country up to last Sunday, but a day when you are taken for eight points is not a good day.

People have said to me that Hayes had a good game and did well on the ball, but as a defender, your first job is to man your mark and not allow him score, and he didn’t do that.

Aaron Gillane was being marshalled by Conor Cleary until the referee eventually pulled Cleary for off the ball pulling and dragging, and when he was booked, Gillane took over, at a time when he was needed.

I said last week that I would put Kyle Hayes back the field and my thoughts on that haven’t changed. I just think he is better facing the ball and while the work he does up top is relentless, he hasn’t been as involved in games as he was in half-back.
If a Hurler of the Year had to be chosen at this moment, I think Barry Nash would be my first choice. Game after game, he is just so solid.

His pace to get up and back the field and he distribution and calmness on the ball is brilliant. He has taken the modern day corner back role to a new level.

I think the conditions on Sunday wouldn’t have suited us as much as Clare. Diarmaid Byrnes wasn’t able to get his shots away, and it was harder to play hurling in those conditions. Now, to give Clare credit, maybe Diarmuid and the likes couldn’t get the shots away because of the Clare workrate.

In the last few years we have been lucky to be winning games by bigger margins. But when the game got into the nitty gritty and the lads had to put all hands on deck, that character and courage shone through.

So all roads now lead to Croker and an All-Ireland semi-final on July 3. I personally think that the lads will grow an extra foot over the next few weeks.

The winter, the slog, the cutthroat nature of Munster championship, is all behind us.

The hard months are over, if that’s what you would call it. Coming into the middle of summer, with only 140 minutes in the way of Limerick retaining the All-Ireland title is the bit to enjoy.

The players will relish the next few weeks, it's what they thrive on. Hopefully Cian Lynch will be back fit, as could possibly Peter Casey and Barry Murphy.

You could say it may be the first time all year that Limerick may have a full panel to chose from. And talk about the timing of it.

At times I was worried watching the game last Sunday, but the boys found a way. That’s the sign of a great team.

And having a real competitiveness in training over the next few weeks will only bring them on, so dare I say it, the group could be in just a perfect position.