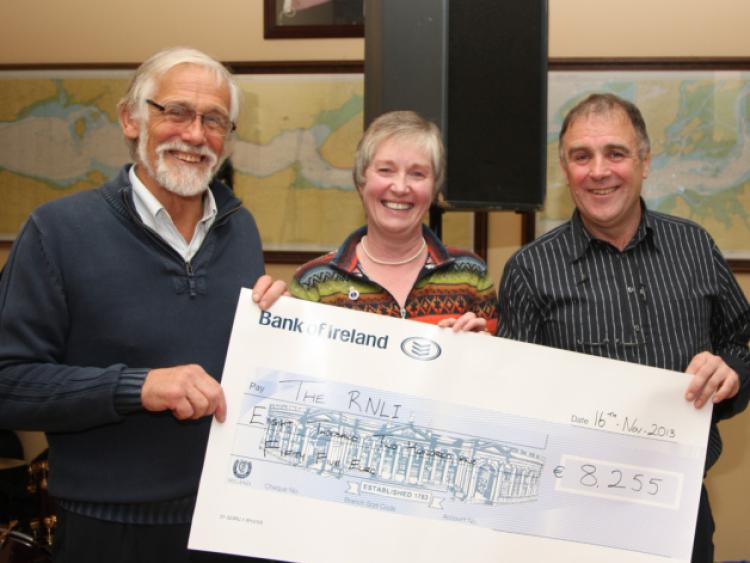 A PARTNERSHIP forged through cancer has been transformed, in the course of the past year, into a fast friendship and a bonanza of of almost €25,000 for various charities. Last May, sailors Chris Egan from and Dave Bevan from Bruff set off on a the trip of a lifetime, to sail around Ireland.

A PARTNERSHIP forged through cancer has been transformed, in the course of the past year, into a fast friendship and a bonanza of of almost €25,000 for various charities. Last May, sailors Chris Egan from and Dave Bevan from Bruff set off on a the trip of a lifetime, to sail around Ireland.

They were inspired to do so by their own personal experience of cancer: Chris had just come through treatment for Hodkins lymphoma while Dave, spurred to get involved because of his wife’s breast cancer, then discovered he had colon cancer. But even though he was still undergoing chemotherapy, Dave signed up for the 1200-kilometre trip.

Setting off from Foynes with their intrepid minder, Gerry Hutton, and joined along the way by different members of Foynes Yacht Club, the round Ireland trip took some eight weeks with just two breaks along the way. The first was after they reached the Aran Islands off Galway and hit a patch of bad weather and the second was in Cahersiveen, County Kerry to attend family events. Along the way also, they raised money for three charities: the RNLI, the Irish Cancer Society and the Mid-Western Cancer Foundation.

One of the great bonuses of the trip for both men was that it brought them to many of the locations around the coast where the RNLI has lifeboat stations and got a tremendous reception in all the different coastal communities they visited.

At a reception in Foynes Yacht Club to present cheques, Chris Egan said, “I am delighted we were successful in our round Ireland sail and that we managed to raise nearly €25,000 for three important charities. I class myself as a Mickey Mouse Sunday Sailor and it is a world away from my day job as a postman but it has been one of the greatest experiences of my life. “ .

“I also can’t thank enough all the generous people who sponsored us and raised funds, from a bag pack to a raffle, people really dug deep for charity. I’ve already put the RNLI on notice that we’d love to do it again, but this time going anti-clockwise. You never know.”

For his sailing partner and new-found friend, Dave Bevan, the trip was also a lifetime highlight. “ It was great. I am just waiting for the next episode,” he told the Limerick Leader, pleased that the year which began with such bad news had been transformed and was now ending with his all-clear. Go to Sail against Cancer Ireland on Facebook.