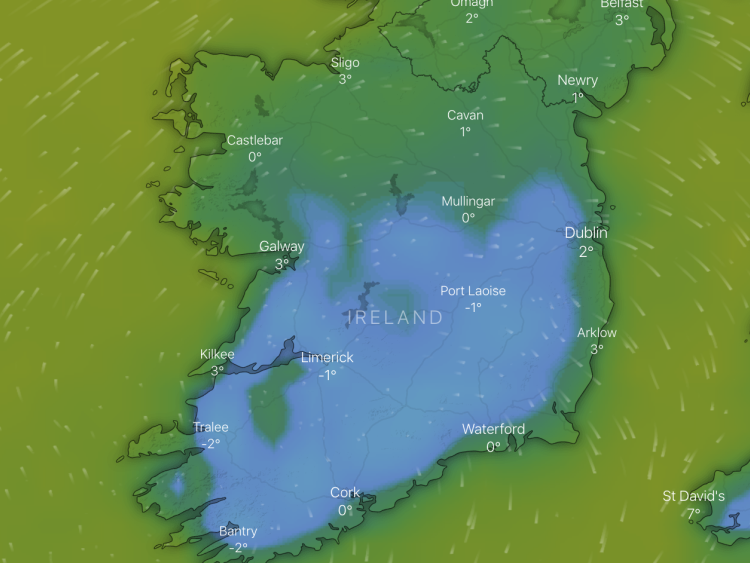 Limerick is to hit minus temperatures this week | Picture: Windy.com

THE FIRST week of December is set to bring much colder nights but don't count on any snow, according to Met Eireann's weather forecast for the week ahead.

Overnight and into Monday morning, temperatures will deep to as low as minus three degrees in some parts of the country.

Monday will be cloudy and dry but is likely to be bitterly cold, with highest temperatures of just two degrees in Limerick.

Tuesday will be partially cloudy for most of the morning and into afternoon, with maximum temperatures hitting nine degrees.

There will be spells of heavy rainfall on Wednesday, between 7am and 10am, but this clear up later in the afternoon, with maximum temperatures of nine degrees.

Thursday promises to be the warmest day of the week and mainly dry until 9pm when there expects to be a bout of heavy rainfall which is expected to last until 9am the following day. Showers will be lighter elsewhere around the country.

On Saturday, for most of the day it will be partially cloudy with maximum temperatures of nine degrees.

So what's the prognosis for the weekend? According to Met Eireann: "Hints of a drier more settled interlude on Saturday, but turning more unsettled into Sunday."