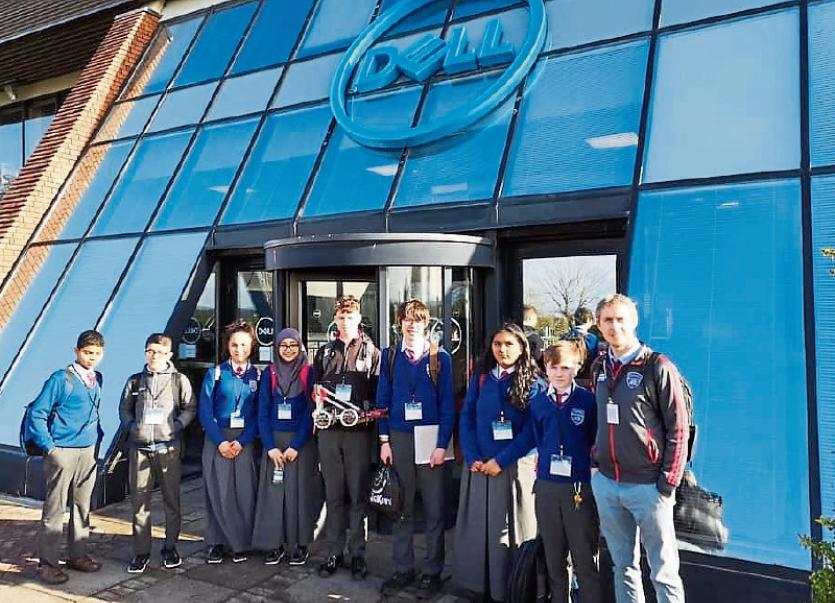 Members of the school's robotics club on their visit to Dell

The Team Limerick Clean up launch day was held on Friday April 19.

This day was also the fifth birthday of this event and there was a celebration held for the birthday before the cleaning started.

The celebration included Mickey and Minnie Mouse, music and bubbles all around which was an amazing way to start a day of cleaning limerick.

Paul O’Connell arrived at approximately 9:20 and greeted everyone that was there for the celebration as well as speaking about the event to those present.

Many young people arrived at the celebration. Some young people were representing their school behind a stall or donning the TLC high-vis vest ready to clean limerick

A record-breaking 21,000 people participated in helping cleaning their area with many others helping from that area together.

With this comes community building as well which is supported by participants coming together and eating food and drinking drinks such as coffee and tea and hot cross buns.

TLC has helped build communities in Limerick and has brought people together. When asked about the community building TLC does, Paul O’Connell said: “Maybe people don’t know their neighbours as well as they could or should and an event like today gives them that opportunity”

TLC has amassed over 80,000 people over the last 5 years and that proves just how big of an event it has become with Paul saying “it’s become a bigger event than we ever thought it would be”.

Cllr Butler also stated that “Mungret has an active and very good community council” which help keep the place clean and tidy.

ROBOTICS IN OUR SCHOOL

One of the major additions this year to Mungret Community College’s extra-curricular activities was the robotics club. Students from both first and second year have taken part in this excellent program supervised by teachers Mr Hill and Mr O’Connor.

The first years are currently involved in building and programming Lego robots, whereas most second year students are partaking in the VEX competition.

This involves them to build, program and control their very own robot for a VEX  Robotics Tournament.

As part of the program, the students also got to visit Dell Headquarters in the local business park where they qualified for a second round in Cork after Easter.

In this contest, they are paired with another team to compete against two other teams. The object of the game is to attain a higher score than the opposing alliance by high scoring or low scoring caps, toggling flags, and by alliance parking or centre parking robots on the platforms.

An interview with the participants and teachers stated that it is a great opportunity to explore different aspects of problem-solving and technology, in a manner that is easily adaptable.

Students also said that they would recommend this to newcomers as this is a very good way to interact and get to know one another better.

In Mungret Community College (MCC) we have a variety of different students which each have their own unique culture.

“It is a very diverse school and I wanted to be able to do something that celebrated all the different cultures in the school,” said Ms McGrath, our art teacher.

The project was a large jigsaw.

Each student got their own piece to work on but there was a theme to the art, a community learning together. The students had to come up with their own ideas for their individual pieces. The pieces was funded by the National Association of Principals and Deputies (NAPD).

The students worked on this project with Anne Fitzgerald who is a successful artist with international renown.

When the students were finished their pieces they were put together and made a large diverse jigsaw that represented everyone's own idea of community and the cultures of our school.

This year Mrs McGrath and her first years created a similar project with the main theme being diversity.

The students with the help of a professional artist, Stephen Murphy, learned the various techniques such as ‘Chinese brush painting’ and ‘Aboriginal Dot Art’ that they then used to design their circular piece.

The first step was to cover the wood with white primer that was supplied by our woodwork teacher.

We then brainstormed ideas for our final design that we sketched and painted onto our own pieces.  It now hangs in the main building of our school.