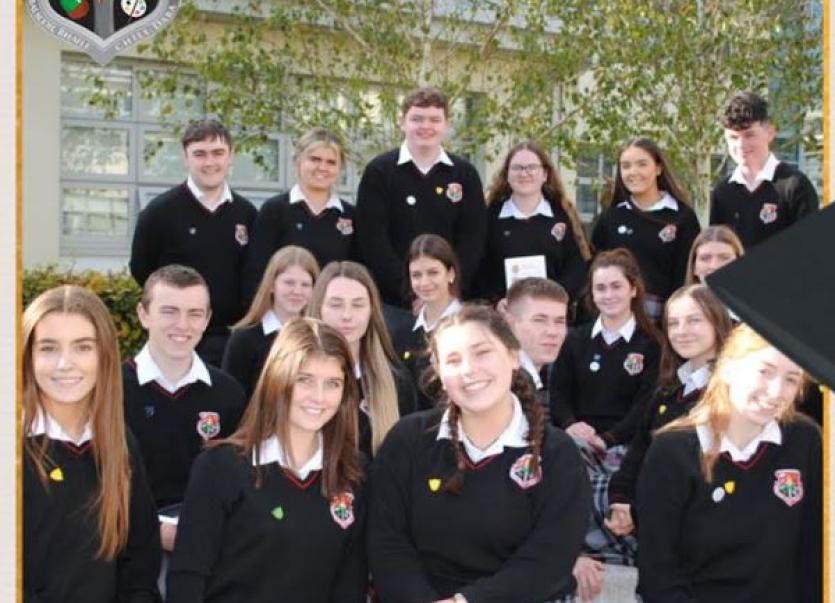 The KTCS Class of 2020 taken before the Covid-19 crisis

The event, which was meticulously planned for weeks, adhered to all Covid-19 guidelines. 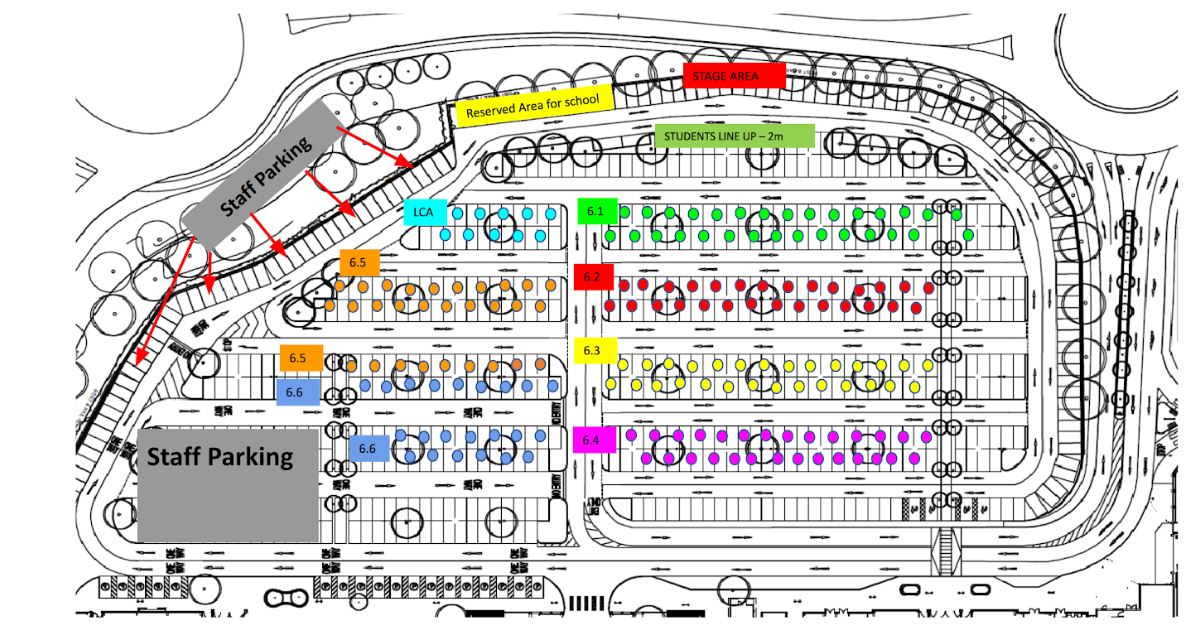 Principal John P Hayes said it was an outstanding community effort and thanked everybody involved in making it possible such as teachers, parents, volunteers, gardaí community leaders and Kildare Village.

Each graduate was presented with a personalised candle and scroll. 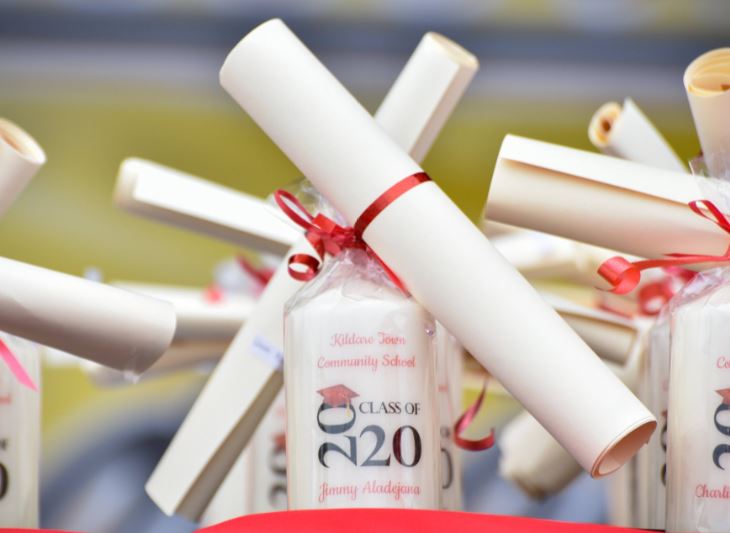 Mr Hayes said the event was unique in many ways and was built from an original concept of maintaining social distancing with cardboard cut-outs of himself as Principal, the Deputy Principal and Year Head. 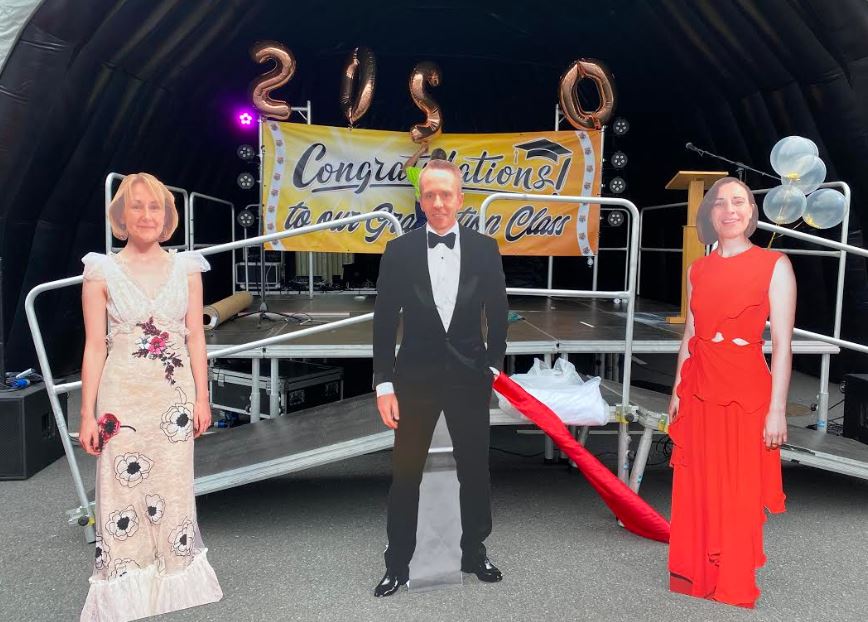 He explained: "The students were asked about the graduation and they did not want a Zoom graduation.

"They deserved a graduation that went the extra mile, was creative, unique and different like a mini concert but the main acts were the students and that is how I tackled it. 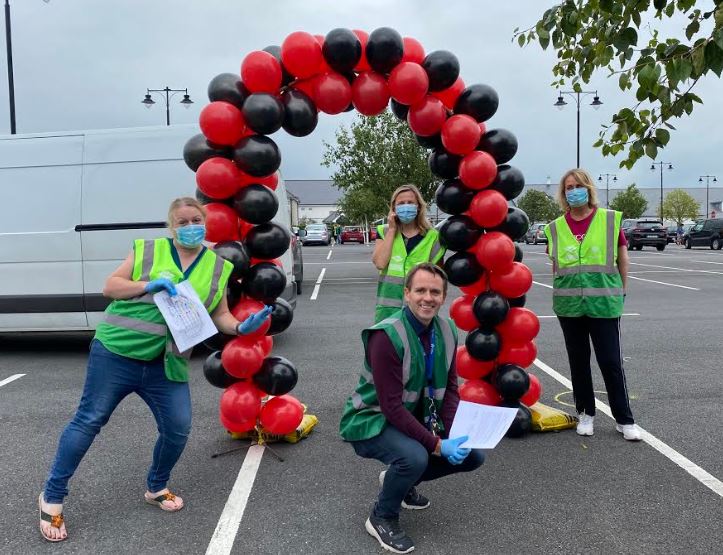 "I contacted the Chairperson who laughed but said he loved the idea and gave it 100% backing. I went from there to the Gardai (Gavin Dunphy), Cllr Suzanne Doyle (Mayor of Kildare), Pat Conlon and Kildare Village.

"It was truly a community effort and was a magical event. Definitely set the standard for any event during Covid-19.

"Education needs creative thinkers/leaders to go the extra mile and that was what we achieved. It’s a similar approach principals need to use in order to tackle the re-opening in September.

"Students/parents and the community will remember this for a long long time."

Brenda Donohue from RTE Radio One Countrywide was there to report on a very personal, moving and unique Graduation  where the students received an unforgettable experience.

"The event was better than any experience documented during the pandemic and set the standard for any school.

"It was like a mini electric picnic - and the atmosphere was electric!"

The key message to students on the night from the Principal was not to  underestimate kindness, to learn from good mentors and that you can judge a person by how he/she treats others and especially how men treat women.

Parents also praised the school and the teachers for such a novel event.

One parent said to Mr Hayes:

"I would like to congratulate you on doing such a fantastic job for all of the students, having a drive-in graduation was such a great idea. They experienced a very unique and unforgettable experience. As we all know it's so important to have closure of their school years, and graduation is an important rite of passage, and thanks to you, they not only got that rite, but they probably had the coolest graduation ever!"

"Also, I would like to thank you for all of the Zoom calls during lockdown, thanks to you, we were all kept as informed as it was possible to be under such extremely unusual and sometimes very stressful times. Thanks to your updates we could sort out fact from the fiction that all too often appears on social media.

"You have done an outstanding job for the students, and made sure that there has been a hugely positive ending to what seemed at one point to be the most difficult and disappointing end to their school years.

Another parent said: "The KTCS graduation event was very impressive.The attention to small details demonstrated that KTCS considered the event as seriously important and was motivated to make a success.

"Thanks to the teachers who stood for so long, smiling and friendly throughout -as if they were doing the only thing they wanted to do at that moment (it was a long time to stand and it was not warm). The attention to detail with the red carpet, balloons and recorded speeches (perfectly short and sweet)."

Another parent said: "The event made each and every student feel special, and given the stress they have had over the last few months I'm sure they all appreciate it greatly.

Well done to all involved it was a super super night what a great success! I'm sure this will be talked about for years to come."