Coonagh to remember 11 sailors lost in World War One 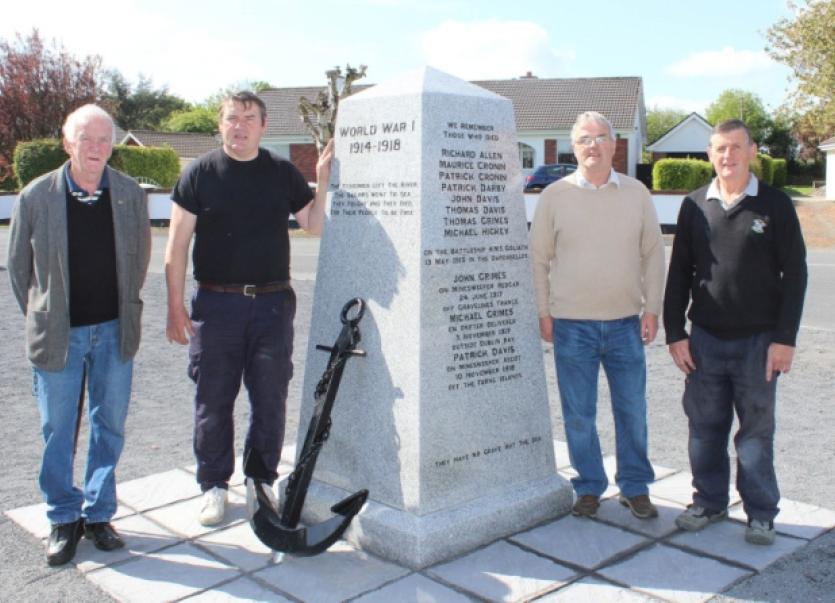 THE village of Coonagh will this weekend commemorate the 11 seamen who lost their lives serving with the Royal Navy during the First World War.

THE village of Coonagh will this weekend commemorate the 11 seamen who lost their lives serving with the Royal Navy during the First World War.

With a population of only around 200 at the time, the war casualties represented a huge tragedy for a small community with a long tradition of naval service.

And the unveiling of a memorial this Sunday coincides with the week of the 100th anniversary of the biggest single loss suffered by Coonagh during the conflict, the sinking of the battleship HMS Goliath at the Dardanelles during the Gallipoli campaign on May 13, 1915. Eight of the 570 casualties were from Coonagh.

Chairman Mike Cronin, who has led the work of the Coonagh War Memorial Committee for the past eight months, said he was delighted that, to mark the centenary, a newly commissioned monument of modern design would now be placed at a central location between Upper and Lower Coonagh.

“Until now”, he said, “our forebears have been commemorated on the Plymouth War Memorial in Devon. From now on, thanks to the generosity of relatives and friends, they will have a permanent memorial to their service and sacrifice here at home in their own place.”

The sinking of Goliath happened under the cover of darkness in the early hours of the morning, when she was hit by torpedo fire from a Turkish destroyer with a German crew. Three men from Coonagh survived the attack, Patrick Barrett, Patrick Hickey and Michael O’Connor. And another Coonagh man, Denis Hogan, had been transferred off the Goliath just a short while before.

Two others from Coonagh were lost in 1917. These were John Grimes on the minesweeper Redcar, off Gravelines, France, and his older brother Michael on the drifter Deliverer, just outside Dublin Bay.  Michael’s grandson, Liam Grimes of the War Memorial Committee, now lives in the same house and it was he who made the anchor which forms part of the new monument.

Patrick Davis of Coonagh lost his life when the minesweeper Ascot was involved in action with a submarine, near the Farne Islands off the English coast on November 10, 1918, the day before the war ended. His brother had gone down with Goliath in 1915. It was the last ship of the Royal Navy to be lost in the First World War.

Committee secretary, Gerard Enright, whose grandfather, Martin Enright of Coonagh, was on another ship in the vicinity of Goliath on that fateful night, said the official unveiling at the monument cross in Coonagh would take place this Sunday, May 17.

“There will be a special ceremony of remembrance at which the monument will be unveiled and a wreath will be laid by close relatives of the men who are named on the stone. With the participation of the Royal British Legion and the Irish Naval Association, we hope that it will be a fitting tribute”, Mr Enright said.

Participants in the ceremony will gather at the Coonagh Sports and Social Club from 2.30pm.  A parade will march from there at 2.45pm and the ceremony will take place at the monument at 3pm. As well as the residents of Coonagh, family members from Limerick and beyond are expected to attend on the day.