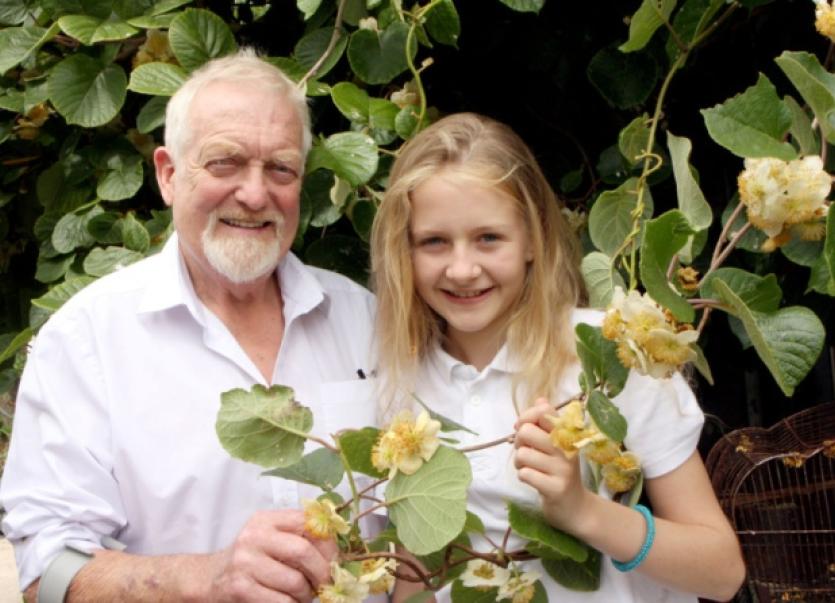 FOUNDER member of Bruff RFC Mike Condon never played against a kiwi in his rugby career but he is well on his way to growing them!

FOUNDER member of Bruff RFC Mike Condon never played against a kiwi in his rugby career but he is well on his way to growing them!

Mike is well known for being one of the few people in Ireland able to grow peaches but now he has turned his attention to kiwis, lemons and oranges as well.

His garden is more like one in Puerto Rico than Pallasgreen. Farmers have been busy making silage and saving hay during the glorious weather and Mike is hoping to harvest his crops in the future too.

“I have never heard of any other people in this county having kiwis, maybe in the south of England, but not in Ireland. I’ll chance anything,” jokes Mike.

He planted his first kiwi seeds seven years ago and only now is he in with a chance of getting some fruit.

“There is a huge blossom on them. It is so bountiful that I hope to get some fruit.

“It is all down to the weather. It is very well established now,” said Mike.

Many Irish gardeners have failed to even grow the plant not mind get fruit, but Mike has the magic touch.

“They are coming up nicely, there is a nice crop of little lemons on it,” said Mike, whose orange tree is also literally bearing fruit.

“I am not an expert gardener of any kind - a little bit of shelter, a little bit of care and things will come along for you. The kiwi plant, or the Chinese gooseberry to give it its proper definition, grow like hell here in Pallasgreen.

“I have two other ones I planted two years ago and they are climbing all over the place. Once they have a wall near them that they can climb - off they go,” said Mike.

Despite his burgeoning crops of other fruit Mike is best known for growing peaches. Again he is the only person he has heard of that has successfully got crops of peaches in Ireland.

Mike sells them locally to neighbours and friends to raise money for street kids in India and things are looking good for this year’s crop.

“I’ve had a few blossoms this year on the peach tree so you never know, there might be a few,” he smiles.

After previous stories appeared in the Limerick Leader he even got letters from green fingered ladies and gentleman who wanted to know his secrets.

But the most important thing of all is the sun and heat so let’s hope the forecasters have got it wrong and the great weather continues a bit longer.