‘My great escapade’ by Limerick boy Theo, aged 2 and a half 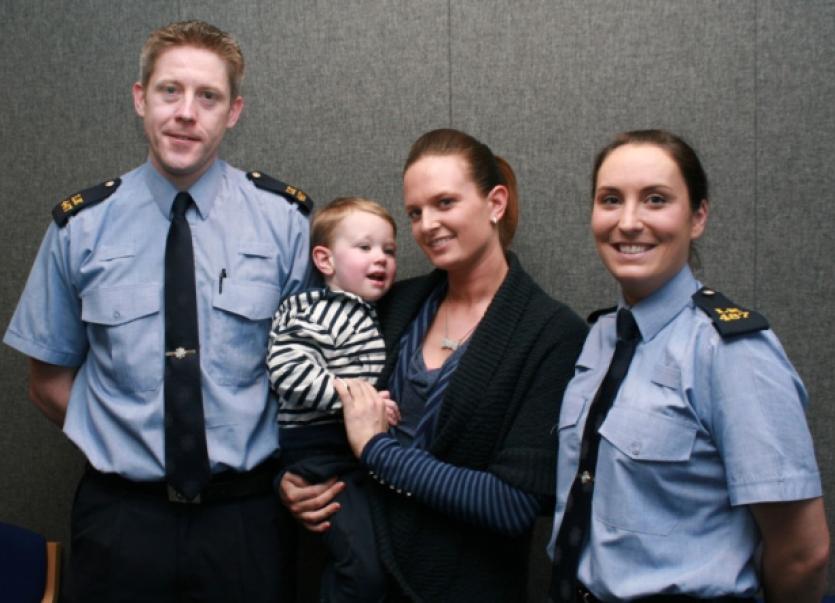 NOT everyone held in the safe keeping of Henry Street garda station receives a glass of milk, a yoghurt and gets to watch cartoons.

NOT everyone held in the safe keeping of Henry Street garda station receives a glass of milk, a yoghurt and gets to watch cartoons.

But little Theo Costelloe, aged two and a half, from Garryowen is quite the exception, a little boy who’ll never be forgotten by two investigating officers based at the station.

The story of Theo’s great escape from his home in Aspen Gardens unfolded in the early hours of Wednesday morning last, but the exact time he turned the latch on the door and made a break for adventure may never be known.

Wearing his blue onesie and carrying his baby sister’s pink blanket, Theo made his way about one mile from his home, walked across the busy Dublin Road, until he was spotted by UL student James Ryan, who along with a taxi driver called the gardai.

The Kilkenny native, who works part time in the Icon nightclub in the city, saw the toddler crossing the Dublin Road as he was walking home and said Theo “wasn’t fazed at all” by his adventures.

“He’s the nicest child. To be honest he was happy out,” James explained after meeting the family again, who have hailed him as a “hero”.

“He was a little nervous after I first met him, but then after a few seconds he was grand. When the gardaí pulled up he hid between my legs. He was happy out doing what he was doing, except then he started to shiver so I gave him my t-shirt. He had the blanket on around him too.”

While the story undoubtedly has a happy ending, it is also a case of every parent’s worst nightmare.

Mum Christine Costelloe, 26, was asleep in bed - and believed her three children were safe in their rooms - when gardai called to her house, woke her, and asked her if her son was missing.

At that stage Christine was unaware that Theo, who will be three this July, had some time earlier climbed out of his cot, closed his bedroom door behind him, scrambled down the stairs, let himself out the front door and walked about a mile away from his Garryowen home.

Christine, who is also the mother of Lauren, aged one and Jack, aged six, said she had fallen asleep after training on the couch at about 9.30am and went to bed at 11pm, after her mother had put Theo down for the night at around 8pm.

“I was unaware that anything was wrong. I heard guards downstairs calling for somebody, saying ‘Is there anybody there?’ So when I went down they asked me had I a young son, and I went back upstairs to check the rooms. My older son was in bed, but when I checked Theo’s room he wasn’t in his cot. I went back downstairs and the guards showed me a picture on their phone, saying ‘Is this him?’ They said ‘It’s okay, he’s safe’.”

At that stage, Christine said she was engulfed in “panic and shock”. “I was trying to think back, thinking how come I didn’t hear anything. It could have been a completely different outcome.

“I’m very grateful to the gardai and to James Ryan for staying with him until the gardai turned up. The ifs and buts of what might have happened have come into my head, but I can’t dwell on that. It could have happened to anyone. I’m just happy with the outcome.”

While Theo has managed to climb out of his cot unaided on several occasions, she said his escape in the early hours of the morning was completely unexpected and out of character for her son, who is normally very shy.

Christine, who works as a receptionist in a business college, said she believes he would have known the route well, as his brother Jack attends St Patrick’s school nearby. “It didn’t surprise me that that was where he ended up,” she added. “Usually they all sleep through all night and I don’t hear anything until the next morning.”

Gardai Orlaith Ryan, from Fermoy in Cork, and Shaun O’Hagan, from Ballinasloe in Galway, who received the call, said Theo was found in a small by-way leading off the Dublin Road onto the Rhebogue Road, by Cherrydale Court.

“Young Theo wasn’t stopping for anyone. James Ryan saw him and kept on following him until a taxi driver pulled up, and between them they contacted us and we arrived at the scene,” he said.

Gardai arrived at the scene at 2.20am, but have “no idea” what time he left the house. They then made a number of inquiries to ascertain his identity, but an open door in Garryowen ultimately led them to the right address. While the door had been closed shut and was locked from the outside, it wasn’t double-locked when Christine went to bed.

“Our instant reaction was to make sure he was okay, and we brought him back to the station, kept him warm and gave him milk and a yoghurt, and put cartoons on the TV. He was a pleasure really,” said Garda Ryan.

Describing the emotional reunion, she added: “When we brought him back to meet his mam, we were rounding the corner and he started shouting ‘Mammy, mammy!’He ran literally, from when we opened the car door, into his mother’s arms. It was lovely.”

“When we got the call and heard about the young boy wandering the streets we literally ran out the door. I’m not a mother myself but I can only imagine what it must feel like. My heart went out to Christine,” said Garda Ryan.

“He was quite a well behaved child. He was cool out,” added Garda O’Hagan.

He was reunited with his relieved mum at 4am, who said every possible precaution will be taken in future to ensure he does not leave the house without her.