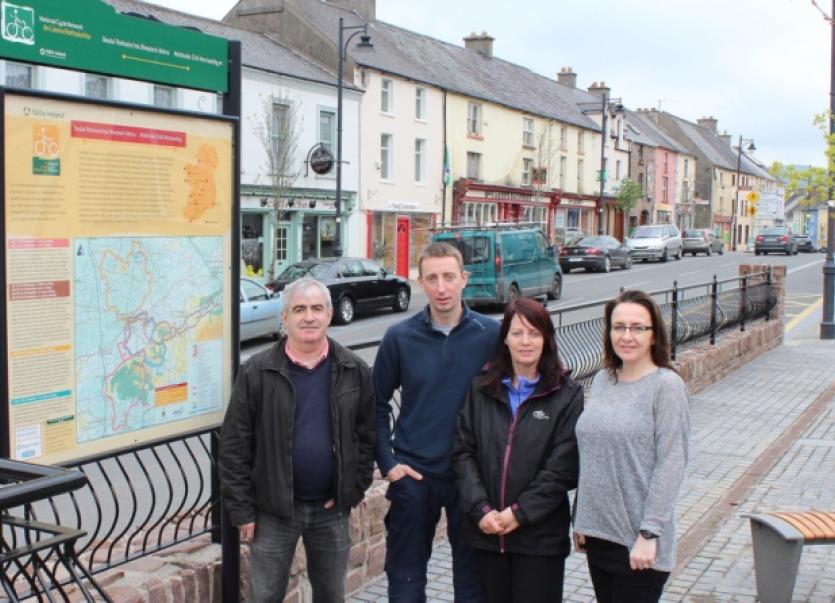 IF YOU were to evaluate the current status of Kilfinane based on the number of pubs which have shut up shop in recent years - there was 16 at one stage, now there are seven – you might say it is a village on its last legs.

IF YOU were to evaluate the current status of Kilfinane based on the number of pubs which have shut up shop in recent years - there was 16 at one stage, now there are seven – you might say it is a village on its last legs.

The opposite, in fact, is the case.

Although they didn’t completely dodge the right hook of the recession, the local community, by digging deep into their natural resources, managed to somewhat tip-toe around it and have come out fighting, with heads in the air.

“We have done a lot of community development in the area over the last number of years when, supposedly, there was no money in the economy,” comments Maura Quane, senior administrator with Ballyhoura Development.

It’s Tuesday morning, at 11am, and Maura and a group of locals have gathered in the Ballyhoura Centre to provide an overview of what is happening locally, for this paper’s Communities Fighting Back series.

“Obviously, this town has suffered, but the businesses that were there kept going and we have seen the introduction of new businesses as well. We have held our own,” Maura continues.

A new hair salon, Style and Grace, is only after opening its door across the road; there is also a new lawnmower repairs business out the road and the relatively new Ballyhoura Horse Trails located on John Joe O’Brien’s farm on the Ballylanders Road is galloping along nicely.

Kilfinane, of course, boasts a natural asset that no money can buy – a spectacular setting with the breath-taking backdrop of the Ballyhoura and Galtee mountain ranges. As a result, many of the local businesses are associated with tourism, forestry, hospitality and the off-shoots of those again.

Liam Sheehy arrives in the door from Ballyhoura Trailriders, a bike rental business located near Ardpatrick which has been opened almost six years. “We had a good weekend,” he smiles, “the fine weather helped. There were a lot of people around”.

Tom Leahy’s tractor and plant hire service will be opened two years in May. “It’s slowly coming on,” he says, with a cautious optimism. “It takes time but I’m happy enough with the way it is going.”

“I have been involved in a few projects in the past and the council, to be honest, just stifle growth. They are choking things with regulations,” he points out.

One development which is really taking shape in the village is the former Church of Ireland across the road. The old building is currently being restored thanks to funding received from Ballyhoura Development Ltd. The completion of the first stage of the development will enable the church to be used as a community resource, holding various events including drama, theatre, musicals, arts events and small meetings. “These events will allow the residents, visitors and particularly the young people of Kilfinane and the surrounding areas to learn more about, or be introduced to, the arts,” said Maura who is also on the Kilfinane Church of Ireland Conservation Committee. The building has been lying idle for years and it is anticipated that it will be opened in June or July.

Sport, of course, plays a huge part in the lives of the people of Kilfinane – which at last count had a population of 1,000.

While immigration has taken its toll on communities and can be particularly evident when clubs are trying to field teams, according to Maura - who was the secretary of the GAA club for the last three years - Kilfinane hasn’t been hit as much as other areas.

While it may not boast a big concert venue, Kilfinane still manages to pull in the crowds year-on-year with its Rocky Mayhem festival which has become a huge moneyspinner for the area. Last year, Damien Dempsey raised the roof of the marquee in McCarthy’s yard and this year it’s the turn of The Frank and Walters.

Meanwhile, Joe Young of Young Nurseries is keen to see more emphasis being put on nurturing the youth in the local community in terms of training and skills. “If we could train people locally, we would have local jobs for local people. If we could work in conjunction with some of the colleges, it would sustain rural communities so much better,” he said.

Brian Carey, who has been running his hairdressing salon for the past 24 years, agrees. “Years ago, you didn’t have to go to college to get a job, you got an apprenticeship or worked locally so that meant there was more people around to spend money in the town, whereas now, things are different. But we are still holding our own and looking for new ideas all the time.”