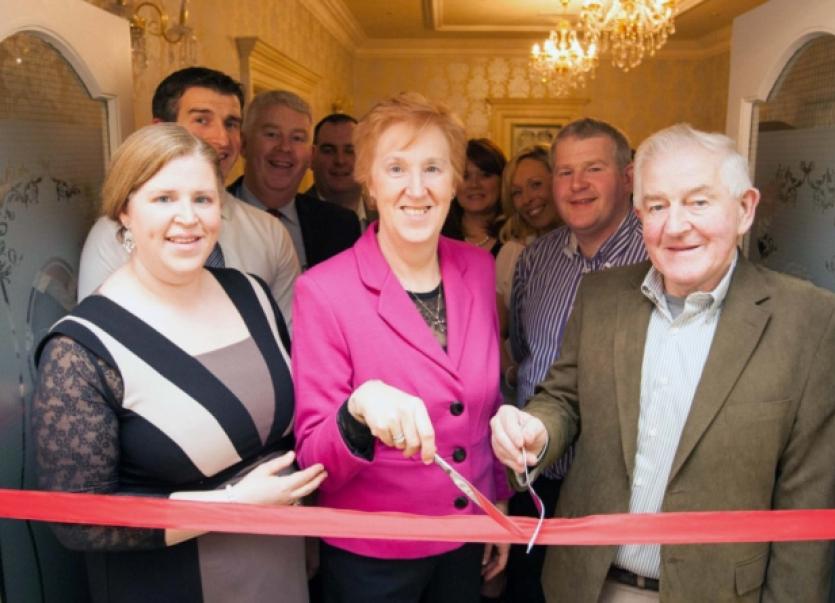 THE life of a true legend was celebrated as hotelier Dick Fitzgerald was laid to rest in one of the largest funerals seen in County Limerick in many years.

THE life of a true legend was celebrated as hotelier Dick Fitzgerald was laid to rest in one of the largest funerals seen in County Limerick in many years.

The late Mr Fitzgerald, who, with his wife Mary, established the Woodlands House Hotel in Adare, passed away last Tuesday, September 30, following a short illness.

Over the course of two days last Thursday and Friday thousands of people came to pay their respects to a much loved and highly respected figure in Limerick and further afield. For almost 12 hours on Thursday afternoon and into the early hours of Friday morning, mourners queued at the family home to pay their respects. The generosity of the Fitzgerald family, and the late Dick himself, was much in evidence throughout the day, with guests being provided with drinks and meals, even as they waited to enter the house.

The following morning, The Holy Trinity Abbey Church in Adare was packed to overflowing for the funeral service.

Mr Fitzgerald’s son, David, paid a moving tribute to his father, whom he described as “a legend”.

Thanking all those who had come to pay their respects to his father, he commented that Dick “had a great way of drawing a crowd for every event.

“We are absolutely so uplifted by the genuine care and love and good wishes everyone had for dad,” he said.

David went on to speak about his father’s great hospitality and his willingness to help whenever needed. “Dad had a word for everyone and he made everyone feel so warm and welcome. He had the most ordinary way of making you feel so happy inside and he treated everyone the same,” he told the packed congregation.

David Fitzgerald also spoke of his father’s love for sport, particularly Kerry football, as well as racing, hurling, soccer and rugby, noting that he was always delighted when Kerry supporters came to the hotel.

Born in 1944 in Laccabawn, Castleisland to David and Helen Fitzgerald, Dick was the second youngest of seven children. In 1967, he bought the farm in Knockanes, Adare and, as David noted, “the farm was well known for strawberries and Brussels Sprouts and dad was well known for supplying shops in Limerick. To this day, we have people that come to the hotel every week and tell us they bought strawberries from the front field,” he said.

Dick married Mary in 1973 and, in 1977, they opened a guesthouse in Adare. By 1983, this had grown to become the Woodlands House Hotel. Over the next 30 years, the hotel expanded with Dick, Mary and their family maintaining a very hands-on role in the business.

The Fitzgerald group later acquired the Vienna Woods Hotel in Cork and between the two hotels now employ more than 200 people.

In his eulogy, David Fitzgerald said his father had “a huge heart and natural hospitality”.

“Dad, thank you for being such a great husband, father, grandfather, brother, son-in-law, friend, mentor and example for everyone. You lived life to the full and you would have been so happy to receive all the people for your own funeral yesterday.

“We are heartbroken today but the memories and stories are of great comfort to help us mourn you, our legend.

“This has been a celebration of 70 years of joy and, as Mam put it, you were a villain and an angel. You have given us ten lifetimes of memories and laughs,” he said.

Many tributes have been paid to Mr Fitzgerald in the past week.

Fine Gael chairman and local TD Dan Neville recalled his “easy-going personality, a man who it was always a pleasure to meet”.

“I wish to acknowledge the late Mr Fitzgerald’s immense contribution to commercial life in Adare and his contribution in making Adare one of the best tourist destinations in Ireland. Dick’s passing is a great loss to the whole community of Adare,” he added.