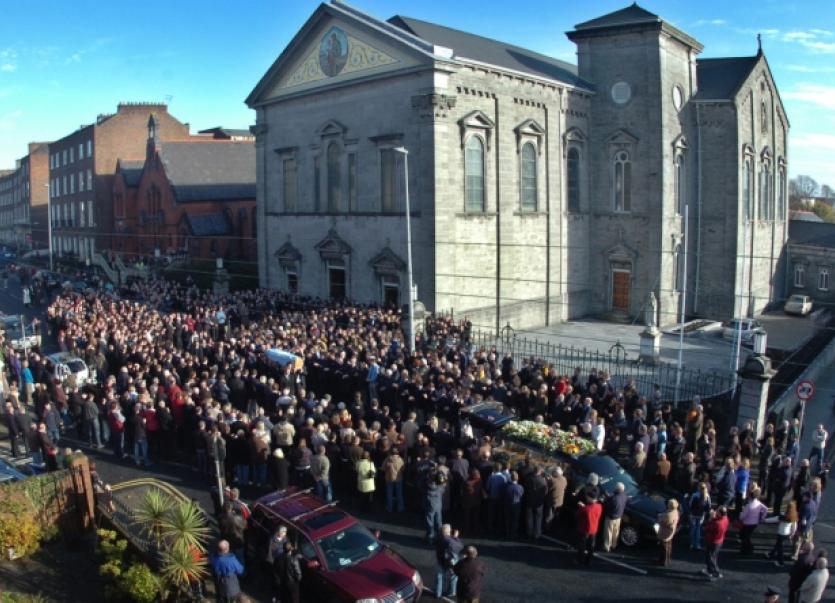 THE shock, horror and revulsion that greeted news of the slaying of Shane Geoghegan reverberated first around Limerick and – very quickly – the wider world.

THE shock, horror and revulsion that greeted news of the slaying of Shane Geoghegan reverberated first around Limerick and – very quickly – the wider world.

The gentle giant was the first innocent victim of a gangland turf war that gripped the city for over a decade.

Two thousand people turned out for Shane’s funeral on November 12, 2008 - many thousands more wore the grief openly as they learned further details about the Garryowen rugby player’s life and the circumstances of his tragic death.

The murder, later coupled with that of Roy Collins in 2009, a second innocent man slain by the criminal gang responsible for Shane’s death, galvanised politicians, who enacted the Criminal Justice Bill which introduced special measures to tackle gangland crime in June 2009 and gave gardai the tools they needed to pursue the high profile figures behind organised crime in Limerick.

The investigation to bring John Dundon to justice was, as Garda Commissioner Martin Callinan said this week, “painstaking and lengthy”. The reality was that, as was revealed in the trial in the Special Criminal Court, in the immediate aftermath of Shane’s shooting, gardai knew who had ordered the botched hit.

The court heard that Shane was shot due to Dundon’s carelessness, with prosecuting counsel Sean Guerin, BL, referring to the evidence given by April Collins that Dundon had described the intended target to the gunman Barry Doyle, saying: “The lack of precision in that description is what made it possible for someone else to be killed.”

The callousness with which Shane was executed and the needless manner in which he died was immediately apparent to gardai in November 2008.

The world’s media flocked to Limerick to report on the abhorrent incident, the case of the innocent man wrongly targeted by a vicious criminal organisation.

That he had been a fun loving, outgoing man with a massive circle of friends, a loving girlfriend and a keen rugby player to boot, added to the emotion surrounding his tragic death and the suffocating media interest, with the murder making headline news around the world.

Within days of the Limerick Leader putting a condolences page online, 15,000 people had ‘lit a candle’ for Shane.

As editor Alan English said at the time, there was “outrage in the city and beyond it and there has been an unprecedented reaction to this killing”.

The sense of outrage went hand in hand with the sense that the killing could have been avoided, averted, had circumstances not aligned to put Barry Doyle in Kilteragh on the night of November 9, 2008.

Family, friends, community, the entire city and wider region were left numb by the murder.

At Shane’s funeral, which was attended by Commandant Michael Treacy, aide de camp to then Taoiseach Brian Cowen and featured a message from then President Mary McAleese, chief celebrant Fr Jim Maher, who taught the 28 year old in Crescent College Comprehensive, spoke of how a fellow teacher had described Shane as a “gentle giant”.

“He was physically robust, but he was gentle also. That’s not to say that Shane was a saint,” he added to gentle peals of laughter in St Joseph’s Church.

There were smiles also as November Rain was played in full in the church during communion, the nine minute Guns N’ Roses classic filling the church with screaming guitars and a squealing Axel Rose.

The laughter stopped as Shane’s brother Anthony rose to speak.

“You can shed tears that he is gone, or you can smile because he has lived,” he said, voice wavering as he quoted the simple lines of a David Harkin poem, one that arrived in the post on the morning of the funeral. “You can close your eyes and pray that he’ll come back, or you can open your eyes and see all he had left. Your heart can be empty because you can’t see him, or you can be full of the love you shared,” he added.

As Anthony finished speaking, a spontaneous, thunderous roar of applause rang out around the church, an emotional outpouring for those that witnessed it.

A trust in Shane’s name was established nearly four years ago to work with children through community projects and try and bring about some good from the tragedy. Last year, on the fourth anniversary of Shane’s death, and after working with hundreds of children through the innovative Street Games project in Kilteragh, Moyross and Ballinacurra in conjunction with the Limerick City Sports’ Partnership, the trust was wound up.

Shane’s mother Mary said that his family were “extremely grateful to the people of Limerick for their unstinting support for the work of the Trust”.

William McGonagle, board chairman, said that the Trust was set up “to ensure a positive memory of Shane, because of the danger that he might be remembered only by the manner of his dying”.

He added that the family “believe the success of its work indicates it’s now time to wind up its affairs.”

Likewise, an innovative art installation established up by Shane’s aunt Margaret Walsh sought to commemorate Shane’s third anniversary, a “fitting way to keep Shane’s memory and to help all innocent victims of violence,” she said.

Over 20,000 people made small clay figurines in Shane’s name that his aunt, a ceramicist, assembled into a metaphorical pitch in his honour, and which were put on display in City Hall.

“Shane loved what Limerick stood for, he loved rugby, and he was part of that, and this is a tribute to him. His good humour, his democratic ethos with which he treated everybody - you couldn’t be unhappy around him and that is what we want this to signify,” Mrs Walsh said.

In 2008, just six short days after the funeral, Munster faced the All Blacks in Thomond Park to mark the stadium’s €40m redevelopment.

A heaving Thomond paused for a minute’s silence in memory of Shane, a poignant moment that moved many to tears.

It was a moment that few in attendance will forget, nor those glued to the television at home. The silence reflected everything good that Limerick is famous for as the spiritual home of rugby as well as what Limerick was infamous for at the time - organised crime.

As Labour TD Jan O’Sullivan reflected this week, Limerick “can no longer be given any kind of label that would suggest that we are a violent city.

“In fact, we are one of the safest cities in Ireland now.”

That infamy has hopefully now been shattered once and for all by events this week.