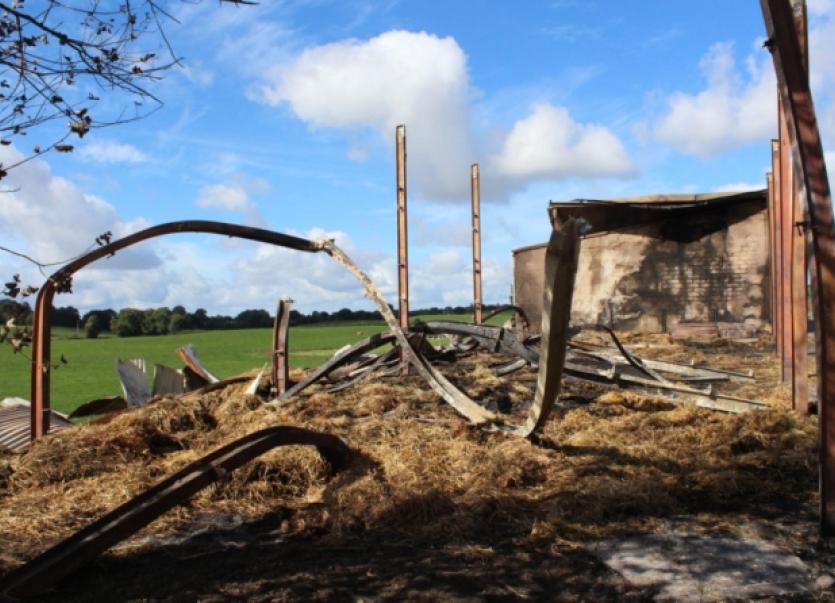 ONLY some charred and twisted pieces of metal and a mess of sopping straw remain after fire destroyed a farmyard shed at the Pallaskenry Agricultural College this Wednesday.

ONLY some charred and twisted pieces of metal and a mess of sopping straw remain after fire destroyed a farmyard shed at the Pallaskenry Agricultural College this Wednesday.

And as staff at the college and the farm took stock of the damage, Gardai began an investigation into how the fire started.

The fire broke out in a shed in the dairy yard about 4am this Wednesday morning, the newly appointed principal of the college, Derek O’Donoghue told the Limerick Leader.

“It was a shed storing straw bales. It was in the dairy yard but not adjoining the dairy,” MR O’Donoghue continued. A neighbouring farmer noticed the fire and raised the alarm.

Farm staff who live on the farm sprayed water in an attempt to dampen down the fire and prevent it spreading. Four units of the fire service attended the blaze and stayed on for almost six hours in a bid to ensure that the fire was totally extinguished and there was no risk of it re-igniting.

The yard remained cordoned off as Gardai and forensics carried out their inspection.

As yet, no explanation has been put forward for the fire, although spontaneous combustion cannot be ruled out. “It is extremely dry at the moment and we have had high temperatures,” Mr O’Donoghue said.

“But nothing can be ruled in or ruled out,” he cautioned.

A number of years ago, a fire destroyed a different shed in another part of the farm and that was found to have been started maliciously.

Mr O’Donoghue was unable to put a value on the damage caused by this Wednesday’s fire.

The straw in the shed would have been used for winter bedding, he said, but had been completely destroyed. The shed itself was burnt to the ground. The main thing is no person was hurt or burnt,” he stressed. “No livestock was hurt and no machinery damaged.