Then & Now: Dromoland Castle - a stately home with a rich history 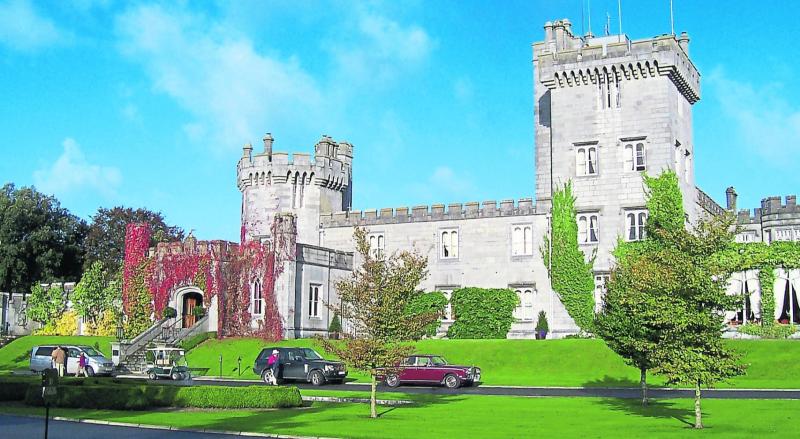 DROMOLAND CASTLE in nearby Clare is situated on a 450-acre estate offering a spectacular view of Lough Dromoland, a haven for fishermen. The castle is one of the few to remain in the hands of the original owners, the O'Briens of Thomond, North Munster. The O'Brien clan can trace their ancestry back to Brian Boru who managed to break the hold of the powerful O'Neills of Ulster and declared himself high king of Ireland. Brian went on to defeat the Vikings at one of the most famous battles in Ireland, The Battle of Clontarf in 1014 and is credited with taking back control from the Viking invaders. The current Gothic Revival structure was completed in 1835, The architects were James and George Richard Pain.
From the early 11th century, a branch of the O'Briens based themselves in what would become one of their permanent residences, Dromoland Castle. It was a defensive stronghold, similar in structure to Bunratty Castle nearby that was once home to the O'Brien chieftains. By the 1500s, the Irish chieftains and O'Briens included were forced to submit to Henry VIII, thereby surrendering themselves, their lands and their people to English authority. The Irish chieftains returned home to Ireland with English titles, courtesy of the Crown. The building of the original castle is estimated at the 15th/16th century.
The history of Dromoland Castle is really the history of the O'Brien family as they are both entwined with notable characters, names and reputations associated in the story. Maire Ruadh, daughter of Torlach Rua Mac Mahon and Mary O'Brien, daughter of the third Earl of Thomond was one colourful personality associated with the castle. Her second marriage to Conor O'Brien around 1639 resulted in eight children. Conor was killed in 1651 fighting the Cromwellian army. The punishment for uprising was forfeit of her husband's property. Maire Ruadh married Cornet John Cooper a Cromwellian officer, in so doing enabling her to keep possession of the family estate.
Her supposed involvement with Conor O'Brien's raiding parties in the 1640s led to charges. What is clear is that Maire received a royal pardon for all the murders she committed in 1664. Her final years were spent in Dromoland Castle. Her son Donough moved the family seat from Leamaneh Castle also in Clare to Dromoland.
The second baron Edward O'Brien was described as a racehorse owner and trainer fared badly with money. He managed to spend most of his grandfather’s inheritance as he was a terrible gambler. He once gambled the estate on a horse called Sean Buis who luckily won the race and saved the estate. The horse is buried in the grounds near the old entrance to the castle. Edward built the Turret on the hill opposite the entrance to the estate to allow him a better view of his horses racing around at his favourite sport.
In 1848 William Smith O'Brien was an active member of the Young Ireland rebellion movement and was part of an attack on the RIC Barracks near Ballingarry in County Tipperary. While no one was hurt in the incident, the Government offered a reward of £500 for his capture. He was arrested at Thurles Railway Station and held at Kilmainham Jail. He was tried by a special commission of three judges, Lord Chief Justice Blackbourne, Lord Chief Justice Doherty and Mister Justice Moore at Clonmel. The trial lasted for nine days, September 19 to 28 1848 and William was found guilty of high treason and sentenced to be hanged, drawn and quartered.
Following petitions for clemency were heard, his sentence was commuted by Queen Victoria and the rebels were sent to Van Diemen's Land (Tasmania), where he spent 6 years in exile.
At the beginning of 1854 the British Government decided to pardon him as the British would need the support of the Irish if war broke out with Russia.
On February 22, 1854, the pardon was granted and when news reached Ireland, two bonfires were lit at the gate of Dromoland Castle. News of the pardon did not reach William in Hobart until the middle of May.
On May 9, 1856, he was granted a full pardon and finally returned to Ireland in July.

In September ten thousand people gathered at his home at Cahermoyle Ardagh to welcome him home.
He settled down but a thorn in his side was his son Edward who had no pity for his radical activities. The death of his wife Lucy in June 1861 led to worse relations with Edward. An agreement was reached, and Edward agreed to pay him £2,000 per year for life if he left Cahermoyle.
William's health failed and he died on June 18, 1864, while staying with his sister in Anglesea , Wales, and his body was brought back to Dublin from Bangor.
On June 24, he was buried at Rathronan churchyard near Ardagh. A committee was formed to collect money to erect a monument and statue of him was unveiled in O'Connell Street Dublin on December 26, 1870.
During Ireland's War of Independence in the 1920s, the castle faced a serious threat of attack.
The IRA leaders in Dublin had the castle selected for demolition, but the local brigade in Clare argued otherwise on behalf of the O'Brien family. They made a case for the family who were involved in relief work during the famine years and were fair in their dealings with their tenant farmers. They also argued that William Smith O'Brien a member of Parliament, initially opposed Daniel O'Connell, the Liberator.
Dromoland Castle continued to be the home of the O'Brien's until 1962, when it was sold to Bernard P. Mc Donough, an Irish American Industrialist from West Virginia.
In 1987 the castle and estate passed into the hands of a consortium of mostly Irish American investors. The last of the O'Briens may have left the castle, but not the estate. The present-day head of the clan can be found in Thomond House, a short five-minute meander from his ancestral home, Dromoland Castle.
At present, Dromoland Castle operates as a luxury 5-star hotel, complete with a world-class golf course. The lavish interiors, fine food and superb wines complement the luxury accommodations of the castle's 97 guest rooms and suites. An intimate full-service spa and traditional outdoor recreational opportunities including falconry, fishing and tennis, ensure a unique guest experience. It is a very popular venue for weddings and the rich and famous to visit. In the Brian Boru Suite, they can in luxurious surroundings, connect with nine hundred years of O'Brien history.