Then & Now: The magical powers of the hawthorn 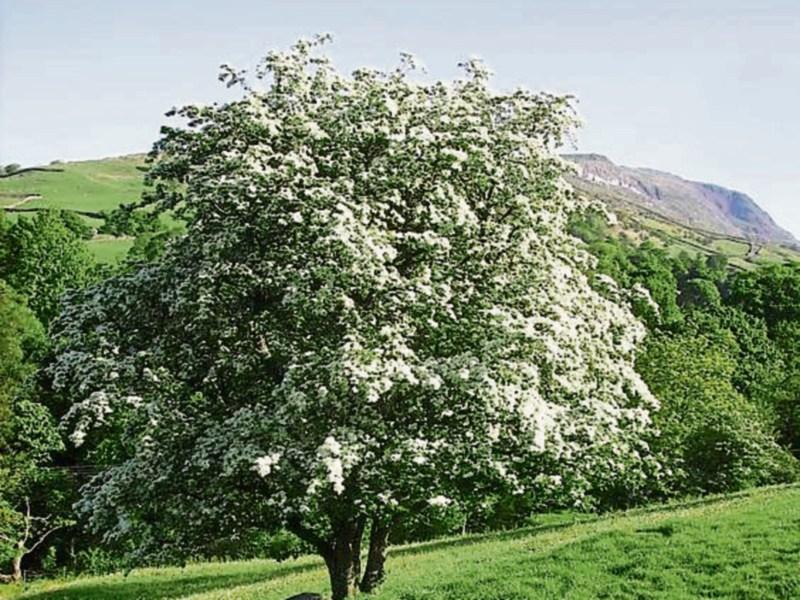 THE HAWTHORN is in full flower around the countryside at present, so it is safe to put away the winter clothes and introduce the summer wardrobe.

‘Never cast a clout till May is out’ is an old saying associated with the Hawthorn bush. It meant not to change to your clothes summer clothes until the Hawthorn was in full bloom, which could be earlier or later than May 31. The once very popular May altars to Our Lady would never include the hawthorn blossom, as it was regarded as bad luck to bring it into the dwelling house.

The Whitethorn or May bush, with its milk white blossoms and thorns is a symbol of May time, and of magical powers, and the little people or fairies. The hawthorn especially the lone bush has always been regarded with a mixture of fear and respect. In Irish the hawthorn is the sceach (or scheach geal) very common in place names all over Ireland.

A lone thorn bush in a field nourished by the ashes from the hearth was never cut or touched as it was the remnants of the life that went on around the hearth.

Trees were worshipped in ancient Ireland the oak ash and hazel in particular, but also the whitethorn which is usually much smaller than those mentioned. In many ways the respect and fear given to the hawthorn goes back to a time, when people lived closer to the land and were more in tune with nature.

Some of the hawthorn trees in Ireland are up to two hundred years old. They are very hardy trees and can grow in poor soil and can resist the power of wind and harsh weather. In autumn its red berries, haws, provide much needed food for the birds. While the wood of the whitethorn was seldom used in this country it is used as firewood in other countries. In Ireland it was considered unlucky to interfere with it and to bring any piece of it into the house was strongly frowned on.

Hawthorn blossoms and leaves are edible and can be used to make a tea, to cure anxiety and poor circulation. The blossom was also used as a fertility symbol in many countries. The Greeks and Romans saw the hawthorn as symbolic of hope and marriage. The Roman goddess Cardea, mistress of Janus keeper of doors, had a bough of hawthorn as her symbol, and the month of January is called after Janus.

Popular folklore has it that the crown of thorns which Christ wore was of hawthorn. According to Cornish legend Joseph of Armiathea, who buried the body of Jesus, came to Britain after the crucifixion, and where he stuck his staff, a hawthorn grew, and it is now known as the Glastonbury Thorn. The success of the hawthorn was taken to symbolise the spreading of Christianity and it was there he built his first church.

While it is an important part of many hedgerows, it is the solitary hawthorn which is more revered and even if its position is inconvenient, it generally is left alone. The warnings have been passed down through the generations. Otherworld creatures particularly the sidhe (fairy folk), are believed to live in, or nearby, the tree and it has often been recorded how passerby would hear music or see a light coming from the vicinity of the hawthorn.

The magical powers of the hawthorn are said to be greatest when found growing beside an oak or ash tree. Hawthorns are very often found growing beside holy wells, and in times past pieces of cloth, medals, and rosary beads, could be seen hanging from the branches. They are often referred to as rag trees and tying strips of fabric to a tree was a way of seeking a cure.

A famous hawthorn tree is located at Latoon in Co. Clare. In 1999 the motorway from Galway to Limerick was delayed and eventually rerouted to avoid damaging the fairy tree there. It is not clear whether the local authorities did so out of respect for the solitary tree, or the international media attention that was drawn towards it by the folklorist, Eddie Lenihan. A native of Brosna Co. Kerry he is the author of several books on folklore, including The Fairy stories of Hidden Ireland.

Eddie claims that the tree was a meeting point for the fairies of Munster when they did battle with the fairies of Connacht. He argues the otherworld forces would take revenge, and the road would be a cause of accidents if the tree was removed. Hawthorns are still respected by the majority of people, in the know who still a little fear of the consequence have if they interfere with them.

The hawthorn is also the basis of agricultural superstitions; that hanging the afterbirth of a premature calf on a hawthorn would help it survive. It was also said that sprig of hawthorn hung in the cow byre, would help cows produce more and creamier milk.

An old custom was that the first milk of a newly calved cow was taken and poured under a hawthorn as a tribute. The hawthorn was also known for its powers of fertility. An English tale tells of how , when a certain thorn bush was cut down, no chicken would lay eggs, no cow would calf or woman have babies. The situation was only rectified when a new bush was planted.

The hawthorn bush was ideal for hedges dividing fields in times past, and a great source of food and shelter for wildlife, before farming practices changed. The ditches were levelled to create larger fields and replaced by wire and poles. This led to a scarcity of habitat for wildlife, which has suffered as a result. T

he practice of yearly cutting of roadside hedges has added to the problem leaving them scalped and bare during the winter months, and of no use to our bird population, who move elsewhere. Our ringforts are also being destroyed but that is a story for another time.

As time passes these old traditions are being forgotten and the younger generation have little time for such matters. At present many people are reluctant to talk about fairy trees, partially for fear of being ridiculed by strangers who do not understand, or who have been told that belief in such things is superstitious nonsense. This may be so, but I would not like to interfere with a lone hawthorn bush.