Louise Loves: Good for the Body and Soul 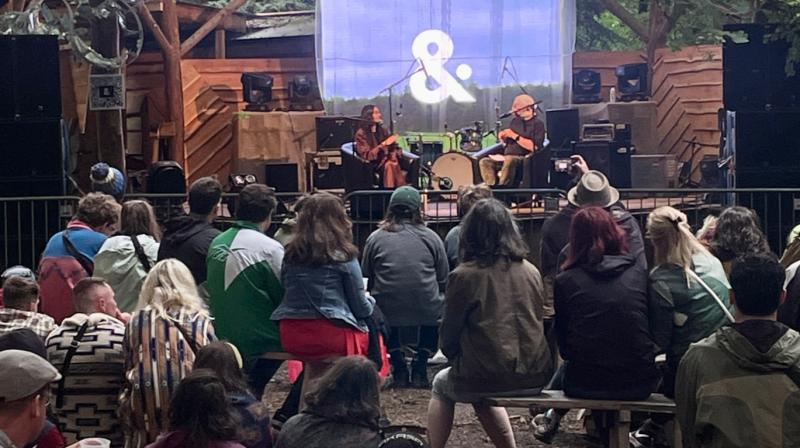 A FESTIVAL lovers paradise! Body and Soul returned to the beautiful Ballinlough Castle, Co Westmeath last weekend. It has been two years since the festival invited revelers to enjoy an intimate weekend of music, art and wellness, and it did not disappoint!
I arrived on Saturday evening, a little late for festivities but just in time to catch Limerick’s Strange Boy rocking it out on the Hennessy hip hop stage.
Fusing hip hop with traditional Irish music sounds like a recipe for disaster and in lesser hands this would probably be the case. But as unlikely as it sounds, Strange Boy has done just that, combining these disparate genres in a dark, yet thrilling manner. This is far from a gimmick, the earthy, ramshackle nature of the Trad band is the perfect foil to Strange Boy's autobiographical tales of suicide, depression, and anxiety, with lyrics that startle like a handful of grave soil to the face.
Limerick talent shone at the weekend. Blindboy recorded his podcast live at the festival to an impressive crowd at the woodland stage. The Blindboy Podcast rakes in over 1 million global listeners and is known for delivering ‘hot takes’ and comedic social commentary. Blindboy chatted with fellow Limerick creative singer songwriter Sinéad O’Brien.
Sinead then went on to perform her own set, also on the woodland stage - another festival highlight!
Relentless, surreal, incendiary, Sinead operates inside her own atmosphere as she constantly forms her response to the contemporary world she moves through. The multifaceted Irish poet, songwriter and performer is ascending into new territory with her debut LP, Time Bend and Break the Bower, released via Chess Club Records on June 10!
Other festival highlights include Beflast rappers, and gaeilgóirí Kneecap - Mo Chara, Móglaí Bap, and DJ Próvaí! Merging Irish with English, satire with socially conscious lyrics, and reality with absurdity, theirs is a voice which comes screaming from the too-often deprived areas of the North of Ireland, speaking in a language which is too-often ignored, and it makes for suitably electrifying stuff!
Finally, Clare man Daithí, one of Irelands best electronic music producers, his obsession with the west coast and the culture of Ireland is stunning. His live show was an improvised performance, creating on the spot dance music using synths, drum machines and live fiddle!

RAP Against Homelessness at Dolans
Rap Against Homelessness in aid of Focus Ireland will take place on June 24 at 7pm in Dolan’s Warehouse in Limerick. The night is curated by up-and-coming rap disruptor Strange Boy and will feature some of the best talent Limerick has to offer: Hazey Haze, SmallChurch, Enda Gallery, Jayne, Willzee And Deviant (Resident DJ). It promises to be one of the concerts of the year.
It is certainly timely. The latest homeless figures from the Department of Housing (March 2022) show there are currently 269 adults in emergency accommodation in Limerick and 51 families who are homeless in the mid-west. That figure shamefully includes 102 children.

‘It's a preventable situation, especially in Limerick but negligence by the government has allowed it to endure for far too long,’ said Strange Boy. ‘In this day and age, it should be a basic human right to have a roof over your head, something that hasn’t been provided for the most vulnerable in this city.’
“Dolans are delighted to be involved in rock against Homelessness” “Strange boy is no stranger to the Warehouse and is guaranteed to be an amazing night showcasing some incredible acts for a great cause,” said Neil Dolan
Rap Against Homelessness in aid of Focus at Dolan’s Warehouse on June 24th. Doors 7pm, show 8pm. Tickets are €15, available on the door and from Dolans.ie

TO DO
Street Food Done Good at Wickham Way
A snack van worth the hype! Serving up a rotation of the World's best street eats.
June is Taiwan month, enjoy Asian delights this Thursday- Sunday at the Wickham Way Market.

TO LISTEN
MONCRIEFF- RUIN
Hot on the heels of his smash single “Warm” – an instant hit that went top 10 in Irish Radio, “‘Ruin’ is about learning to open yourself back up to people after going through loss,” Following his recent Irish nationwide tour, Moncrieff is set to take to stages across the country this summer including Indiependence Festival and is appearing as a special guest for Stereophonics at Fairview Park.

TO SEE
The annual Thomond Swim Sunday, June 25
The swim starts from the slipway at St Michael’s Rowing Club and proceeds up the River Shannon turning just below Thomond Bridge. Competitors then swim down river past King John’s Castle, the Civic offices, Shannon Rowing Club before finishing back at St Michael’ s Rowing Club.