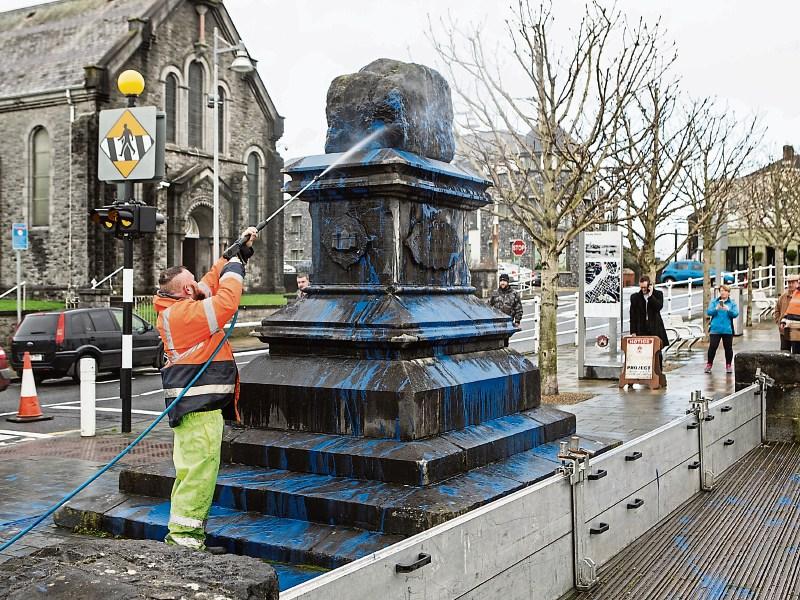 Under Siege: The Treaty Stone was defaced - but what of neglect elsewhere?

THE reaction to the recent act of juvenile vandalism targeting Limerick's historic Treaty Stone was interesting.

As was widely reported, one of our city’s most iconic monuments was daubed with paint in a mystery incident.

As the sun rose the next day, the condemnations started. Thugs, ignoramuses, vandals, criminals and urchins – just some of the words used to describe the perpetrators.

Almost immediately the wonderful volunteers from Limerick Civic Trust were on the scene. Luckily it had been a damp evening. Luckily the paint was water-based.

Social media commentary kicked into action. The Limerick pride we have become so well known for came to the fore. Our Mayor led the way with an official condemnation of the defacement. It wasn’t long until national media portals picked up the story.

In fact, the reaction was such that one could have been forgiven for thinking the Treaty Stone had been stolen from us. For a period, the Treaty Stone trended nationally; how could such a beloved piece of our city’s fabric be treated in such a way?

As social media went crazy I sat outside a cafe on O’Connell Street gazing up towards the Crescent.

As news coverage of the previous evening’s vandalism went viral, I couldn’t help but notice pigeons flying from the broken windows of our historic buildings.

As our Mayor released his statement of condemnation I couldn’t help but notice Penny’s clock which has been telling the wrong time for weeks.

In fact, I couldn’t help but think about the buildings that once stood on the site of what is now both Debenhams and Penny’s.

I remembered with fondness the grand façade of Cruises Royal Hotel and pondered what currently sits in its place.

I couldn’t help but think of the many former mills or meat factories, now abandoned, that sit forlornly waiting for that moment of inspiration to help bring them back to life.

I thought of our sadly forgotten lanes, once thriving hubs of activity but now the site of dereliction, discarded needles and lost dreams.

I thought of Kings Island and Nicholas Street and how they once looked and functioned.

I thought about the old Savoy Theatre and remembered the many stories I’ve heard told with fondness.

The glory days of Tops of the Town. The famous organ rising from the depths. The relationships formed in the smoke-filled auditorium.

What happened to the Treaty Stone was wrong. There can be no doubt it should be considered vandalism. It was stupid and immature but thankfully it was momentary and fixable.

Our civic pride was displayed once again in abundance. Volunteers got out to clean the site within the hour.

Conversations once again took place around the significance of the stone as part of our city’s history.

As a city we became once again momentarily energised to come together in a display of solidarity, condemning those who damage our city and telling the world of the love we have for our city and its history.

Yet those forgotten parts of our city I couldn’t help but think of made we wonder. Do we truly value our history and heritage or do we wait until it is ruined to pay it lip service?

Could it be that we take for granted all that is great about Limerick until, over time, all the best bits are taken from us?

Could it be that we take great pleasure gazing at old photos, reminiscing on our city’s glorious past without actually contemplating where things went wrong?

We find ourselves now in a time of great hope for our city’s economic and spatial future. Big decisions are being made as we speak. It is our duty to engage and ask ourselves about how we want our city to be shaped.

What happened to the Treaty Stone was a momentary and fixable act of vandalism. However, it could be argued that far worse, more official acts of vandalism have been allowed to be perpetrated against our city down through the years.

As we plan for the new Limerick of tomorrow we must remember that the old bits are often the best.

The forgotten back streets, the empty mills, the basements, the coach houses, the mews and the docks all deserve to be treated with the reverence we showed to the Treaty Stone last week.

Now is the time to ask how we all can play our part to make Limerick the urban centre is deserves to be.