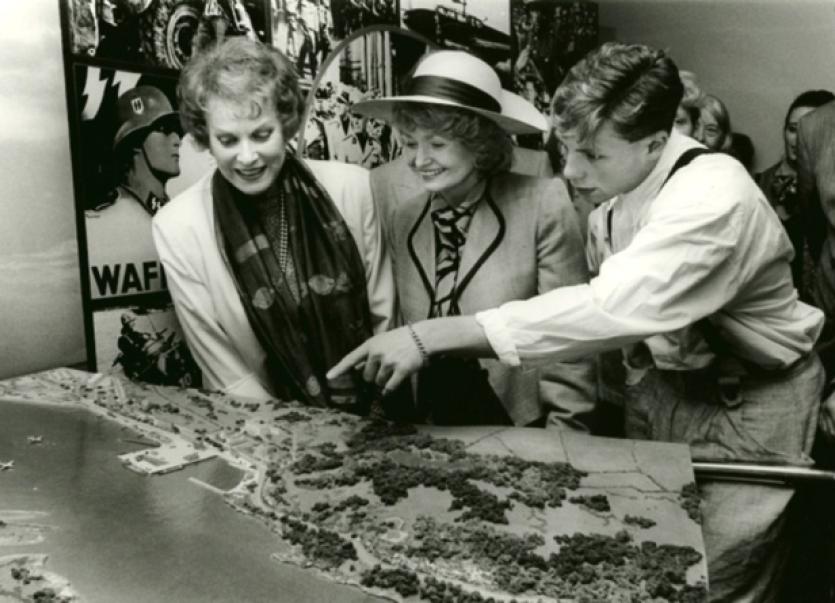 MAUREEN O’Hara’s long association with Limerick, and in particular with Foynes, came to a quiet and dignified end last Saturday when Ireland’s favourite Hollywood star died in her home at Boise, Idaho.

MAUREEN O’Hara’s long association with Limerick, and in particular with Foynes, came to a quiet and dignified end last Saturday when Ireland’s favourite Hollywood star died in her home at Boise, Idaho.

She was 95 and had been cared for in her last years by her grandson, Conor Fitzsimons.

But with her death, Foynes has lost one of its best advocates and most passionate ambassadors. And this was acknowledged by Mayor of Limerick City and County, Cllr Liam Galvin who paid tribute to Ms O’Hara for her support and patronage of the Foynes Flying Boat and Maritime Museum.

Since her death, tributes, led by President Michael D Higgins, have come thick and fast for the Dublin-born actress who gained stardom for her roles in The Quiet Man and Miracle on 34th Street especially. “I have often said that The Quiet Man is my personal favourite of all the pictures I have made,” Maureen stated. “It is the one I am most proud of, and I tend to be very protective of it. I loved Mary Kate Danaher. I loved the hell and fire in her.”

But in Foynes, she is remembered as a friend, as Maureen. And hundreds of photographs and thousands of autographs that have been treasured down through the years are evidence of that.

“She was always very accessible,” Margaret O’Shaughnessy, director of the Foynes Flying Boat and Maritime Museum said this week. “I have seen her signing autographs for hours.”

And whenever Maureen saw a camera pointed, the professional in her came out and she glowed. Even in the most amateur of photographs, her star quality shone out.

Foynes was always close to Maureen’s heart, Margaret said, because of its connection with her husband, Charlie Blair.

And she recalled that Maureen was one of the first to encourage her in 1986 when she was trying to get the flying boat museum from idea to reality. “I rang her in her home in Glengariff and I told her what I was thinking and she said: Don’t mind thinking about it. Do it. You must do it”,” Margaret recalled.

Three years later, Maureen O’Hara officially opened the museum in Foynes, which was then housed in just four rooms, and rarely missed an opportunity afterwards to promote the museum. “From a PR perspective, she was able to get it that international profile and that was hugely important in the beginning,” Margaret said.

When the Irish Coffee Festival was established in 1992, Maureen was a regular visitor. And even when Maureen couldn’t be there in person, she made a video link presentation. “I remember one year, Seamus Hennessy was MC and he sang The Lake Isle of Innisfree from The Quiet Man to her over the link,” Margaret recalled.

Maureen’s visits often coincided with her birthday, August 17 and her 80th birthday was celebrated in the Dunraven Arms Hotel in 2000. She also insisted that the premiere of Only the Lonely, the film for which she came out of retirement, would take place in Limerick, in the old Savoy Cinema.

Margaret described Maureen O’Hara as a very strong-willed woman. “She was so proud to be Irish. She never let that go through all the years. She never wanted a fuss. She was always down to earth.”

She also recalled that Maureen, following Charlie Blair’s death in 1978, became the first woman president or chief executive of an aviation company, Antilles Air Boats and edited the Virgin Islands magazine. “She gave it up because she said she was tired of dealing with men and bad language,” Margaret recalled.

“We had nearly 30 years of friendship. That is a long time,” she said, revealing that she spoke to Maureen every three or four weeks, the last time in early October.

Maureen’s wish was to be buried with her late husband Brigadier Gen Blair in Arlington’s military cemetery and Margaret O’Shaughness intends to attend it.

Seamus Hennessy, who was a great fan of Maureen’s and who visited her in her New York home, also hopes to attend the funeral. “She was a lovely lovely lady,” he said. “We will miss her and the very special way she had. She was a star to her fingertips.”

An exhibition of Maureen O’Hara photographs and memorabilia is planned for the Foynes Flying Boat and Maritime Museum in the New Year. “It will be our tribute to Maureen,” Margaret O’Shaughnessy said.