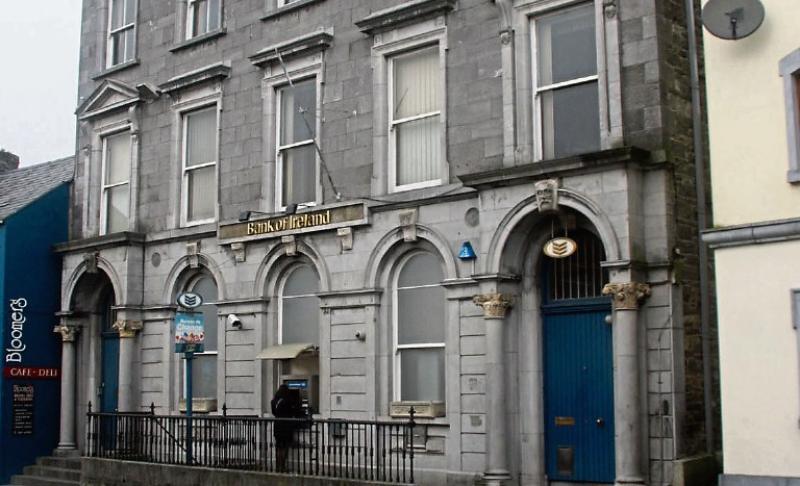 THE closure of seven Bank of Ireland branches in Limerick city and county this Friday will pose a security risk for small businesses who need and use night-time safes, Fianna Fáil’s Cllr Kevin Sheahan has warned. And he slammed the closures as a shameful act.

Askeaton, where the councillor is based, is one of the seven branches in Limerick to close its doors for the  last time this Friday.

The closures arise from a decision announced last March to reduce the number of branches nationally by 88. “This is the first significant change to our physical footprint in almost a decade,” a spokeswoman for the bank said.

Customers, she added, do not have to transfer their accounts to a different branch and the Bank has gone into partnership with An Post to provide banking services to Bank of Ireland customers at the country's 920 post offices.

But, declared Cllr Sheahan: “There is no justification whatsoever for the bank to abandon Askeaton."

The town has two major industries, Aughinish and Wyeth, he pointed out, as well as Southern Chemicals and Kingspan Aerobord, and a large farming and working community.

“It is a shameful act and comes so soon after the people of this country bailed out Bank of Ireland,” he said. “There will now be no bank from Limerick to Tarbert.”

The decision by Bank of Ireland was also met with deep disappointment in Rathkeale, where the bank occupies a prime position on the Main Street.

“We are disappointed. There was no negotiation. It was something that was decided without any consultation,” said Pat Neville, chairman of Rathkeale Community Council.

The move comes at the same time as AIB in the town has announced it will not be continuing to offer cash services over the counter or at the cash and cheque lodgement machines.

This is seen locally as a blow to businesses as well as individuals, pushing people out of town as they will now have to travel to Newcastle West for any cash service.

“We are trying to negotiate with AIB,”  Mr Neville said.

“Rural areas are devastated to be losing another vital amenity,” said Mark Nagle, chairman of Bruff Community Council. Bruff, he pointed out, had lost amenities over the years but people had pulled together and worked hard  “to turn negatives into positives”, repurposing buildings such as the courthouse and school.

“This is another blow. It is a tough one to take especially as the announcement was made in the middle of a pandemic,” Mr Nagle said. He praised the post office and credit union network for  picking up the slack left by the bank. But the hope is that the building could be repurposed as a remote working hub.

“We are very sorry to see them leave,” said  Maurice O’Connell, chairman of Abbeyfeale Community Council but  he thanked and paid tribute to all staff members of Bank of Ireland and its predecessor, the National Bank, who had served the people of the area for the last 100 years.

“I am very sorry to see a financial institution of that calibre closing,” he added.  His hope was that the bank building in the town square would not be left empty but would be sold and developed.

WATCH: Drone touches down in Limerick as package is 'delivered' from Shannon