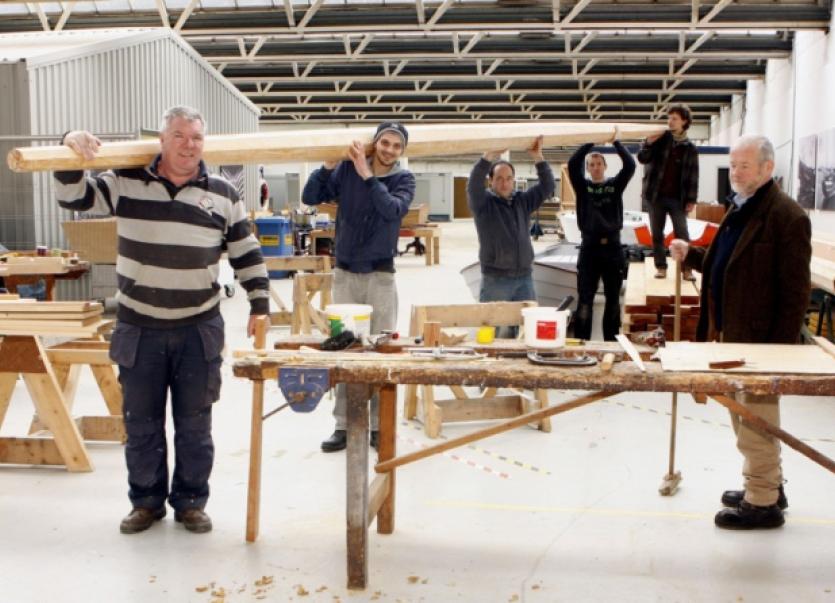 A RARE celebration for Limerick’s growing fleet of boat builders has been witnessed, as the ‘whiskey plank’ was nailed into the hull of the historic AK Ilen.

A RARE celebration for Limerick’s growing fleet of boat builders has been witnessed, as the ‘whiskey plank’ was nailed into the hull of the historic AK Ilen.

The famous vessel was sailed to the Falklands Islands by Conor O’Brien, an Oxford-educated Limerickman and the first Irishman to circumnavigate the globe, in 1927.

Since 1998, after thousands of hours of restoring the ship to its former glory, the project has also seen waves of success, breeding life into Ilen School & Network for Wooden Boat Building in Roxboro, which opened in 2008.

Last Monday, Minister for the Marine Simon Coveney attended the ‘whiskey plank’ ceremony in Hegarty’s boatyard in Old Court, near Baltimore, where it has been patiently restored, with materials transported from Limerick. While the Ilen is not yet ready to the take to the waters, the whiskey plank, traditionally, is the last plank fastened into the hull.

“There are certain immemorial traditions in boat building. It might seem absurd to the land person that you would down tools halfway through the project and celebrate,” said Gary, with a laugh, “but we don’t go against tradition. It’s a very rare thing, as ships aren’t being built.”

Br Anthony Keane, of Glenstal Abbey, one of the directors the school, said the ceremony was “a celebration of an arrival at one of our many destinations – the completion of the hull.

“We must remember that it is destined to go to sea. It has been very beautiful every step of the way. We hope that it has a purpose, and a final cause, and hopefully it’ll go to sea in 2016 or 2017. We’ll sail wherever the Holy Spirit and the wind blows us,” said Br Anthony.

Also in attendance were Kate Jarvey of the Ruth Lilly Philanthropic Foundation, Gerry Boland of the JP McManus Charitable Foundation, and Rear Admiral Mark Mellett, the Deputy Chief of Staff of the Defence Forces. Minister Coveney said those present “should be very proud of what’s been achieved.”

“In many ways this project is going to reinvigorate wooden boat building in Ireland again. Hopefully multiple ports around the country will be able to build projects like this in the future so that we can start to really create a narrative and a story,” he said.

Incense was wafted around the ship’s hull and onlookers drank shots of whiskey in celebration, as well as dabbing some in to the hull of the ship for good luck.

Early experience of working on the boat confirmed a strong belief held by Gary that working with wood, “labour-intensive work”, could provide a transformative experience for participants, and that others could too be consumed by “the mystery” of building boats, both contemporary and traditional.

“The Ilen is almost a sub-project of the school now,” he told the Limerick Leader, pointing to their other successes in their expansive workshop in the LEDP - gandelows, currachs, and the City One dinghy, a faster, high performing vessel.

Their projects have taken them to the Aran Islands and Venice, and they say, the beauty of this project is that there is no final destination in sight.

Since its acquisition, it is the boat-building school itself that has really set sail, counting as many as 60 students a week, coming from across the country and as far away as Brazil, New Zealand, Maine in the US, and Greece, working on all types of fleets.

Organisations such as Headway, which supports people with acquired brain injuries, are among those who have seen their clients reap the benefits of their growing array of programmes.

“It’s really a convivial place where people can come in and out as it suits them; it has an open door, and there are also prescribed classes. We don’t have a complicated administration process. If you walk in the door and you like it, you stay.

“The important thing is having people working with their hands and working in groups. It’s very simple – it’s a roof, it’s benches, it’s working with unrefined materials, and working with people who are really passionate about what they do, and it rubs off almost through osmosis,” he said.

All of their instructors come out of industry, not the teaching profession, “and know their stuff inside out.

“They’re natural teachers, intuitive and learning as they go, and the gaps between the teacher and the pupil are stepped down,” Gary explained.

Many of the instructors, from carpentry backgrounds for instance, have used the opportunity to upskill, working to strict building specifications from the Department of the Marine, and using a variety of wood – larch, oak, ash, black locus, pine, spruce – to build a stronger vessel.

They don’t think about the school in numbers, he said; quantity isn’t how they measure their success.

“It’s really a celebration of the river as Limerick is a coastal town. It’s not always recognised as that – we’re not on the Wild Atlantic Way route. Limerick is inland but it’s still also tidal and has a wonderful port.”

Br Keane believes the practical nature of the school has been beneficial for secondary school pupils who have tipped their toes in these waters. “They don’t gain the same skills from sitting passively in a classroom. It’s a huge liberation for them.”

He said the aims of the school are to “populate the river” even more, and maybe even build another major sailing vessel to “add to the fleet in case the Ilen feels lonely.”

The school has also become a major, and very much welcomed educational and social outlet for men - and a few women - who feared their craft was dying.

Boat-building instructor James Madigan, from Lissycasey, in Clare, started in the school three years ago, having run boat building classes in Clare on a part-time basis. “It’s very rewarding. I trained as a boat builder, but there wasn’t much of a market, so I went into construction. Boat building became more of a hobby, and I was running classes to feed that hobby, but to turn it into a career is wonderful.

“It’s fantastic to have a facility like this in Ireland; it’s a learning centre really and such an important part of our heritage. There’s nowhere else in Ireland where you have the opportunity to do this type of work at the moment. We have skilled craftsmen here, from carpenters and joiners, who are coming here to upskill, working with new materials, and learning new processes and procedures. What I like about it is there’s always room to progress, we can never reach the end.”