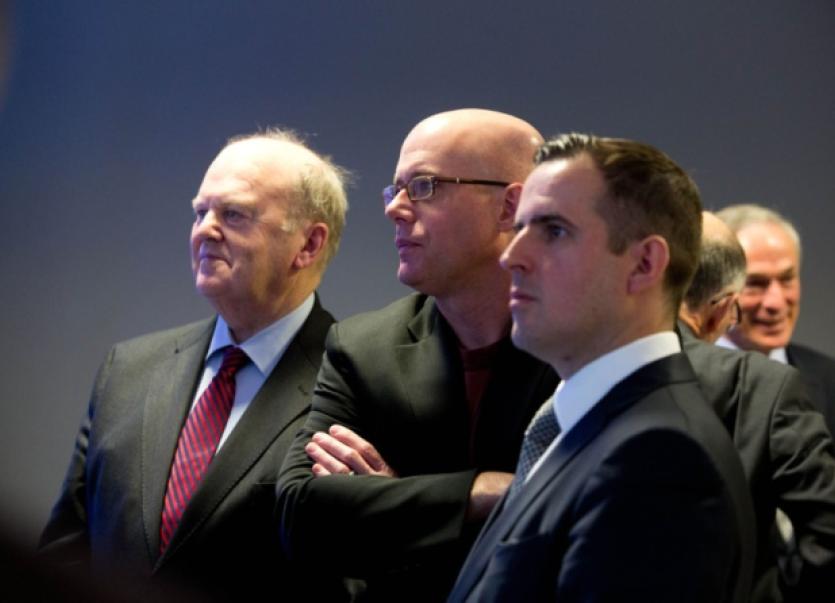 THERE are hopes that thousands of new jobs could be created across a plethora of industries after the government laid out plans to increase employment in the Mid-West region by up to 15% by 2020.

THERE are hopes that thousands of new jobs could be created across a plethora of industries after the government laid out plans to increase employment in the Mid-West region by up to 15% by 2020.

In a week in which biopharmaceutical firm Regeneron announced 200 new jobs as part of a €308m investment in Raheen, the government has said it hopes that a further 23,000 jobs will be created in the region around Limerick over the next five years.

The Mid-West Action Plan for jobs - launched at LIT by Enterprise Minister Richard Bruton - contains 150 specific actions to increase the number of people at work in the region. Included in these aims are a 40% increase in IDA jobs announcements up to 66, an increase of 25% in the number of start-up companies across the Mid-West by putting in place strategic funding.

As well as this, an IDA advanced facility to house office-based companies will be built, something billed as a “statement of intent” from the job creation agency by Fine Gael TD Kieran O’Donnell.

And the ambitious blueprint will also aim to grow tourism numbers to the Mid-West by more than 1.25m by 2025, with tourism revenue as a result growing to €375m.

Food start-up companies will be backed, while Limerick’s life-sciences and financial service sectors will be strengthened to help the plan become a reality.

Meanwhile, it has been claimed that since 2013, a total of 6,000 IDA-backed jobs have been created in Limerick.

Speaking at one of these jobs announcements, at Regeneron in Raheen, Finance Minister Michael Noonan said: “I was talking to (council CEO) Conn Murray last week, and he told me that people in City Hall were keeping a running tally of jobs created. There have been over 5,800 since 2013, and this takes it over the 6,000 mark”.

It is Regeneron’s second major investment in the region, having initially established a base with the creation of 300 new roles.

This new investment, which will bring to 500 the number of permanent staff at the former Dell factory in Raheen, is up to three years ahead of schedule, Mr Noonan claimed.

“We expected a second phase announcement when Regeneron came, but not for another two-and-a-half to three years. The fact their investment has gone to $650m with a staff of 500 people is phenomenal. It is what you call a ‘sticky project’: when you put in that type of money, you do not move out quickly,” he said.

Regeneron’s senior-vice president Dan van Plew has also hinted at further job creation in Limerick. The expansion of the firm’s operation in Limerick is “critical” as its New York headquarters is over capacity, he said.

Regeneron - which manufactures and commercialises medicines for the treatment of serious medical conditions including eye diseases - is to bring its permanent workforce to more than 500 people over the next 15 months at the former Dell factory.

The high-end specialist jobs will be positions in commercial manufacturing, process sciences, quality assurance and control and various support functions for scientists, chemists and technicians.

All this means that Regeneron’s base in Raheen will be the largest capacity biopharmaceutical production facility in Ireland.

Mr van Plew said: “We are overcapacity at our New York facility, so it is critical we get this up and running to allow the company grow and move.”

He paid tribute to Limerick’s public, saying: “Quite frankly, the expansion is due to the success we have had, and the belief we have in our products. We love it here. We have had great luck with the people.”

He praised the “receptivity” of local businesses, the government and the public.

“Obviously, we did a global search when we were looking for a site, and we settled on Ireland because there was a common language, and it is in close proximity to our partners in France and Germany,” he said.

Regeneron operates from a 400,000 square foot facility which was once home to workers assembling desktop and laptop computers.

But since Regeneron chose Limerick for its initial $300m investment, Mr van Plew revealed that there have been 2.1 million hours spent to get the facility back to operation.

“It was a Herculean task to take a dormant building and bring it back to life. So my hats go off to the team here. They have really done a fabulous job which has given us more confidence to invest in Raheen,” the executive said.

Finance Minister Michael Noonan said he is impressed at the pace of development at Regeneron.

The minister said: “That we are back again so soon lifting the target from $300m to $650m and increasing the job count by another 200 highly-paid jobs, I would just like to congratulated everyone involved. It changes the face of Limerick.”

Regeneron already employs 4,000 people globally, and Mr van Plew insisted there is no reason the firm cannot carry on its expansion.