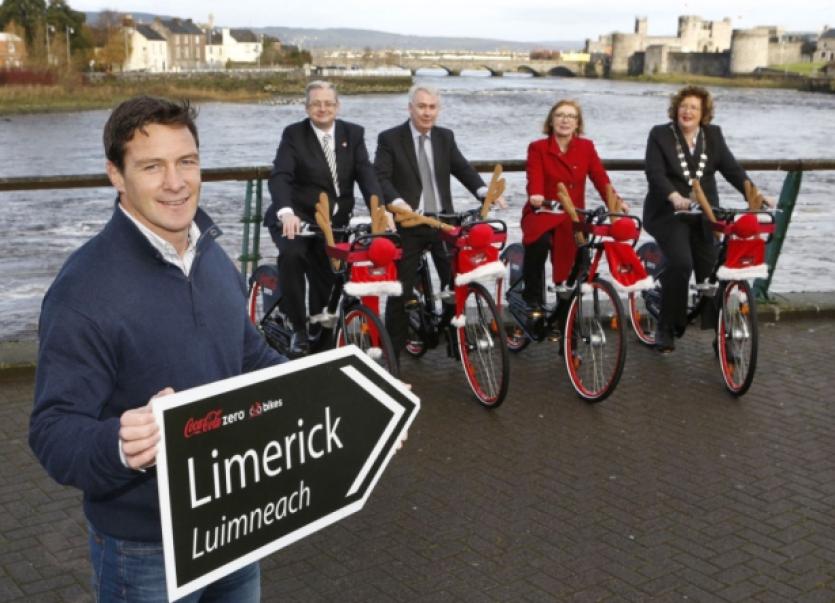 The National Transport Authority, who are backing the scheme along with sponsors Coca-Cola, released figures to the Limerick Leader this Wednesday, which indicated that 766 people had registered for the scheme after just two days of operation.

Given it was only launched officially on Monday by Minister for Education and Skills Jan O’Sullivan, those figures bode well for the initiative, which mirrors those in Dublin and Galway, and soon to follow in Cork.

The Coca-Cola Zero Bikes scheme will roll out at 23 stations and with 215 bikes available for use throughout the city area when fully complete.

At the moment, there are currently 15 of the stations up and running in the city in a scheme that has been universally welcomed. And could be extended out to UL and LIT if it is deemed a success and enough people sign up to utilise it.

Speaking to the Limerick Leader at the launch, Minister O’Sullivan said the scheme was “an excellent departure for Limerick”.

Asked if she felt the scheme was comprehensive enough, the Labour TD said: “Well, it is probably not for me to say, but I would imagine it would be kept under consideration whether it would go further out.

“There are a significant number of stands and certainly I think it will give people real opportunity around the city centre and Limerick is a very good city for cycling.

“I think it is fantastic, it is good for a number of reasons, obviously it is a healthy way to get around, it reduces carbon emissions, traffic and generally I think it is a very positive development,” she added.

Deputy Mayor Cllr Maria Byrne joined the minister in launching the scheme in the Savoy Hotel, joined by Hugh Creegan, deputy CEO of the National Transport Authority and Frank O’Donnell, general manager of Coca-Cola HBC Ireland and Northern Ireland, plus former Munster and Ireland rugby player David Wallace, and confirmed that the scheme would be extended if it proved popular.

“There are 20 stations currently and the thing is that if it works and people start to use it, there is money there to roll out a programme,” said Cllr Byrne.

Asked if she would like to see the scheme extended to the colleges - MIC is already included - on the fringes of the city, she said: “Absolutely, I know it is outside Mary I at the moment, but certainly I do think it will be a success and that it will be extended.

“I know a lot of the stations are within the city centre but, it is about tourists as well, when you go to other European countries you have bikes at every location.

“Twenty stations is an awful lot and I have to say that the bikes look very well, I saw them being put in over the last few days and I do think it is a very positive scheme altogether,” she added.

She said she hoped it would be expanded in due course.

“I really hope that the scheme will be successful and that the local authority, together with the National Transport Authority and the Department of Transport will pursue the expansion of the scheme as quickly as possible,” she said.

“Environment Minister Alan Kelly has already indicated that the scheme will be expanded to include UL, LIT and other areas.”

The public-bike scheme, which is similar to the scheme already in operation in Dublin and recently launched in Galway, is being jointly funded by the Department of Transport and Coca-Cola Ireland.

A number of stations have already opened in the city and the public can sign up to the scheme for an annual subscription of €5. The full 23 stations are to open in the “coming weeks”, a spokesperson outlined.

David Wallace, the former Munster, Ireland and Lions rugby forward, said it was a “fantastic” scheme.

“If you go to any European city around the world, you see it working successfully and it does so in Dublin, so it is great now to see it in Limerick,” he said, confirming with a smile that he would be signing up to the scheme himself.