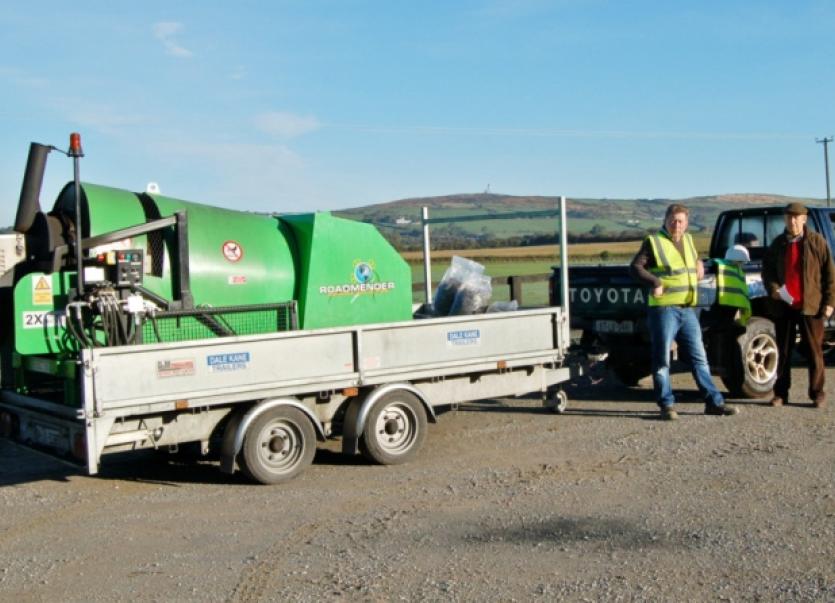 AN innovative machine, conceived, designed and created here in Limerick, could revolutionise Ireland’s roads and consign potholes to the realms of bad memory, according to Ballingarry businessman David Pearl.

AN innovative machine, conceived, designed and created here in Limerick, could revolutionise Ireland’s roads and consign potholes to the realms of bad memory, according to Ballingarry businessman David Pearl.

Already, nine machines have been bought by companies in Britain, several more are on order and one has even been sent to Ontario, Canada where it is being used to repair potholes at very low temperatures.

But now, the challenge for David Pearl and his business partner, Tom Fennessy from Croom, is to get their Roadmender accepted by local authorities here in Ireland.

Roadmender, David Pearl argues passionately, is unique. And he has unbounded admiration for the skill, knowledge and genius of Tom Fennessy who designed the prototype and has developed it into two working models.

“What it does is it provides top-quality hot-mix on site in small quantities,” David explains. This makes it ideal for fixing potholes or for re-instating roads that have been dug up for services or to repair pipes.

But the beauty of Roadmender, he says, is that it saves the time that might otherwise be used in going to a hot-mix plant. It can also re-use the “break-out” or plainings from a pothole or road-break and recycle them, on site, to be used as a base course.

“You take the break-out, chuck it into the machine, you heat it and mix it and it can be used for underlay,” David explains.

The second phase in the process involves heating a special mix and applying that as a top course.

The finished result, David says, is far superior to a repair job where chips are thrown into a pothole and topped up with hot tar.

And he is convinced that Roadmender would also be hugely cost efficient for local councils.

David Pearl’s own journey to Roadmender has been unusual. An Englishman whose business background is the world of finance and hedge funds, he moved to Ballingarry with his wife Ros in 1997.

But, as he told the Limerick Leader: “I am commercially promiscuous.” So, when his son Harry began making an asphalt product in England that could be heated on site, David’s thought was: “That could be good for Ireland.”

But then, he says: “We found nobody had a machine here.”

This was where Tom Fennessy stepped in, and created the prototype that has now evolved into Roadmender.

Since then, he adds, it has taken 18 months to get it CE rated and then the product Roadmix had to be CE rated which took a further 18 months.

But, given the proliferation of potholes in the country, he is optimistic that this is one business idea that will prove to be very popular.