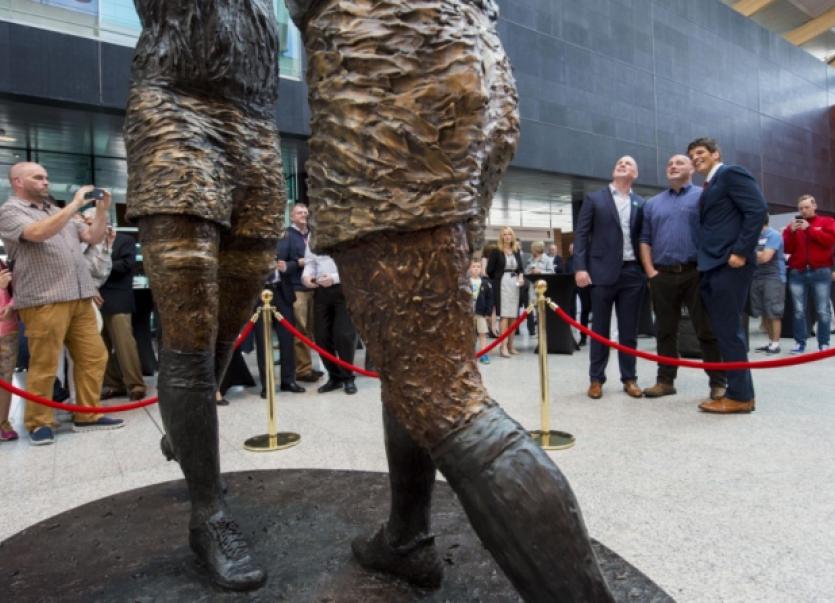 He, like everyone else milling about the terminal, was there for the unveiling of a special piece of history.

A vast, 20ft high sculpture showing an iconic moment in Irish sport – a lineout from the unforgettable day in 2007 when the Ireland rugby team beat England at Croke Park – was still under wraps, waiting to be unveiled by the three men it captured in bronze – O’Connell and his Munster and Ireland team-mates, John Hayes and Donncha O’Callaghan, the two giants lifting him into the sky.

The giant Hayes was typically keeping a low profile alongside his family as O’Connell was greeted by well-wishers and somebody announced that O’Callaghan was delayed in traffic en route from Munster training in Cork.

Also mingling was Sean Kelly, the former president of the GAA who did so much to open Croke Park to rugby and soccer, after much early opposition from within his own ranks.

As guests waited for O’Callaghan’s arrival, the man who created the sculpture – Paddy Campbell – spoke to the Limerick Leader about how he was helped in the task by the three men he has immortalised.

“I met the three of them individually,” he said, “because I wanted to understand their personalities and also what was going on in their heads on the day and generally where they were in their lives. Whatever was going on under the skin is just as important as getting a likeness.

“They gave me a lot of help – and an understanding of how the whole lifting process works. I had to understand the mechanics of it and the choreography and I was privileged to get a lesson from Paul, in particular. So that definitely paid off. I understood the roles much better.

“I’ve described it as being like a ballet. The choreography is very detailed – you are trying to confuse the opposition. When you look at it from the stands it all seems very random, but you realise after talking to the players that it’s far from that.

“It was Keith Wood who said to me, ‘That was the day that changed Ireland.’ And that sums it up. That’s what the sculpture is about.”

The aforementioned Wood, who provided an eloquent inscription for the sculpture, knows all about the choreography of the lineout. As a world-class hooker who threw countless darts, he nodded at the height of the sculpture and complimented the footsoldiers underneath the soaring O’Connell, saying: “Paul can’t jump to that height unless he’s got two giants of men lifting him.”

As he spoke, O’Callaghan was making his entrance and soon the moment was at hand. All three rugby heroes were invited to pull back the covers and there was instant applause when the sculpture was finally revealed. It looked even bigger than anyone had imagined and it was met with instant approval.

The sculpture is based on a photograph taken by Cyril Byrne of The Irish Times and Shannon Airport’s Scottish CEO Neil Pakey said he had seen the picture proudly framed in quite a few offices he visited after arriving here.

“Great airports create and capture their own sense of place, and this piece by Paddy Campbell helps to evoke the passion, culture and interests of this region,” he said.

“Sport is one such interest and this game in 2007 was more than just a rugby match; it brought sporting and political traditions together.”

As the stars of the sculpture posed for countless pictures, O’Connell declared himself well impressed with Paddy’s work and delighted that he and his fellow forwards were “lucky enough to be the three guys in the picture”.

The Toulon-bound Ireland captain also said it was “a small bit embarrassing” that he had also been singled out for maximum exposure after a huge banner thanking him for his contribution to Munster was erected overhead Brown Thomas on O’Connell Street, followed by an equally eyecatching mural in Mulgrave Street.

“I would never have seen myself playing for another club,” he said, “but when this opportunity came up it was something I thought about for a long time.

“The main thing in the decision was how Munster people perceived it – whether they would be disappointed by me. Most of the time you don’t worry about what people will think, but when it came to this, I was very worried about what Munster supporters would think and say. But the reaction to them has been very humbling. It makes me feel, going away, that I am going with people’s best wishes.”

If his journey to France starts at Shannon Airport, he won’t be able to miss the giant statue of one of his most memorable days in rugby. Neither will anyone else passing through.