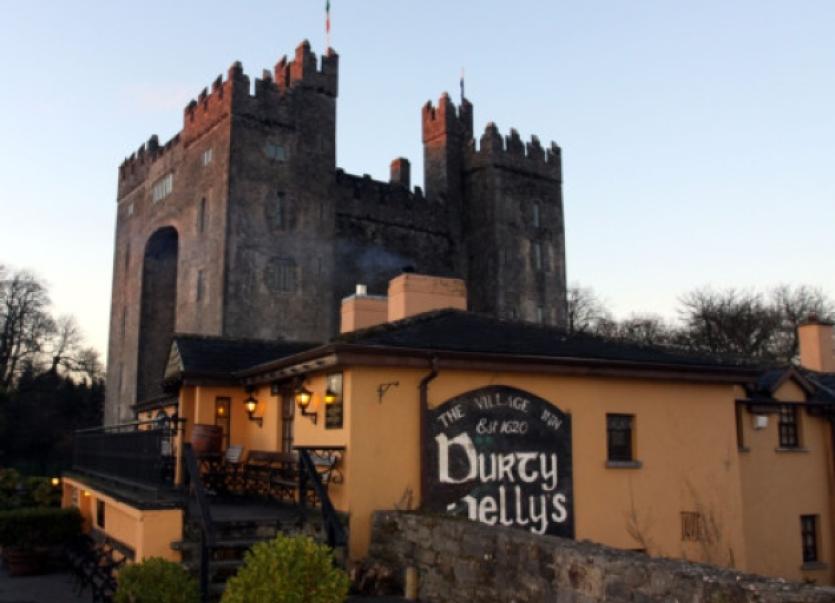 ONE of the country’s most famous pubs, which spawned hundreds of Irish bars across the world, has been sold for “a fraction” of its €12m sale during the boom.

ONE of the country’s most famous pubs, which spawned hundreds of Irish bars across the world, has been sold for “a fraction” of its €12m sale during the boom.

The new owners, two Dublin based business partners, said they are delighted to have acquired the famous watering hole, Durty Nelly’s pub in Bunratty, Co Clare, which has been in existence since 1620.

Martin Scully, 50, of Merrion Row, Dublin and his business associate Mary McCoy, 43, of Dundrum, acquired the bar from Bank of Scotland, after its previous owners saw NAMA take control of some of their assets.

Mr Scully, a director of 12 companies, said they were the “highest bidder” for the property, but its price remains “confidential.”

“It is a jewel in the crown and we are very happy that we were lucky enough to acquire it. We didn’t pay anything near that [€12m]. The price reflected market conditions.

“It’s a great acquisition and while its trading performance was not strong, it has been holding its own. We put a business plan together and we lucky enough to acquire with it. Hopefully we’ll benefit from the anticipated recovery in the economy,” he said.

In 2008 it was bought by Ennis based businessmen Sean Lyne and Noel Connellan, but the developers received €19.5m judgement orders from the Commercial Court three years after buying the landmark pub, arising from unpaid loans from Zurich Bank for development land in Cavan.

The two men bought the nearby Shannon Shamrock hotel in Bunratty from the Fitzpatrick Hotel group for €13m in 2004.

They also acquired Tinerana House near Killaloe, Co Clare, for €14m, alongside other local businessmen who had plans to turn it into a major tourism, sports and leisure resort.

The property, which has 16 bedrooms and 15 bathrooms, was put up for sale by the receivers, and recently bought by Euromillions winner Dolores McNamara.

The businessmen, who have extensive property interests in Clare and throughout the country, have had some of their company loans transferred to the National Asset Management Agency.

Company accounts seen by this newspaper show that they ceased being directors of Durty Nelly’s in recent months.

Its earlier sale for €12m was reputed at the time to be the largest sale for a pub outside the capital.

Mr Scully said he has been familiar with the pub and the area for many years, and greatly appreciates its loyal customer base. He said there has been no change in staff or management at the pub, which is manned by 40-45 staff, and they don’t plan to make any dramatic changes to the pub, with the exception of broadening its food menu - and upgrading the toilets.

“Everyone seems to be very happy, we’re getting very good reports, and we’re trying to improve the odds as we go. We’re looking forward to putting it back on a firm footing, and we’ve made great strides there already.”

He said that trade at the bar, which is nestled in the shadow of the 15th century Bunratty Castle, was given a welcome boost after the recent arrival of three bottlenose dolphins in shallow waters nearby, which proved to be a major tourist attraction, joking that it was a pity “we couldn’t have built a dam to keep them there.”

While the business partners don’t currently own any other pubs, he said: “We would and are looking for other opportunities in a similar type vein.”

Over the years, it has been a near-compulsory stop for tourists travelling along the west coast of Ireland, and has been frequented by celebrities including John Travolta, George Best, Jack Charlton and Katie Price.

The name of the pub has been replicated across the world in Irish pub-themed bars, from Amsterdam to Sydney.

Legend has it that the pub lends its name from a spinster woman who lived in a cottage on the current site of the pub and charged a toll for all those crossing the adjacent bridge over the Owengarney river between Ennis or Limerick.