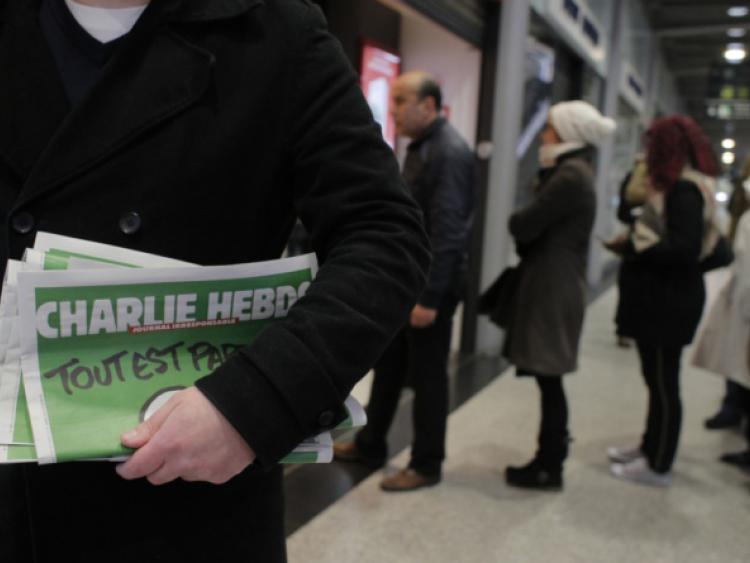 THE MANAGEMENT of a Limerick school has apologised to a Muslim pupil, who took offence when a copy of the controversial French newspaper Charlie Hebdo was produced in his classroom.

THE MANAGEMENT of a Limerick school has apologised to a Muslim pupil, who took offence when a copy of the controversial French newspaper Charlie Hebdo was produced in his classroom.

The mother of the 11 year-old boy, who is in fifth class, has spoken out about the incident to highlight her “concerns and outrage”, as she claims her son was “subjected” to a copy of this newspaper being passed around the classroom, as were other Muslim children in the class.

The mother, whose four children are being brought up in the Muslim faith, all attend the Limerick School Project on O’Connell Avenue in Limerick city because of its’ “educate together ethos.”

“Each child was told to read it and look at a picture that depicted the prophet Mohammad. This picture has cause great insult within the Islam community in Ireland and the world,” she told the Limerick Leader newspaper.

“My son is not the only child within the class that is Muslim and when he explained to the teacher that this such picture was offensive to him and his religion the teacher told him that ‘it was part of his lesson’,” she claimed.

“Ireland in 2015 has become more multi-cultural than ever and we as parents teach our children every day to be respectful of other people and their cultures as well as their religion. How are we supposed to achieve this respect with in our country if our educators are not mindful of the different cultures and religion in our class rooms,” said the mother, who does not wish to be identified.

However, the chairman of the school, Richard Allen, said this was an “unfortunate incident” and said apologies for any offence caused were made to both the boy and his mother.

He explained that it was another young pupil in the class who brought the most recent copy of Charlie Hebdo into the school - and not the teacher - while they were having a discussion about the French Revolution and freedom of speech.

Some 100 copies of the survivors’ issue of Charlie Hebdo sold out recently in Limerick, as soon as they went on sale in one newsagents.

He said the class had earlier seen some of the coverage of the terrorist attacks in Paris, and on the offices of the satirical magazine, which killed 12 people, on the children’s news programme on RTE, called News 2Day, and said they regularly discuss news events.

No issues regarding the subject matter were raised then, he said, and no other parents of the Muslim faith brought any complaints to the school after this incident.

On the offending occasion, one of the Muslim pupils had left the class to go to the bathroom, and when he returned he found that his teacher was holding up the cover of the newspaper, showing it to the class.

The pupil told his teacher that the newspaper’s cover - which features the Prophet Muhammad weeping after the Paris attacks - was offensive to him.

The teacher apologised, and asked the young girl who had brought it in to put it back in her bag, Mr Allen said. The cartoons and the articles in the newspaper were not discussed by the class, and nor would they have been understood by all, as the publication is in French.

Mr Allen said they “respect all religions and none” in the school, and “would never set out to cause offence to anybody”.

Nonetheless, he said the multi-denominational school, which has over 200 pupils, believes in the right to freedom of speech, though at the same time it recognises that responsibilities come with this freedom.

“We live in a society where information flows freely, and we can’t be like we were in this country in generations past where we hid things. Children have a right to discuss these things, understand them and have a view, but also understand there’s an inherent responsibility that comes with free speech. Children take in an awful lot of information, much more than we as adults would think [they do]. You do a disservice to 11 year-olds at times when you think they don’t understood,” he said.

Discussing certain subjects, such as this, he said “present enormous challenges” for educators in the school.

“But what is better - to put the facts out on the table and discuss them, or to hide them? If the information is published and is available, children need a forum in which they can discuss it,” he said.

Mr Allen said they can’t control everything that children bring into the school, “nor do we want to. We have to teach them individual responsibility. Our pupils are on a first name basis with their teachers. We have no uniform, and our no mobile phone policy is the same for teachers, as it is for pupils. Our whole ethos is based upon respect, and that’s why it’s disappointing to have issues like this. In every walk of life you’ll have issues, but it’s about how you respond to them.”

He said they have pupils of diverse backgrounds and faiths in the school, and some with no religion, and said an incident like this had never happened before.

“The whole ethos of this school is based upon respect. We teach students as much about Islam, as we do about Christianity. We don’t have religious education classes in the school, but we can make this available to any religious groups after school. We also don’t offer First Communion in the school. We teach pupils individual responsibility,” he said.

The school is celebrating its 25th anniversary this year.