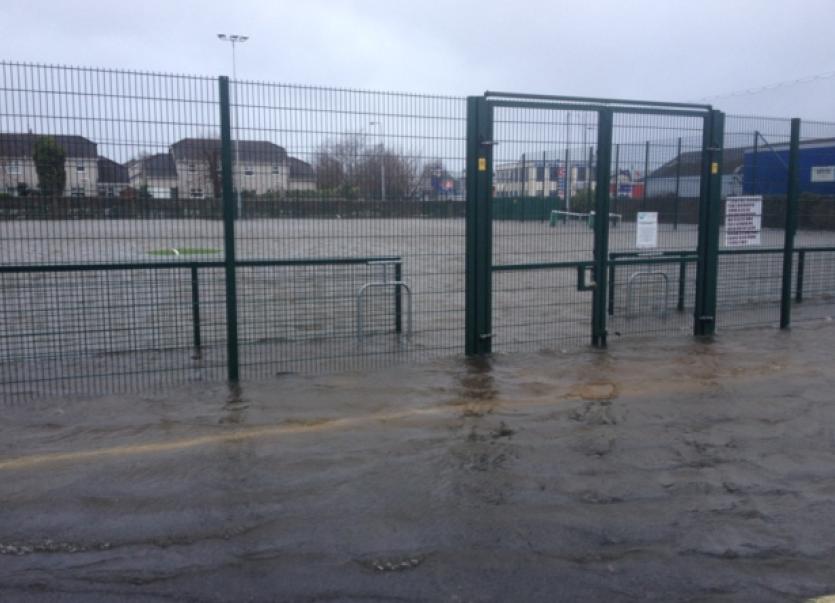 THE surface of an astro-turf hockey pitch in Laurel Hill has been “completely ruined” by the recent floods.

THE surface of an astro-turf hockey pitch in Laurel Hill has been “completely ruined” by the recent floods.

The carpet on the pitch, which cost upwards of €500,000 to build and was officially opened in September 2012, was destroyed by the floods on February 1, with the Dock Road one of the areas worst affected in the city.

The facility was a joint venture between the two schools in Laurel Hill, and early estimates suggest it could cost up to €100,000 to replace the surface.

Coláiste principal Aedín Ni Bhrian said that both schools are “determined to reinstate it fully as quickly as possible”.

“We basically need to re-carpet the whole thing,” she explained. “The water came in over it from the Dock Road side, into the pitch. We are very disappointed because we were a long time fundraising for it.

“The two schools have agreed that we are going to reinstate the pitch but we don’t know yet in terms of funding and how much it is going to cost,” she added.

Director of hockey in the Coláiste, Christine O’Shea, witnessed first hand the flood damage in attempting to save equipment on the morning of the floods.

“It was up to nearly my waist when I went in, that was about 11am. The water levels had dropped a bit about an hour and a half later - but the damage had been done,” she explained. “It was hit really hard. The carpet is completely ruined on it. We have to wait until September at the earliest to have it back. It could be €100,000 worth of damage, to put down a whole new carpet. The work involved is considerable,” she said.

Ms Ni Bhrian explained that the pitch was built through “a mixture of fund raising and sponsorship and a lot of work from parents councils”, while support came from the JP McManus charitable foundation.

The principal said that “nobody remembers that ever flooding like that - going back over 80 years”.

“It might have been a particular set of circumstances but that has never flooded before ever,” she said.

“Obviously we were distraught because people had put a lot time, effort and money into it, but your heart has to go out to people whose home were ruined - that is the top priority. It is a pitch and we are disappointed, but we will rebuild.”