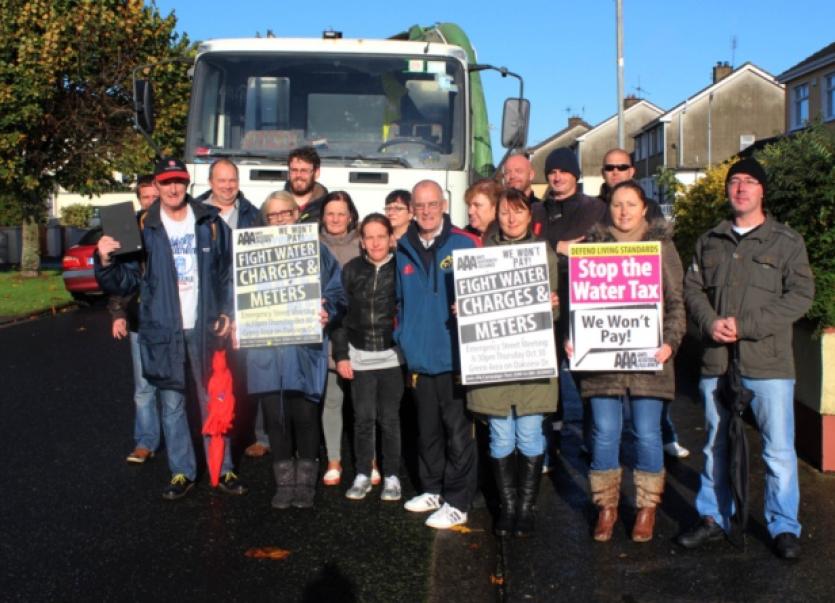 IRISH Water workers have been stopped from installing water meters in Limerick city estate, in a move hailed as “a big victory for people power”.

IRISH Water workers have been stopped from installing water meters in Limerick city estate, in a move hailed as “a big victory for people power”.

Gardai were called to a stand off on Monday morning at Ballinacurra Gardens, where around 50 demonstrators blocked access to staff who had planned to install water meters at 40 homes.

But despite two garda patrols being brought in to try and resolve the impasse, staff at the embattled state firm packed up and left.

A former Fine Gael mayor of Limerick, who lives in the estate, has since predicted that water charges will be abolished, days after tens of thousands of people took to the streets in protest.

Ex-councillor Jim Long said his party has “made a mess” of the water charges issue, and called on Taoiseach Enda Kenny and Finance Minister Michael Noonan to order a halt to water meter installations.

Irish Water workers arrived early in Ballinacurra Gardens on Monday, but were met by a picket of protesters.

Gardai were called, and when they arrived, Cllr Loftus added that the group were warned they could face arrest under Section 8 of the Public Order Act.

“Did they believe there was going to be a public order offence? Do you think someone is going to be injured, or would damage property? Or did they feel threatened by us?” Cllr Loftus asked.

“Half the people here were women, and quite a lot were elderly, and they were all willing to be arrested.”

After the exchange, a second garda car arrived at the scene, said Cllr Loftus. But the Irish Water workers departed the estate at around 10am.

“It’s a big victory for people power,” said Cllr Loftus. “Everybody here is determined. We will all be here again. The people were not scared of being arrested. There were people here with kids, and pensioners, males and females. Everybody stood up and when they were threatened with arrest, they just said ‘on you go’”.

In the order of 10 public stand-offs have now taken place across Limerick city estates as Irish Water staff have attempted to install meters but have been faced with co-ordinated community efforts to block installations.

An Irish Water spokesman said that it “respects the right to peaceful protest and endeavours to facilitate this right in so far as it is reasonably possible, while maintaining the safety of its staff, the public and site of work.”

Meanwhile, Mr Long said: “I think the charges will be abolished, but there will be the introduction of a levy instead. Somebody is going to have to be held accountable for the way this has been approached. I would go back and re-visit the scenario of how treated water is paid for. I think we need a referendum on the matter.”