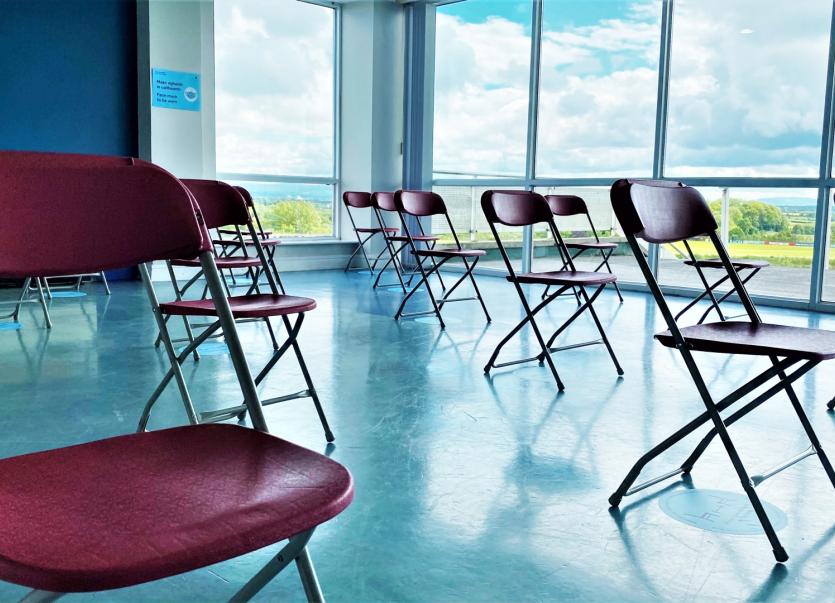 A waiting area at the vaccination centre at Limerick Racecourse

THE UL Hospitals Group has confirmed no Covid-19 vaccination appointments are scheduled to take place at the Limerick Vaccination Centre this Saturday due to a scheduled horse racing meeting at the Patrickswell venue.

The closure, which was first reported this Friday morning, has attracted strong criticism with some TDs describing the decision as unacceptable and an "affront" to the people of Limerick.

In a statement, UL Hospitals insists there will no impact on the vaccination programme in Limerick and that 24,000 vaccines will be administered at Limerick Racecourse next week.

"As part of the agreement allowing for the relocation of the vaccination centre from the Radisson Blu to Limerick Racecourse, it was agreed that due to movement to and from the site for the race meets on June 12, June 18, July 4, July 10 and July 22 no vaccinations would be scheduled on those dates," read the statement.

Professor Paul Burke, Chief Academic Officer of UL Hospitals Group, and the Group Lead for the three Mid-West Vaccination Centres, says these agreed dates will not result in any delay in delivering Covid-19 vaccines to people in the Mid-West, due to the significantly increased capacity of Limerick Racecourse compared with the facility at the Radisson Blu Hotel.

"With a maximum capacity of 46 vaccination booths compared with the 32 available at the Radisson Blu, the Racecourse centre allows us to offset any delay in our vaccination programme that would have been caused in allowing for the relocation to the Racecourse, and from the events calendar at the Racecourse itself," he said.

"Next week, we will be administering 24,000 vaccines at the Racecourse centre, and 7,000 each in the Ennis and Nenagh centres. Losing the days scheduled for the race meetings will not impact, because of the significant increase in booth capacity," he added.

UL Hospitals says there have been no cancellations involved as a result of tomorrow's event and vaccine appointments have been offered to people at vaccination centres in Nenagh and Ennis.