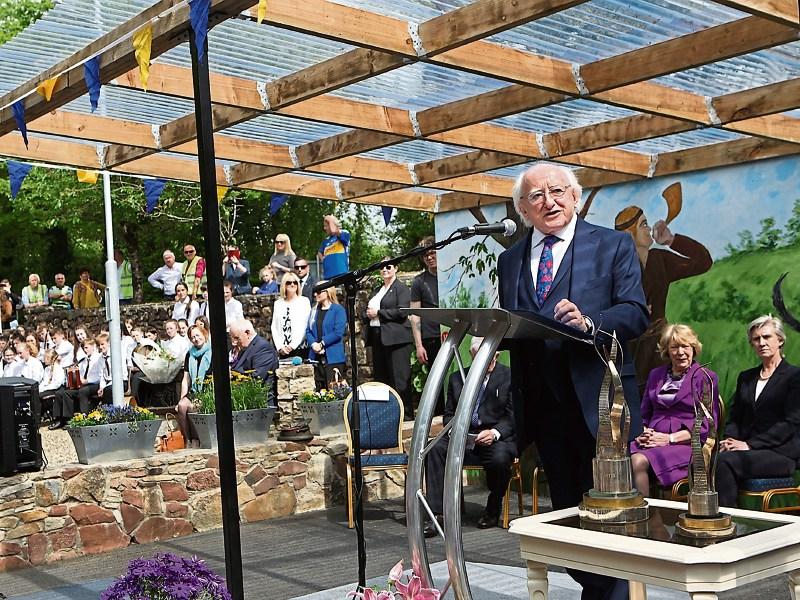 THE sun kept up its part of the bargain this Saturday as President Michael D Higgins unveiled a commemorative plaque in Birdhill to mark its Tidy Towns success.

The picturesque village, which is just a stone’s throw from Limerick city, was voted the overall winner in last year’s national competition which is sponsored by Supervalu.

On their arrival, President Higgins and his wife, Sabina, received a guard of honour from second class pupils from Birdhill National School who made their First Holy Communion earlier in the day.

“They put off whatever they had booked, it was a momentus occasion and they were really delighted to be here. I thought they looked gorgeous and it really did add something and they have a photo now on their Communion Day with the President of Ireland and there are not too many people who can say that, “ said principal Miriam Kennedy.

Having made his way to the community garden on the Newport Road, President Higgins then addressed the large crowds who gathered for the occasion.

He praised everyone involved in the Birdhill Tidy Towns from committee members to volunteers saying all had contributed to last year’s success.

“Winning this award didn’t happen by chance or coincidence but by your sheer hard work and commitment. And it is that commitment over many years which has given Birdhill a proud new chapter in its history. Your day of glory is much deserved,” he said.

Denis Floyd, chairman of Birdhill Tidy Towns committee said the unveiling of the plaque by President Higgins was a proud occasion for everyone in the local community.

“Today is a wonderful day for Birdhill – a day when the little village epitomised by (Charles) Kickham takes centre stage and stands proud. Birdhill is a small village, small but big in spirit where a supportrutve community sustains our activities and our inclusive ethos ensures a welcome for all,” he said.

Following the formalities, President Higgins and his wife mingled and chatted with the large crowds who had gathered for the occasion.

A great day today in Birdhill County Tipperary as the @PresidentIRL visits to congratulate the people on winning @TidyTownsIre Watch the full story on @RTENationwide Monday at 7pm on @RTEOne Pls. RT pic.twitter.com/OKw8aA2QQK