Wild About Wildlife: In fairness the gulls were here first 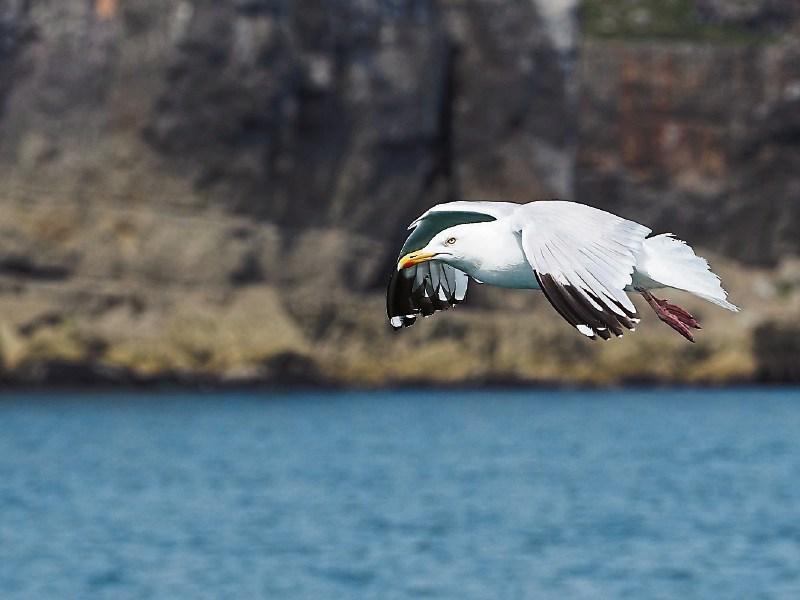 The herring gull, the most common species of gull found in Ireland have earned a bad name for their aggressive behaviour towards food Picture: Pixabay

THE loud calls of the herring gull echoed along the street. I immediately turned and looked up towards the roof where the parents and their two chicks were perched.

I was expecting other people to follow suit but all kept their hands and eyes on their phones. Perhaps the gulls have become so familiar that they hardly warrant a second glance by most people.

These birds have become the most typical large gulls of the built up urban environment. In cities like Limerick they have swapped their sheer costal cliffs for the flat roofs of tall city buildings. These manmade structures mimic their natural habitat and the population of urban herring gulls has been slowly increasing each year.

We had pulled in for food at a take away in the middle of Limerick City on our way back from a day trip to Galway. This had provided an even closer encounter with this iconic city gull. As we parked in the multi-story car park Harry spotted an immature gull perched by a car.

We went over for a closer look and the bird did not try to fly away. It was a herring gull but it had a cut on its head and it did not look to serious. This could have been caused by a collision with a car or more than likely a battle with an adult gull for food.

As we walked towards the stairs we saw lots more gulls all around the car park. The roof level had been blocked off to cars and this had become a nursery for the gulls. There were several immature birds and the parents were nearby preening their feathers. This is a predator free environment and the parents can go and bring back food knowing that their chicks are safe.

Herring gulls are now firmly established in many inland urban areas and generations of gulls have been born on buildings with little or no connection to the coast.

Adult herring gull are large and bulky with a yellow bill. This has a distinctive red spot. They underparts are mainly white while their underparts are light grey. The real fun and challenge stars with trying to identify the immature birds.

They come in a sometimes bewildering range of browns and blacks and it can take up to four years before they get their full adult plumage. Each year they go through two moults, one coming into the summer and the other in the winter. You can often find birds at all stages in the same location.

With a lot of patience and observation I have slowly got to grips with gulls but I gain heart from the struggles of even the experts.

The herring gulls legs are pink at all stages but colour is not my strong point and it can be a difficult feature to identify especially if they are floating on the water.

Herring gulls are mainly scavenger and have a very catholic dirt. They will eat insects, earthworms, berries, eggs and fish. They also take carrion including dead fish and aquatic birds and mammals.

In urban areas they scrounge for take away food including chips and also around dumps and takeaways. I have seen people, at the beach feeding the gulls and in one sense it is better than throwing the food in the bin.

This diet is fine for us as we only really indulge when we are on holidays. But for gulls it is like they are on this high fat salt diet for the entire summer and this could lead to long term health problems.

Feeding the gulls can also become a public nuisance issue. The gulls can be become very brazen very quickly and see all food in human hands or on the table as their by rights. This is unfair on the gulls as they were trained into the habit in the first instance by human hands.

This is one of the many interesting and complex issues around wildlife. We encourage closer interaction and connections but this can lead to other challenges.