Wild About Wildlife: Finding emeralds at the end of July - Albert Nolan 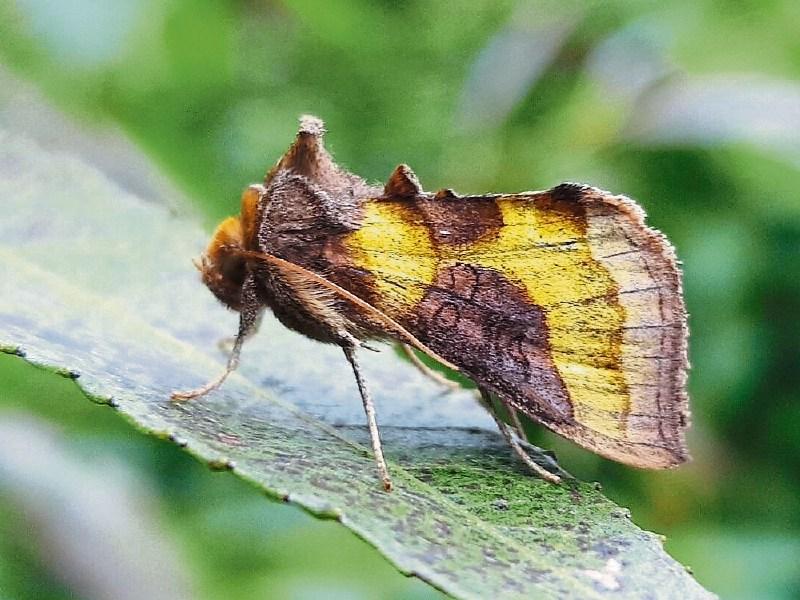 I had not run the moth trap for a while as the weather was wet and windy and we were waiting patiently for the right conditions.

Also the July catch can run into the hundreds and I needed a following morning, where I had the time to sit with the guide and identify.

As I dug on the moth trap from underneath a pile of stuff an old TV slipped and broke the plastic covering that stops the moths escaping. Not one to be daunted I soon applied a layer of sticky tape and the trap was soon set up and waiting for the moths arrival.

I was up bright and early and the only company I had was a cheeky and hungry robin. I had to be really careful releasing the moths, as the robin was keeping a beady eye on my every move.

The July moths are as diverse and colourful as the flowers in the countryside. These butterflies of the night have an unfair reputation of been dull brown jobs. While some of these do exist, many have beautiful and intricate patterns and colours. Earlier in the summer i sowed night scented stock in pots and these are near the trap and help bring in a few additional species.

The first moth was a real stunner and no photograph can do justice to the dazzling green colour of a fresh Emerald moth. I had not caught one in several years and the larva feed on birch and alder and there are plenty of these trees in the woodland area.

As I gently lifted up the next egg cartoon a garden tiger leapt out of the box. This moth has white and black patterned main wings, but its underwings are a bright orange with black dots. There larva are known as woolly bears and one visible sign of insect decline is that these caterpillars no longer march across roads in summer. Many readers might remember catching them in old biscuit tins or jam jars.

Burnished brass looks like it has been polished and is another moth with a mainly green body. The green carpet continues the green theme, but until you examine moths close up you don’t realize how many subtle shades of green there are in the animal kingdom.

The spectacle is very unusual and it looks like it is wearing a pair of glasses and we also caught a few flighty clouded borders. These are white with a brown border that varies in intensity and thickness.

The following day I was at a friend’s house for his son’s confirmation. We were all relaxing and chatting when his kids came down and told us they had found a yellow moth upstairs. I thought it might be a yellow underwing, but I was persuaded to go for a look.

I was delighted I went up as it turned out to be an uncommon swallowtail moth. The moth is light yellow and it had picked the perfect resting spot. Its colour was the perfect camouflage against the yellow clothes basket. The bedroom window had been open the previous night and the moth had been attracted in by the light.

He was released in the garden but not before helping to spread a little knowledge about moths.