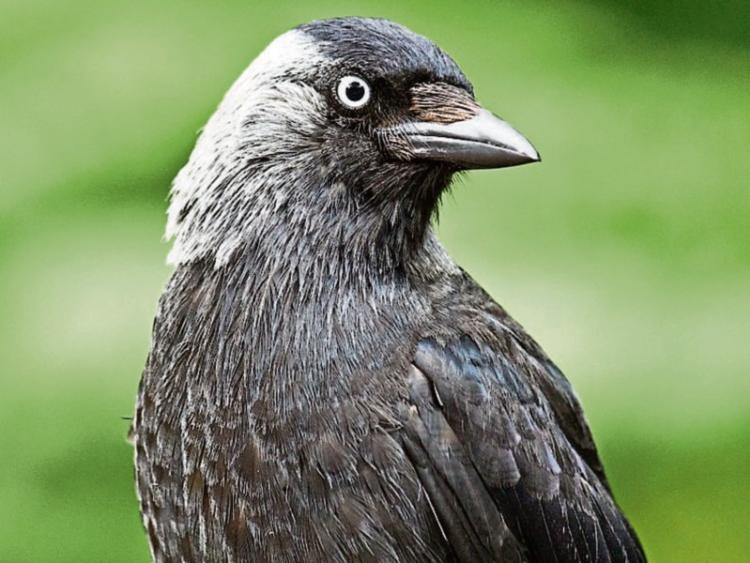 Jackdaws are the smallest member of the crow family (collectively known as corvids), which also includes ravens, crows, rooks, jays and magpies

I was out walking around town and enjoying the cool and fresh autumn air. A thick carpet of leaves were scattered on the path. One student told me recently that crunchy leaves underfoot are a sign that the summer has ended.

As I strolled between the houses with small front gardens most of the plants were winding down. A few had mountain ash trees covered in berries and hungry starlings were making short work of these.

One garden had nasturtiums, and their bright flowers were trailing up through a hedge. They had already climbed up a few metres in their effort to reach the weakening light. Although there are few insects around to enjoy their late flowers. I did see a beautiful red admiral butterfly having a sip of nectar. The flowers have a peppery taste and make a delicious addition to salads. Caterpillars will also eat them and the big seeds are easy to gather and store for sowing next spring.

Overhead there was a big commotion as around 200 jackdaws twisted and turned in a black aerial flight. They were all calling and this continued throughout the day during my walk.

At home I have noticed the same behaviour. I was out late at night bringing in a few house plants that have been left outside for a good soaking and fresh air. The local rookery was a hive of activity. I could just make out the trees and the jackdaws were creating quite a din. They were even outdoing the cawing of the rooks. For once the rooks were playing a supporting role.

During the day the rooks and jackdaws mix well as they come in the morning and evening to get seeds and nuts. The jackdaws are the bravest and they will come down first followed by the warier rooks.

On a recent bat walk we passed through a well-lit car park late in the night. The tall trees have a massive rookery in the spring time. The jackdaws were still up and about and we saw them flying between the trees. Bats are not the only creatures affected by the increasing strength of artificial lighting in urban areas.

One of the men on the walk had also noticed the settling behaviour of jackdaws and rooks. Near his house there are tall beech trees. Each evening around 20 minutes before sunset the birds return and lands in the trees. They don’t settle straight away but fly over to the electricity wires that dip under the sheer weight of the birds. Here they caw and chuckle for a few minutes before returning to the trees. They can often repeat this behaviour several times before settling down.

The birds are exchanging complex information such as ‘I found a good and safe feeding ground today, and we should go there tomorrow’. Finding good feeding areas increases one’s social status. Fields with animals are good, as the hooves of the animals and their dung attract grubs.

All of the jackdaw conversation, is about trying to keep the social cohesion of the flock. Even though the summer breeding season is over, the social manoeuvring never really stops. Like a good political party, leaders must by wary of up and coming challengers. At its heart lays access to the best breeding sites, with resources like the prime nesting chimney pots up for grabs.

Jackdaws provide entertainment during autumn when much of nature is quietening down.