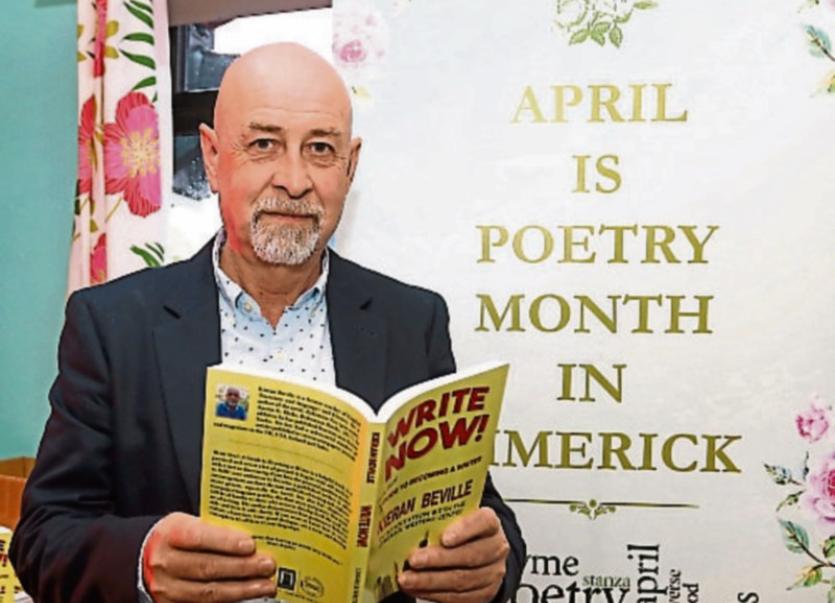 Fool’s Gold is Kieran Beville’s homecoming book of poems with memories of a Limerick childhood, paeans to his mother and father, the young poet’s developing years before branching out into the world where we meet his own family, the pain of separation, his religious and mystical self and the scars of life’s hard lessons prospecting for gold.

The poems endure as physical and spiritual signposts on the poet’s journey back to his roots. Renowned artist John Shinnors painted an original for the cover of this book and Limerick’s beloved Kate Hennessy did the illustrations – an interesting collaboration of visual and verbal forms.

We are invited in to Beville’s Limerick through Matinee at the Savoy, with its cult films of the time, Butter Dish , a reminder of a deeply felt loss, the moving homage to his brother Michael in Still-Life, the masterful use of nature in the homage to his father in The Master Gardener and Swimming Pals; innocence giving way to maturity in On the way to Church, which is worth quoting in full:

Mother knelt to tie my shoelace,

auburn hair glowing in the sun.

With upturned, smiling face she leaned to kiss me

too old to welcome it,

too young to tie my shoe.

But the journey home is not just about childhood places and family memories; it also requires a sort of cleansing, a facing up to love-loss and separation, both personal and spiritual, the children he fathered and the poet’s reasons for writing poems, his search for inner peace. I was particularly struck by the title poem Fool’s Gold which reveals, amongst other revelations, Beville’s relationship with the poem:

For poetry I am but a fool

who hacks until he finds a jewel.

The poem Fragile, with its precise, emotive description of moving house, is much more than a list. It conveys a heart-felt account of separation:

A cigar of carpet.

A clutter of pots and pans.

A suitcase of sacred stuff.

A clatter of cutlery.

A last look at what is lost.

Nothing left to retrieve.

Impossible to calculate the cost.

In the poem Cedar of Lebanon shows the fusion of two cultures and the musician in Beville’s oeuvre with the musicality of the lines:

I thought I heard the cedar sing,

a sirocco song in the humid night

strummed by wind and hummed by sultans

a harmony that made the willow weep.

And the artist/painter in Making Rainbows with its colourful brush strokes in the pining for smells and memories of home.

A distant moment of delight

in shards of broken light.

Love and love-loss, colour and sound, the language of flowers are never too far from the poet’s pen as in The Raven when he scatters his hurts ‘on the ground’ for ‘they are little sorrows/that the sparrows gather round’ or Inconsolably Blue and his symbolic use of laburnum, camellia, white and purple heather, yellow poppy, phlox, geranium, begonia, clematis and that bulb flower montbretia as ‘they argue into the fading light/but they still sleep together in the night’ or the Song of Sorrow itself where we are treated to:

A bog-soft bed beneath my bones

beckons me to rest –

A fog-filled field of ghostly calm.

A haunting in my breast.

The mystical Twilight Trees, Warrior at a Brook and Whispering Winds show Beville’s earlier interest in faiths and beliefs that he found outside his Walls of Limerick and the poems to his children, now adults, bring this book full circle along with the final poem Picking Mushrooms, that very popular Limerick custom.

I was left with the pleasant feeling that the poet has prospected some real gold, his sense of humour and irony intact and that the homecoming is but another beginning.