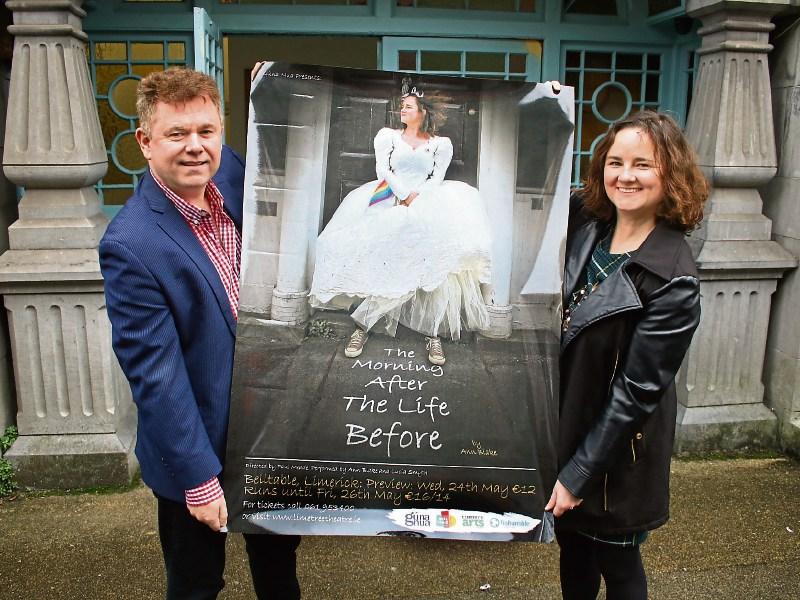 George C Heslin of Origin 1st Irish with Ann Blake, writer of The Morning After The Life Before Picture: Adrian Butler

TWO Limerick plays are to make their American premieres at a New York theatre festival which is dedicated to Irish playwrights.

Origin 1st Irish, the world’s only festival devoted exclusively to producing the plays of contemporary Irish writers, started this week and features Alone It Stands by John Breen and The Morning After the Life Before by Ann Blake.

Breen’s Alone It Stands re-enacts Munster’s famous 1978 win over the All-Blacks, while Blake’s The Morning After the Life Before is a new work and a personal tale that reflects on the seismic events of the marriage equality referendum and its aftermath.

The Limerick woman’s play is also directed by Paul Meade, a fellow local.

The Origin 1st Irish festival was also founded by a Limerick man in George C Heslin, who created it to showcase Irish theatre in New York. Speaking to the Leader on a recent return visit home, Heslin, who founded Origin Theatre Company to offer American audiences the chance to see work by new and emerging European playwrights, said the festival was “delighted to be working with Ann and Limerick artists in general”.

“It is called the 1st Irish festival because it is the first and only festival in the world dedicated to playwrights from the island of Ireland,” explained George, who said the “stars had aligned” to present Alone It Stands in New York, where it boasts an Irish cast that are rehearsing in the Big Apple.

Blake’s The Morning After the Life Before, which also stars Lucia Smyth as well as the playwright herself, has been performed in the UK and Montreal - where it was described as an “an absolute cannot-miss” - but the Origin 1st Irish show will mark its US premiere.

“It is unbelievable, it is huge and the festival itself is a really prestigious one that champions Irish work, so to be selected and programmed is fantastic,” said Ann.

“It is very special because of the Limerick connection with George as well. But for myself, it is huge to go from putting a show on in Limerick to a year and a half later premiering in New York.”

While celebrating the historic vote for marriage equality, the play is one that, in Blake’s words, is a “personal, entertaining tale of weddings, ‘coming out’ and arguments over who takes out the bins”.

“It is an Irish story but it is an international one as well, so we are really looking forward to seeing the American take on it,” she says. “Certainly it is a very confident, smooth show now - there is nothing like doing a show over 40 times to make it a much more solid thing,” she explains of her creation.

“I do feel it is a storytelling show really and it is what we do as Irish people, it is a huge part of who we are and I think this is a personal story that connects with people on a day to day level. I am really excited and looking forward to meeting US audiences and seeing their reaction and connecting with that.”