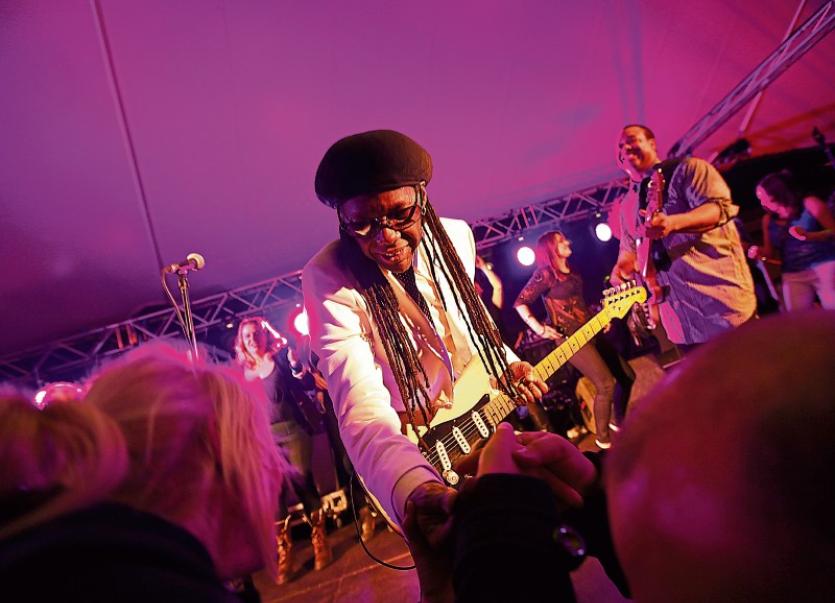 THE lucky fans with tickets for the sold-out Electric Picnic music and arts festival will welcome the addition of Nile Rodgers & Chic to the line-up.

Hermitage Green and Blindboy Boatclub of The Rubberbandits were also among a slew of new acts announced for the upcoming festival recently, which closes out the summer in Stradbally later this month.

The Grammy Award winning, funk generating, chart-topping musical Chic frontman Nile Rodgers, who has performed in Limerick twice in recent years, is Stradbally-bound for a night of classic tunes, it was announced this Wednesday.

The legendary hitmaker is one of the most prolific musicians to ever grace the stage and he’s still getting down with it having scrawled his musical signature across such legends as Diana Ross, David Bowie, Madonna and Daft Punk.

The much loved Rodgers and Chic will perform on the main stage at the Picnic, a spokesperson said.

Hermitage Green are among a list of additions to the line-up announced that also includes The Prodigy, Picture This, Walking on Cars, The Coronas, Gavin James, Gomez and Ash for the music and arts festival taking place from August 31 to September 2, that already includes Kendrick Lamar, Massive Attack and NERD among its headliners.

Meanwhile, taking his seat centre stage at the MindField area is Blindboy, who will host a talk on foreign affairs and Brexit, as well as presenting live editions of his massively popular podcast, now listened to by a worldwide audience of 200,000 every week.

Electric Picnic has also announced details of the Trailer Park area, the main stage of which is a repurposed mobile home, with Galway Street Club, Interskalactic, Attention Bebe, Stomptown Brass among those taking to the quirky stage.

And Warsaw Radio - fronted by Limerick’s Brian McNamara - play the Jerry Fish Electric Sideshow, as do Get Down Edits, Le Galaxie and a whole lot more.