Run For Your Wife: Broadway play on its way to Rearcross Hall 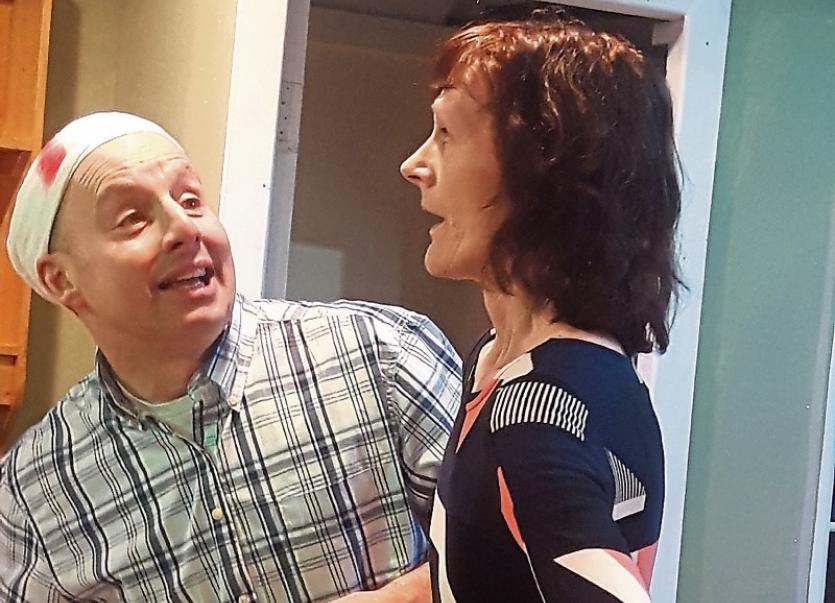 Padraig Ryan and Joan Corcoran rehearsing for Run for your Wife

A LAUGH a minute play is making its belated appearance to a stage near you this weekend.

Rearcross Drama Group’s production of Ray Cooney’s show was due to start last weekend but was postponed due to the sad passing of popular local man Seamus Shortt. He was a great friend of the cast and the crew and he will be in everyone’s thoughts this weekend.

Run for your Wife commences in Rearcross Hall this Friday, March 23 with shows also on Saturday and Sunday, March 24 and March 25 at 8.30pm. The two rescheduled shows take place on Easter Sunday and Easter Monday at 8.30pm.

The play is as usual expertly directed by Gerry Boyle, who is also the director of Teagasc. There is a strong agricultural theme as the play is mainly based around the life of taxi driver John Smith, played by well-know Cappamore dairy farmer Padraig Ryan.

John is involved in a mugging incident, ending up in hospital with concussion. This is of great concern to his many loved ones, especially Mary and Barbara (played by Joan Corcoran and Nancy Caplis).

However, when the suspicious policemen (Paddy McLoughlin and Tommy O’Dwyer) investigate they realise that there is confusion over Mr Smith's address. To make the water even muddier a newspaper reporter (Siobhan Corcoran) is very interested in this storyline and sticks her oar in. Also, two lodgers (Michael Corcoran and Martin Murphy) are involved but are they a help or a hindrance? This is all a major worry to John.

A great night’s entertainment is guaranteed.