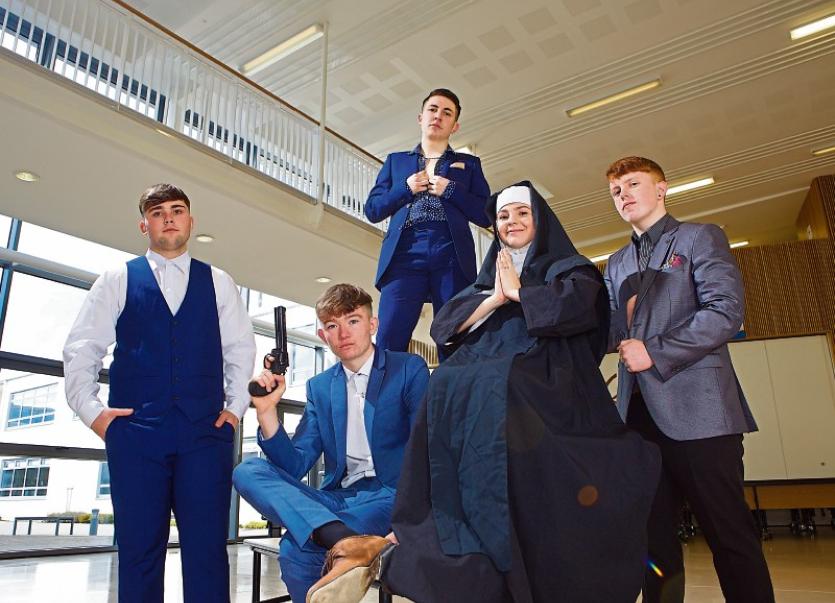 Some of the cast of the musical Back in the Habit at Colaiste Ide agus Iosef, Abbeyfeale

THE anticipated spell of bad weather later this week has claimed a casualty – the school musical in the County Limerick town of Abbeyfeale.

The impending Storm Emma has forced Colaiste Ide agus Iosef, Abbeyfeale to reschedule this year's musical Back in the Habit.

The comedy based on the hit musical, Sister Act was due to be performed this week but performances will now take place in the school hall next Tuesday and Thursday, March 6 and 8.

Transition Year students have been working on the comedy with producer Honor Hurley for  the past two months.

Transition Year co-ordinator Con Healy said: “We are looking forward to this production as we know seeing some of the rehearsals that it will be a very enjoyable evening and this is due in no small part to the commitment and work rate of each student.

“While the rescheduling is unfortunate, we hope that by doing this it allows for a greater audience to attend.”

Back in the Habit is the fifth musical staged by the community college since it opened in 2011 and is a huge community event with in excess of 2,000 people young and old attending every year.

This year's production has a large cast that includes over 15 nuns and is set in Philadelphia. None of the large cast have ever set foot on stage in a drama or musical production before.

Caoimhe Pegley, who stars in the production, said: " I think it's important to bear in mind that this is the first time majority of the cast will have been involved in a production like this or even the first time they've been on stage! Because of this a few members had to work really hard at controlling their nerves and becoming more confident in their ability to deliver on the night.

"It's safe to say the entire cast has found watching the musical come together very rewarding. Honestly some of the most rewarding moments during the whole experience were the small things like, practicing a song over and over again and then finally getting it right. It was all those small achievements like, finally getting a scene right or mastering a dance that kept everyone going," she added.