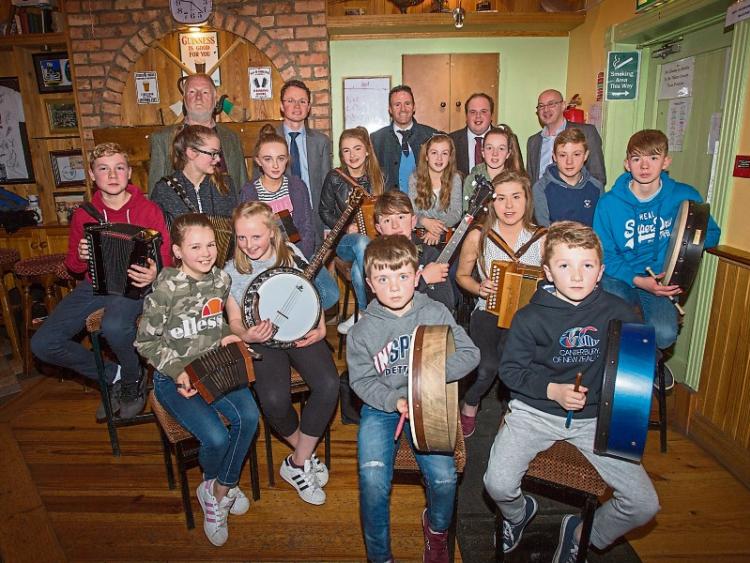 A group of local musicians were pictured with councillors Jerome Scanlan, Adam Teskey and Michael Collins as well as Minister Patrick O'Donovan and Tom Neville TD at the launch Picture: Marie Keating

DRAMA is embedded in the DNA in West Limerick, Minister of State for Finance Patrick O’Donovan said at the launch of this year’s West Limerick Drama Festival which will take place in Knockaderry next month.

And he named several drama groups in the West Limerick area, all of which are currently staging productions.

“West Limerick is a place of mind,” the Minister continued, extolling the volunteering spirit of the area and paying particular tribute to Knockaderry Clouncagh. “There is great spirit in this community,” he said. “It has been very resilient. Ye really have the finest of volunteers.”

The minister’s party colleague, Tom Neville TD, spoke of his own love for acting, having started out in amateur drama before taking drama classes and doing film work.

Drama, he said, is about community. “That is its beauty. It brings everybody together no matter what background and you get to know so many people and discover different sides to yourself. It is an extremely powerful thing,” he said.

An enormous amount of work goes on to make a drama festival possible, the chairman of the Newcastle West Municipal District, Cllr Michael Collins said and he acknowledged the work of those on stage and behind the scenes. The West Limerick Drama Festival, he added, had built up a good track record.

Cllr Jerome Scanlan and Cllr Adam Teskey also spoke, paying tribute to those who made it possible while the chairman of the community council, Darragh Moloney also commended the local drama group which organises the festival each year. “They are a great bunch,” he said, adding that the new, €10,000 sound and lighting system would be a great asset this year.

“We are now in our sixth year,” Mike O’Connor, the chairman of the Knockaderry Clouncagh Drama Society said. “At the time we started we were going through recession.”

This year’s festival will open on Saturday, March 3 with the Knockaderry Clouncagh’s production of The Cripple of Inishmaan, by Martin McDonagh, whose film Three Billboards outside Ebbing, Missouri took all the top awards at last weekend’s BAFTA awards and is tipped for Oscar glory.

This will be followed on Sunday by the Glórach Drama Group from Abbeyfeale with their production of The Two Loves of Gabriel Foley by Jimmy Keary.

The following weekend will see three nights of drama. On Friday, March 9, the Feohanagh Castlemahon Players will cross the parish boundary and put on Family Fever by Sam Cree; on Saturday, March 10, the Seamus O’Kelly Players from Loughrea make a return visit with John B Keane’s Big Maggie and on the final night, Take 5 Drama Group from Cork will take to the stage with Dead Certain by Marcus Lloyd.

All plays will be staged at the Knockaderry Resource Centre and the curtain will go up each night at 8pm. The adjudicator for this year’s festival is Tony McCleane Fay and the awards will be announced on the final night.