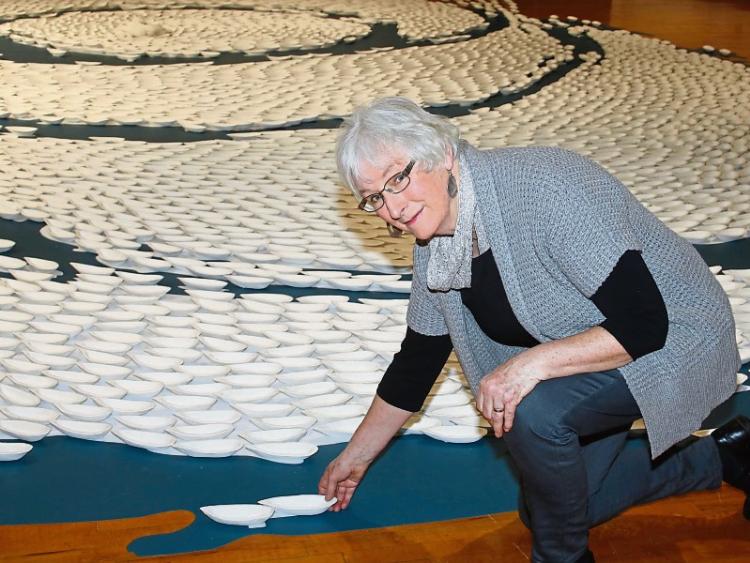 The stunning art installation of over 5,000 ceramic boats is on display in UL in the Bourne Vincent gallery

A COUNTY Limerick artist has created an installation that will bring home to everyone who sees it how many have died trying to find a new home.

Sheila Stone, Castleconnell, has made 5,000 ceramic boats to honour the migrants who drowned in the Mediterranean in 2016. The art installation will be on display in the University of Limerick in the Bourne Vincent gallery from this Friday, December 1 when it is officially opened.

“We, whether it fills our headlines or not, are still connected to the largest mass exodus in human history. The NGOs are leaving. But the people are stuck. The Mediterranean has become a mass grave. In this time of global upheaval how do we reconnect to our human family? How do we take in the suffering and feel empowered to act?” asks Ms Stone.

“This loss of life was the largest in a single year and it's still hard to fathom the expanse of it,” she said.

Ms Stone's work is personal and political, attempting to give meaning to numbers by making space for their enormity. She has, with the help of friends, students and local community groups, made over five thousand beautifully crafted boats. The finished art installation is of 5,022 and is entitled Charon’s Boats.

“The name of the project is a reference to Charon – the boatman of Greek mythology who was paid to ferry the dead to the next life. Like his passengers these families; mothers, fathers, children, uncles, grandmothers, were paying out for a doomed passage,” said Ms Stone.

She began this project to engage the public with something overwhelming in a tangible way. “Sometimes numbers don't mean very much. Seeing it, laid out in front of you, it's harder to look away. And for every person who has volunteered their time making these boats, the connection to a distant hurt becomes stronger,” said Ms Stone, who thanked everyone for their support and help and particularly Yvonne Davis Visual and Patricia Moriarty, arts officers in UL. The university has paid for a light artist and their work makes it look like the ceramic boats are moving in the soft grey ripples.

The exhibition runs from December 1 to December 21, Monday to Friday from 9.30am to 5.30pm. It then reopens when college resumes in January.