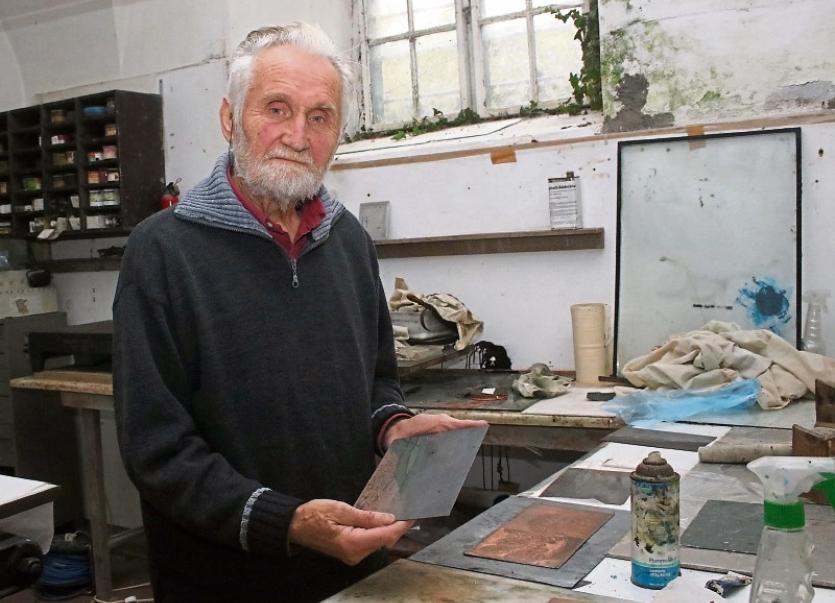 Dietrich Blodau, whose retrospective opens at The Hunt Museum this Friday

SINCE he first came to the Limerick School of Art and Design almost 50 years ago, Dietrich Blodau has played mentor and midwife to several generations of young artists and printmakers.

But now, The Hunt Museum is to host a retrospective of Dietrich’s own life’s work. The retrospective, A Life of Observations, opens this Friday evening and is intended to honour his artistic achievements and his contribution to the arts in Ireland.

But, it also happens to mark his 80th birthday.

The works on display stretch back as far as his early graphic design from the late 1950s and include his competition-winning poster for the 1959 Dortmund Garden Show. But more recent works were created during a residency with the Heinrich Böll Association in Achill Island.

There is, he said, one from nearly every year of his artistic working life.

“This is an extraordinary exhibition which gives us a view of the extraordinary achievements of this steadfast, prodigious, and committed artist who has contributed so much to the artistic life of Ireland,” says Naomi O’Nolan, Head of Collections and Exhibitions at the Hunt Museum.

It is the first comprehensive exhibition of Dietrich’s work and includes prints, pastels and drawings of his subjects which encompass nature, landscapes and townscapes.

The exhibition will run until January 14 at the Hunt Museum. A full interview tracing Dietrich Blodau’s life and work will appear in next week’s Limerick Leader.