Raising the curtain on The Cripple of Inishmaan in Knockaderry 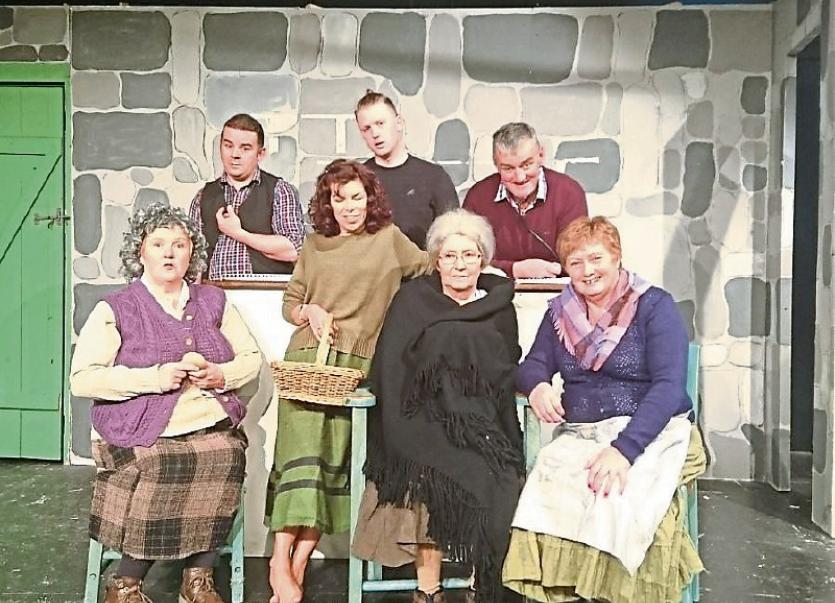 The cast of The Cripple of Inishmaan which opens in Knockaderry on Sunday, November 26

TWENTY years after it was first staged, the Knockaderry Clouncagh Drama Society is gearing up for its own production of the Martin McDonagh play, The Cripple of Inishmaan.

The curtain goes up on the play on Sunday, November 26 with two further performances the following weekend.

With a cast of nine, it is the first time Mike O’Connor has directed a Martin McDonagh play.

“It’s a great play and it has been described as a strange, comic tale,” Mike explains. The play is set on the island of Inishmaan in the 1930s where life is tough and there is not that much to do.

One of the central characters, a young man named Billy,  is physically handicapped and known to his family and neighbours as Cripple Billy. But when a Hollywood film crew shows up on the island, Billy sees his chance to leave. However,  he discovers that not everything is as he dreamed them to be.

Another plotline involves Billy’s desire to know the truth behind the deaths of his parents who drowned shortly after he was born. Central to this and all the island’s many other secrets  is Johnnypateenmike, the island’s notorious gossiper. The role, which carries the most lines, was played by Pat Shortt in a Broadway production but in Knockaderry,  it falls to John Collins from Monagea to portray the scrufulous character.

“We have a good cast, a varied cast,” Mike O’Connor says.

The cast includes  mother and son Geraldine and Cormac O’Connor, with Cormac making his debut appearance on stage. And there is a father and daughter involvement too. John Collin’s daughter Rachel is stage manager.

Johnny Corkery, who plays the part of Billy in the play is relishing the challenge of the role, played on Broadway by Daniel Radcliffe.

“There is an awful lot of dark comedy in it,” he says. And the challenge is to get this across.

McDonagh’s characters, he believes, are exaggerated for the sake of dramatic effect.

“You have to be into dark humour,” he goes on. But he is delighted to have the chance of performing in the play.

“I was very anxious to do this play.”

“We have about 20 people  involved in total, including backstage” Mike O’Connor  explains.

Rehearsals have been taking place since September. “We are ready to go now,” Mike adds.

The curtain goes up on The Cripple of Inishmaan at 8pm on Sunday, November 26 at 8pm with further performances  the following weekend on Friday, December 1 and Sunday, December 3. Tickets cost €10 at the door.