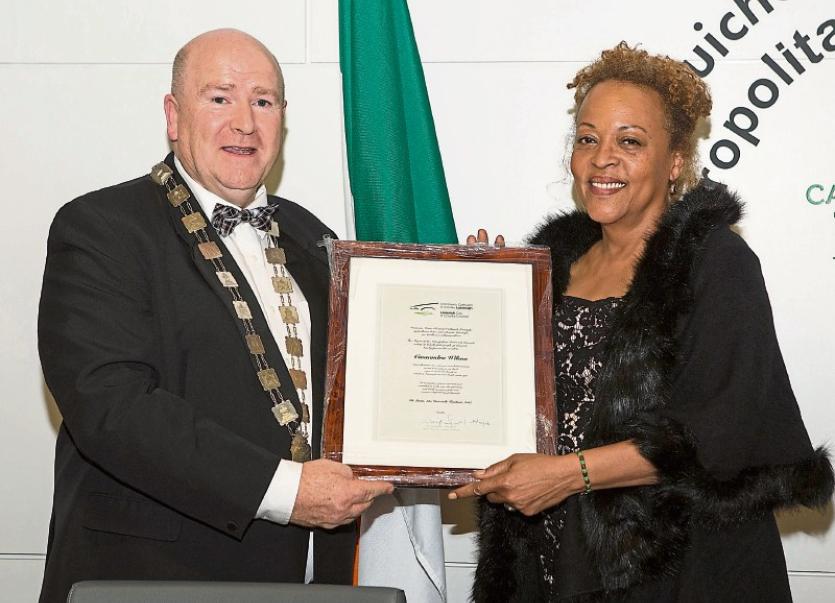 JAZZ icon Cassandra Wilson is set to perform in Dolan’s in Limerick this Saturday, after receiving a civic honour from the metropolitan mayor.

The multi-Grammy award winning singer received a mayoral reception from Cllr Sean Lynch, who described her as “an extremely gifted jazz musician, vocalist, songwriter and producer”.

It is the only second time Cassandra has received a civic honour, having previously been granted the keys to Clarksville, in honour of the Monkees track, the Last Train to Clarksville, which she covered in 1995. The singer, who hails from Jackson in Mississippi, said: “I’m so grateful to the mayor. I have never had a reception like this in my life. This is the first time I have been honoured in Ireland.”

Cassandra – who has won 13 musical awards, and collaborated with countless artists – will perform for Limerick Jazz. It was John Daly of the Limerick Jazz Society who linked up with Cassandra’s guitarist Dubliner David O’Rourke to bring the star here.

“We had a press launch for the Limerick Jazz festival and Mayor Sean Lynch was good enough to open it up for us. We were talking to Cassandra and felt it would be fantastic to give her a nice welcome,” he explained.

And teacher, hurler and guitarist Brian Finn, Bruff, was given a big surprise when Cassandra herself asked if he would perform by her side at her gig.

While here, she is researching her Irish roots.

“I’ve been to Ireland three times, but I’ve always wanted to get out of the bigger cities. And Limerick is the only city in the world which is in the dictionary!”

Cllr Lynch told Cassandra: “I know you are very creative in your music and you are not afraid to take a chance crossing from funk blues to folk music, from rep to vintage country blues or acoustic blues to soul rock.”