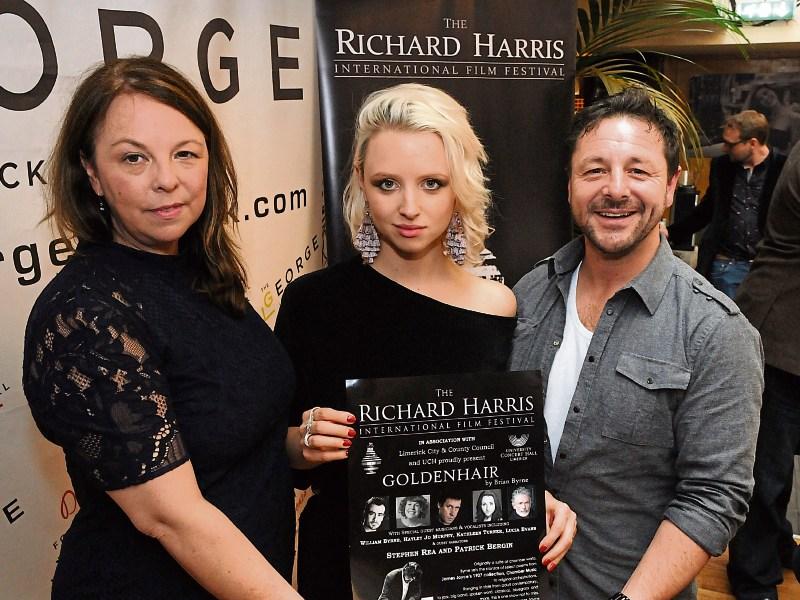 Sylvia Moore, Dora Gola and Zeb Moore at the launch of the festival, which takes place from Thursday to Monday. See www.richardharrisfilmfestival.com

RICHARD Harris’ son, Jamie, a film star in his own right, will attend this weekend’s film festival in honour of his late father in Limerick.

Also attending the five day Richard Harris International Film Festival, which kicks off on Thursday with an event at LIT’s Millennium Theatre, is a location scout for Star Wars, actor Patrick Bergin, and Richard’s granddaughter Ella - a staunch supporter of the event since its inception.

While Mad Men star Jared Harris is unable to attend the fifth annual staging due to filming commitments, his brother Jamie, known for roles in Rise of the Planet of the Apes and Marvel TV show Agents of S.H.I.E.L.D., will attend for the first time since 2014.

Harris will narrate a live script read of For The Good of the Child at the Belltable, which will also feature Bergin and John Connors from Love/Hate, while he will join Sleeping with the Enemy star Bergin at the UCH for a musical performance of Goldenhair by composer Brian Byrne, which features locally based singer Kathleen Turner, among others.

All told, the festival - which received funding to the tune of €30,000 from the council under its General Municipal Allocation (GMA) scheme this year - will screen nine features and over 100 short films over five days, including a screening of the Richard Harris-starring Cry the Beloved Country, directed by Darrell Roodt, who will join members of the Harris family at the Belltable.

There is also a Culture at the Castle event at King John’s taking place among the many events.

David O’Reilly, a feature film location scout who has worked on films such as Rogue One, Inception, The Dark Knight Rises and Harry Potter, is one of those selected to screen his film Kubrick By Candlelight at the festival.

“I’m incredibly honoured and excited to have been selected by the RHIFF. I’ve been a lifelong fan of Richard Harris’ astounding work so this is a very special moment for myself and all the cast and crew,” he said.

Speaking at the launch of the festival recently, festival director Zeb Moore pointed to it receiving Ifta (Irish Film and Television Academy) accreditation this year, allowing screened films to qualify for Ifta awards, as evidence of its continued growth. It also has a link up with the Newport Beach film festival and has joined forces with LIT’s Limerick Film Festival this year.

“The collaboration with the Limerick Film Festival is significant because it does change our dynamic, but it makes us more structurally viable moving forward. We are creating a really, really strong core team that will drive this festival on for the next five to 10 years, easily,” he said.