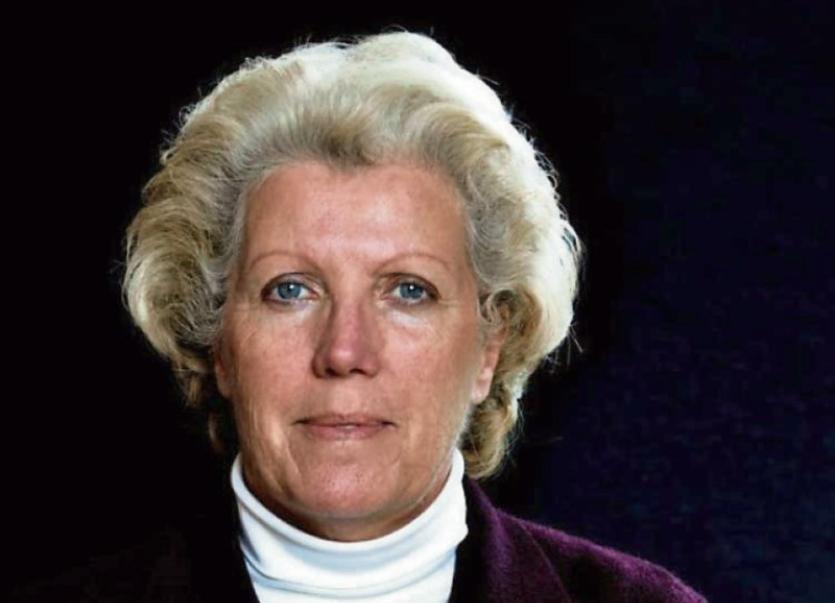 On a mission: Author Ros Pearl

ROS Pearl is a woman in a hurry. Or simply perhaps a woman on a roll and having the time of her life.

She began writing her first novel, a thriller, A Strange Way to Die, when she was 60. Now, having just seen her tenth grandchild christened, she has sent her second novel, a sequel called Dying for Power,  out into the world. And she has the third well under way.

“You have got to be disciplined. But to me it is pleasure. It is exciting. I just really enjoy it.”

Writing has opened up a whole new way of life for Ros, for whom Ballingarry has been home for the past 17 years. And she has put her the experience to work in Dying for Power, a fast-paced and action-packed thriller centred around  H  Hiroshi Suzuki, a Japanese secret service agent who just happens to be the son of James Bond.

The Mustard Seed and Echo Lodge in Ballingarry provide  the setting for one of H’s romantic conquests. Knockfierna Hill gets an honourable mention as does  Dan Mullane, the original owner of The Mustard Seed, as well as John Edwards, the new owner.

“At least I didn't blow up the Mustard Seed in the book,” Ros jokes. “I just did it as a thank you to Dan for all his friendship since we came here and also to John. They are really good friends.”

She thoroughly enjoyed writing about the Irish connection, she says. And she is delighted that so many local readers have also enjoyed the Irish inclusions. “The feedback this time from friends and people who bought it has been so positive. Most people say they prefer it to the first one.”

That first book, A Strange Way to Die, was a collaboration with her son-in-law, George Bamford, who has made his name modifying and personalising luxury brand goods and designed the book cover.  An avid James Bond fan, George was “tantalised” by a reference in the final pages of You Only Live Twice by Bond author Ian Fleming which hints that Bond’s girlfriend Kissy Suzuki is expecting his child, Ros explains

From this, George began to weave various stories and scenarios about this Bond “baby” and Ros, who had honed her craft writing articles, was persuaded by her daughter, Leonora,  to do the writing.

“The first time, we didn't work to a strict plan. George had the first idea. I started writing and different ideas started to emerge. I knew the beginning and the end but it was very fluid in the middle,” Ros explains.

“This time, before I started, I went through ideas with him and what I thought would happen,” she adds. She mapped it all  out over nine pages. “I had a structure. I didn't feel I had to rigidly stick to it but having that structure made a big difference. It made it easy to  continue, for it to flow along.”

In all, she says, it took about ten months to write, from beginning to first draft. She wrote most days, picking up the following day by reading her last paragraph or last chapter.

The basic thread in the book is the lengths that H must go to prevent the formula for a top-secret and deadly weapon falling into the hands of a greedy Chinese billionairess and her “customers” who are hell bent on destabilising Japan. But the story is laced with intrigue, with action, with romance (naturally)  and a little bit of bromance too. And as in the first book, Ros has done very careful research to ensure the details are right.

“I don’t know about guns,” she explains. But she asked the experts. And she goes to great lengths to find out things. “I have had people put me in armlock,.. throw me around the place,” she laughs.

“You meet so many interesting people who are generous with their time in helping,” she goes on. “I learn a little every day and so much outside my normal comfort zone.”

The third book is already well in hand. But she hesitates to say how far she will take what has turned out to be a series. “I don’t want to hack it to death.”

But chances are, the appetite for the main character H is only going to grow as he grows ever-more rounded with each book.

“In my mind, it is a film,” says Ros decisively.  In her mind too, other writing projects  are beginning to emerge. But, she says:  "I am enjoying doing this at the moment. It is something that is really gratifying."

The rest will come. You can bank on that. A woman on a roll, for sure.

Dying for Power by R. Pearl and G. Stamford is available on Amazon in ebook or book form.