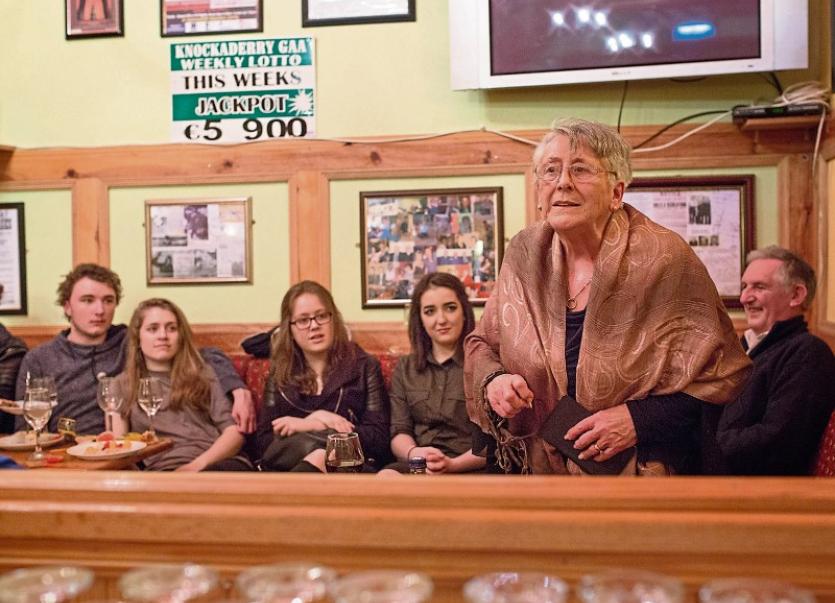 May O'Halloran performing at the launch Picture: Marie Keating

ONE of Limerick’s grande-dames of the stage, May O’Halloran certainly has a way with her.

After more than 40 years in the world of stage craft, both as actor and teacher, she was as mesmerising as ever when she turned up in Knockaderry to launch the details of the West Limerick Drama Festival last week and then proceeded to give a mini-masterclass in acting.

“She went down a treat,” festival chairman Michael O’Connor said. “She gave us excerpts from three Irish writers  which went down very well.”

Happily, May will be back in Knockaderry Resource Centre this Friday night when she will officially open the festival which will run over two weekends and where she will also act as adjudicator.

“I am looking forward to it,” said the woman whose stage life began with the College Players, a move which brought her on to a world stage representing Ireland in World Theatre Festivals in Monaco, Japan and Finland.

May has also appeared with the Cecilian Musical Society and Le Groupe in several musicals and has appeared with Pat Shortt on the TV series Mattie. With Pearl Kiely, she formed the Expressive Arts Theatre School in Limerick almost three decades ago.

“My objective as adjudicator is to be as helpful as I possibly can,” she said in advance of Friday’s festival opening. And she praised drama groups and the West Limerick Drama Festival for “keeping the theatre scene alive”.

“This is our fifth West Limerick Drama Festival,” Mr O’Connor explained to the Limerick Leader.

“The impetus to create a drama festival in West Limerick came following years of yearly and sometimes twice-yearly productions by the local Knockaderry Clouncagh Drama Society and also followed on a renaissance of drama groups in the wider area.

Originally, Mr O’Connor explained, the hope was to get on the official  circuit for the All-Ireland Drama Festival held each year in Athlone but so far this has not transpired.

However, the festival has built up its own following and momentum among amateur drama groups around the country and has also built up a loyal audience locally.

“It is very important for Knockaderry and the surrounding areas,” Mr O’Connor said. “It is also very much a community effort here in Knockaderry Clouncagh.”

The festival committee works hard to ensure a warm welcome for the audiences that come from Limerick and other counties for the two weekends of the festival.

This year will be the first festival without an entry from the Knockaderry Clouncagh Drama Soceity but local interest will still be maintained with the production  by the Feohanagh Castlemahon Drama Society who open the festival, this Friday night, with It Runs in the Family.

This will followed by a brace of JB Keane plays. The first, Sharon’s Grave, will be performed this Saturday night by the  Sliabh Luachra Drama Society from Scartaglen while the following Thursday, March 9, the Amphitheatre Company Kilkee will perform The Field.

A new departure this year, Mr O’Connor explained, will be a junior play, involving St John’s Youth Theatre from Listowel. Their play, Chat Room, will deal with cyber bullying and will run for 50 minutes on Friday, March 10 but attendance is restricted to those over 16.

That evening, a 16-strong group of young musicians, singers and dancers from the area will also perform, adding to the youth theme of the night.

The festival will conclude on Sunday, March 11 with A Wake in the West, a production from the Glanworth Players from Co Cork. The winners, as judged by May O’Halloran, will also be announced that night.

Tickets for each performance cost €10 or €45 for a season ticket. The curtain goes up each night at 8pm in the Knockaderry Resource Centre.  For advance booking, contact 087-4379170.