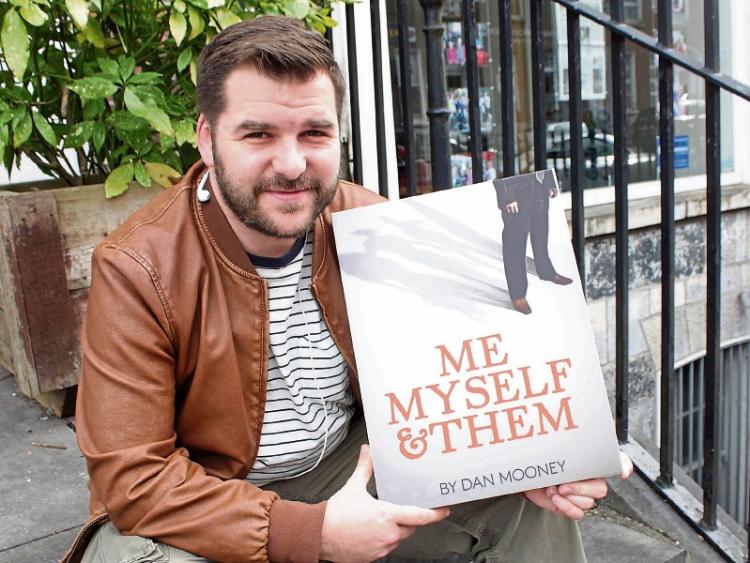 Dan Mooney holding his book Me Myself and Them

SELF-published Limerick author Dan Mooney is one of ten people to be shortlisted for the Luke Bitmead Bursary award.

The award, now in its ninth year, supports the work of struggling and new authors by offering the winner a £2,500 bursary as well as a publishing contract with Legend Press in the UK.

Mr Mooney entered the competition for the first time this summer and was “very excited” to be shortlisted.

“This is a prestigious publishing company who have shortlisted my book. It’s validation for me and it made me feel like I haven’t wasted four years on nothing,” he said.

He spent four years writing and editing his book – Me, Myself and Them: Your Own Worst Enemy – which he published it online on June 14. The book has sold over 200 copies to date.

“One month I’d decide that is was a work of astonishing genius and I was bound to become a Nobel Prize winner and then the next I’d think that it was the worst collecting of words in history,” he recalled.

“I had the first draft written in six months and then I spent the next three and a half years re-reading and editing it until i was happy,” said Mr Mooney, who currently lives in Emmet Place.

He described the book as a “psychological story” that is both “dark and funny” in places.

“The story follows Denis and his four housemates - Denis thinks that they’re his housemates but they’re actually extensions of Denis. The idea is that it’s a story about a man who is losing his mind and he has got four of his split personalities living with him.

“People from the past come back into his life and almost drag him into the real world and who he used to be. But the monsters know what they are and they know that if he’s healthy, they don’t exist, so they turn on him,” he explained.

The 32-year-old said that he “can’t wait” to travel to London on October 28 to discover if he has won the reputable prize.

“I’ll be in a room with the kind of people that I want to be in a room with. If you want to get anywhere as a writer you need to be talking to publishers and literary agents and other writers and making connections.

“Being able to go over to London and meet a few others and be in the same room as publishers and literary agents is just fantastic. It separates me from just another self-published author,” said the proud author.

Mr Mooney has now set his sights on writing a new book, and he is already “five chapters in”.

Me Myself and Them: Your Own Worst Enemy is available to purchase as an eBook on Amazon.