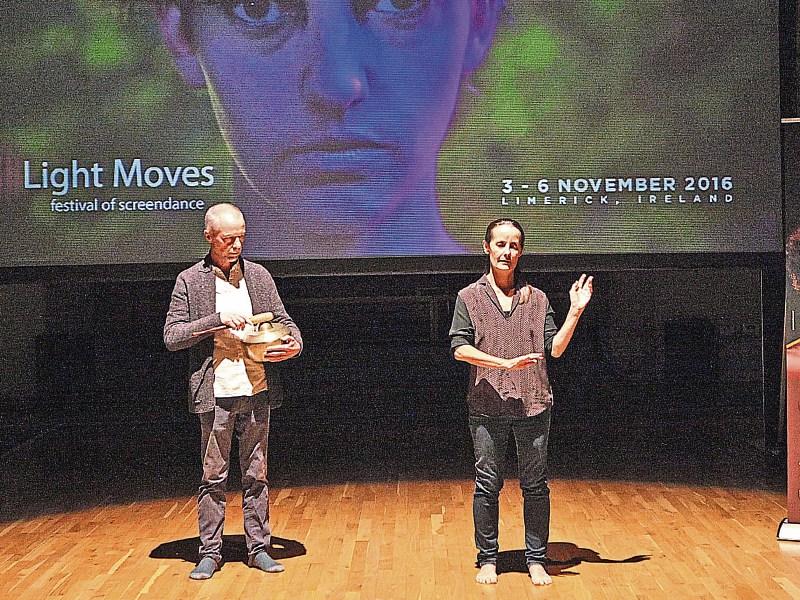 Mel Mercier of the Irish World Academy and Mary Nunan at the launch Pictures: Dave Gaynor

LIGHT Moves, Ireland’s only festival of dance on film, which takes place in Limerick, is back for another outing.

The festival, returning for its third year, boasts a programme that showcases beautiful, thought-provoking and cutting-edge new work across various venues from November 3-6.

This year's festival will feature artists from home and abroad and is an opportunity for audiences both local and international to watch, learn, film, compose, dance, discuss and participate in ‘screendance’.

The programme will include Irish and world premieres, performances, installations, workshops, labs and talks from leading artists and thinkers from across the world and details were announced last week at Dance Limerick – with festival curators Mary Wycherley and Jürgen Simpson  joined by special guest Professor Mel Mercier, chair of performing arts at the Irish World Academy of Music and Dance, to officially launch it.

“We invite you to delve into the rich diversity, boldness and vibrancy of screendance; film experienced through the lens of movement and choreography,” said the curators.

Light Moves will take place in locations across Limerick, including Dance Limerick's home in John's Square with the historic St John's Church, Belltable Arts Centre and Limerick City Gallery of Art. It is produced by Dance Limerick in partnership with DMARC (Digital Media and Arts Research Centre) at the University of Limerick.

The festival includes a special focus on work from Ireland, a participatory project for older people and screenings for young audiences.

Highlights include Jonathan Burrows and Matteo Fargion’s 52 Portraits, two films by Tacita Dean, the festival’s featured artist, three feature-length screenings at the Belltable – Terrence Malick's To The Wonder, Milky Way from Benedek Fliegauf and Michelangelo Frammartino's Le Quattro Volte – with a keynote address by Dr Laura U Marks of Simon Fraser University, Vancouver, plus a selection of the best new short films for children from around the world.