FASHION: GRADUATES FROM LIMERICK SCHOOL OF ART AND DESIGN SHOWCASE WORK TO OVER 400 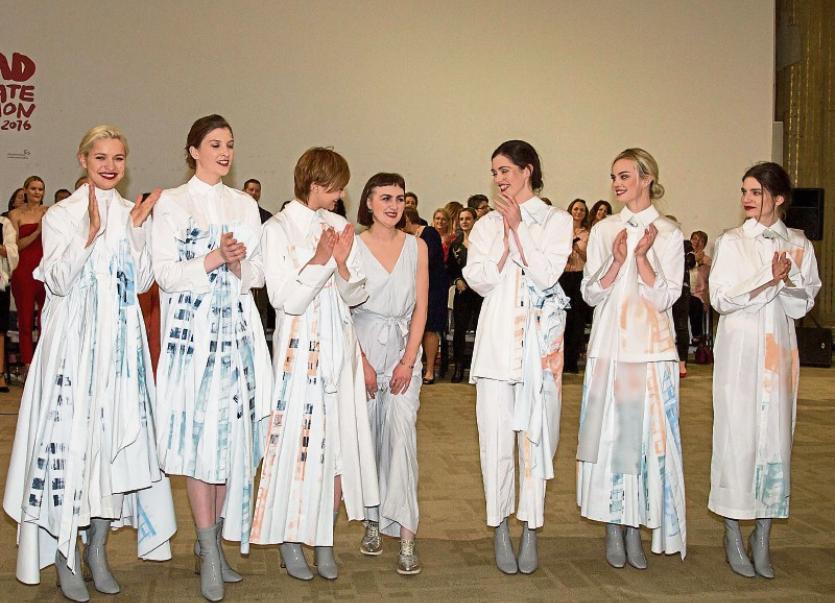 A COLLECTION which encapsulates the recurring nature of Ireland’s housing crisis won the overall prize at the 2016 Limerick School of Art and Design Fashion Show.

A total of 27 graduates showcased their creations to over 400 people who watched the show at the college. The show was produced by renowned retail consultant Eddie Shanahan.

“Civil Contingency encapsulates the recurring nature of the housing issues in Ireland. I want to embody the feeling of history repeating itself, through the process of breaking down and building up,” said Liadán.

“The pleating and print within each piece represents the descent of the Ballymun flats from their beginning in the 1960s as a result of a housing crisis to the final demolition in 2015 during the current crisis.”

Niamh Murray from Chelmsford village, Cork walked away with a €2,000 bursary for demonstrating the most unique cut and technical creativity in her collection entitled Gozen, inspired by Tomoe Gozen, the first Japanese female samurai of the 12th century. Niamh incorporated an innovative cut and intelligent drafting as well as challenging the line and form of the pieces, to convey the warrior’s directional movement throughout the collection.

Ranked among the world’s top 50 fashion colleges, Limerick School of Art and Design is continuing to mould future Irish designers. This year’s students have returned from exciting work placements all over the world including House of Holland, Temperley and Preen in London, Marchesa and Derek Lam in New York and Farrah Floyd in Berlin. The themes of this year’s show were as diverse as the students’ use of fabric, colour and form, including sugar candy, legendary boxer Muhammad Ali, the Greek mythology Circe, deforestation, computer malfunction and the late rocker Kurt Cobain among others.

Speaking about the fashion show, course director Anne Melinn said that the Limerick School of Art and Design, LIT which has enjoyed another successful year “is truly an exceptional college with an enormous amount of talent and a deserved international reputation.

“Our graduates have gone on to work with some of the leading labels in the world including Paul Smith, Marc Jacobs and Alexander McQueen. The students are extremely professional and take enormous pride in their work,” continued Ms Melinn.