Lost Ireland: Scenes of Limerick a century ago 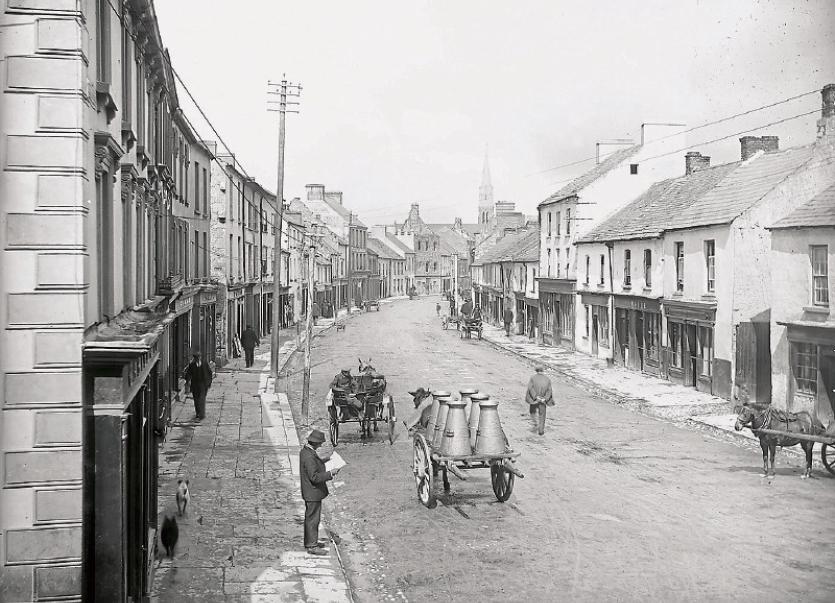 A stunning photograph of life in Sarsfield Street, Kilmallock, more than a century ago, as revealed in a new book, Lost Ireland: 1860 to 1960, by William Derham

IN 1834, it was written of Limerick: “As lovely a county as the imagination can well picture. In variety, and wooded fertility, it is not surpassed by the most celebrated of the English vales, no one of which can boast as an adjunct to its scenery, so noble a river as the Shannon.”

That reflection by the Scottish travel writer and journalist Henry David Inglis is featured in a new book, entitled Lost Ireland: 1860-1960, by William Derham and published by Hyde Park Editions.

Featuring many images of Limerick from over a century ago, the compilation transports the reader back in time, with more than 500 evocative photographs of Ireland, and presents a panoramic sweep of Ireland’s sometimes forgotten heritage.

The present-day author now writes of Limerick many other glowing tributes.

“The opening of Shannon Airport in 1942, just across the river, did much to attract tourism and visitors back to what had become a declining part of the country by the middle of the twentieth century. Although the city and county suffered from much misguided development in the latter half of the century, much remains to be admired. In particular the new town, which was so glowingly described back in 1834, is still well regarded today, as is the old Custom House, the home of the Hunt Museum,” writes Mr Derham in this work.

The book documents the changes wrought by history and what those changes have meant to our buildings from the past, some of which no longer survive.

Drawing on a variety of photographic archives, Mr Derham, curator and guide at Dublin Castle, has compiled a collection of photographs that gives the reader a sample of the built heritage that was lost to the inevitable transformations the country endured over a hundred year period - the humble mud huts of the transient labourer, the ‘thatched mansions’ of the prosperous farmer; the edifices of industrial innovation and technology, and the grand homes of the well-to-do, including the infamous ‘big house’.

“This book provides a snapshot of some of the buildings from Ireland's past that haven't made it to the 21st century, and a couple that have - just about!” said William Derham.

“It will hopefully encourage us to be more aware of what has survived, and to think twice before we let it, too, disappear.”

Among the images of Limerick featured include the one above, of Sarsfield Street in Kilmallock, and the Old Gaol, which was built in 1789 and demolished along with the neighbouring county courthouse in 1988 to make way for new council offices.

Another image is of the Hermitage, Castleconnell which was built in 1800 and destroyed in a fire in 1920.