Curtain to go up on fourth West Limerick Drama Festival 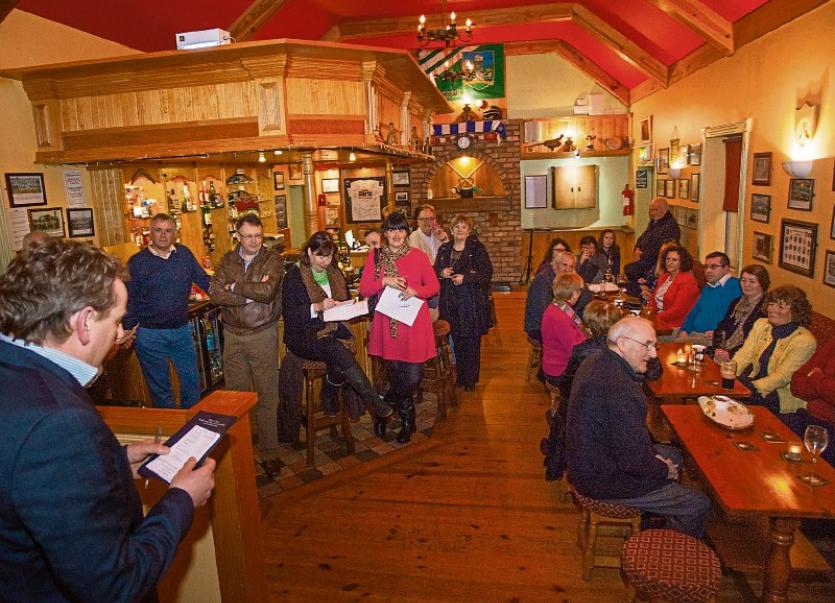 KNOCKADERRY has shaken off the winter blues and is now gearing up for a huge influx of visitors when it hosts the fourth annual West Limerick Drama Festival.

The festival kicks off next Thursday with the first of the seven plays on this year’s programme and up to 2000 people are expected to make their way to the Knockaderry Resource Centre to enjoy this year’s offerings and help copperfasten the festival’s growing reputation and status.

“It is hard to believe this is our fourth festival,” Johnny Corkery, one of the festival founders, said at the festival launch in Knockaderry this week. And he outlined the background to the festival from the setting up of the drama group in Knockaderry Clouncagh in 1997 to the decision to host a festival for the area. “Drama is very rich in this part of the country and we thought we could enhance it more,” he said. “All we want to do is give people a forum. It helps every group to lift its standard. We are fierce happy with the way things are going. We are getting to have a name as a drama hub in West Limerick.”

Now, with the festival just days away, he added: “We are just all drama here. It is what we live, what we breathe.”

And he thanked the local community council for their ongoing support of the festival and of the drama group.”They give us a free hand. And sometimes it’s more a case of we beg for forgiveness rather than ask for permission.”

“There is a brilliant atmosphere for the whole festival,” community council chairman Darragh Moloney said. “It is a massive boost for the parish and it puts us on the map.”

Home advantage on opening night goes to the Knockaderry Clouncagh Drama Group and their production of Martin McDonagh’s A skull in Connemara. But six other groups have signed up for this year’s festival, the Listowel Drama Group, the Tarbert Theatre Group and  the Sliabh Luachra Drama Group from Kerry,  the Glanworth Players from Cork and  the Seamus O’Kelly players from Galway.

The newly-formed Tarbert Theatre Group stands out in that its production  Diarmy  is very contemporary, written by Tarbert woman Mary Lavery Carrig.

“This is my second  adult drama,” Ms Lavery Carrig told the Limerick Leader. A teacher of English and Drama at Tarbert Comprehensive, she regularly writes and produces drama for and with her pupils and her first adult play won a rehearsed reading award in Listowel.

But last year, encouraged by playwright Deirdre Kinahan, she decided to try and get her play Diarmy on to the stage and the Tarbert Theatre Group was born.

The play centres around the thorny issue of the right to cut raised bog which became a national issue in 2013. “At the time, I felt the issue of the right to cut the raised bog was a very polarised issue,” she explained. And she saw extremists on both sides. “I felt there were families who had real feeling and affinity with their piece of bog who were misunderstood.”

When, earlier this year, the play opened in Tarbert, people loved it, Ms Lavery Carrig said. “It went down a bomb in St John’s Listowel.”

And she hopes a West Limerick audience will also connect with the play when it is performed on Friday, March 12.

“I have been 50 years involved in drama,” Owen MacMahon said, explaining that he began with the Listowel Drama Group in 1964. He also recalled his late father, the author, teacher and playwright Bryan MacMahon who often adjudicated at amateur drama festivals. “Words are wonderful,” he said. “My father was fond of words. He collected them like you would collect seashells.” The Listowel Drama Group will perform Noel Coward’s Blithe Spirit on Friday, March 4.

This will be followed on March 5 by Far Off Hills by Lennox Robinson from the Sliabh Luachra Drama Group and the Arra Players will perform A Bad Year for Tomatoes by John Patrick on March 6.

The second weekend of the festival opens with the Tarbert Theatre Group.

This will be followed on March 12 by John B Kean’es The Year of the Hiker with the Glanworth Players and the final night, on Sunday, March 13 will see the Seamus O’Kelly players on stage with Conversations of a Home Coming by Tom Murphy.

This year’s adjudicator is Terry Bryne who is current president of the Association of Drama Adjudicators and also a director, actor and playwright.

As a principal director with Andrews Lane Theatre, his successes included I Keano and One Flew Over the Cuckoo’s Nest. He performed in the Abbey’s 50th anniversary of The Field and appeared on television in Fair City and Ballykissangel.